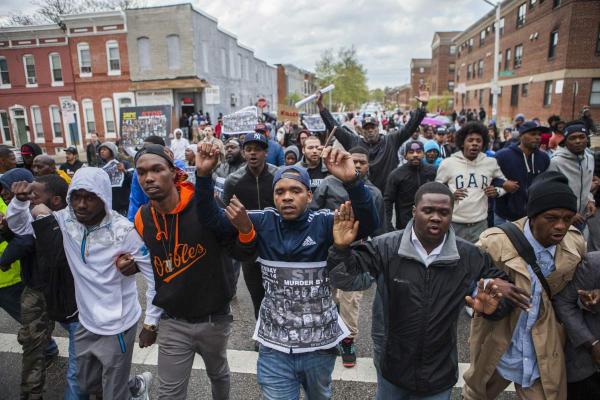 On Wednesday evening, Tawanda Jones stood with friends and family and told a crowd about her brother, Tyrone West, just as she has done every week since his death in July 2013.

She recounted how on July 18, 2013, West was stopped by Baltimore Police Department (BPD) officers and Morgan State University police, pulled out of his car, grabbed, beaten, pepper-sprayed and tased—dead in police custody.

Behind her, there used to be a Confederate statue—removed in 2017 following the white supremacist attack in Charlottesville—and in front of her, a crowd of 100 who gathered in the Wyman Park Dell to protest Johns Hopkins University’s attempts to develop its own armed, private police force.

And because it was April 17, just two days before the anniversary of Freddie Gray’s death in 2015, Jones discussed the Baltimore Uprising, when thousands of Baltimoreans marched for more than a week protesting police brutality, and on April 27 were confronted by police in riot gear, kicking off a wave of looting and rioting through West Baltimore, and a subsequent, selectively enforced curfew.

A Defining Moment for The Real News

“When everybody had their fists in the air and they pulled together, black, brown, white, no matter what your race, sex, creed or anything was, we all pulled together, one cause, one fight, they were so scared they didn’t know what to do,” Jones said. “They started making up lies and they targeted the youth. It wasn’t old folks, the youth got on the front line, the youth took on Baltimore City Police Department.”

This sentiment about the Baltimore Uprising—that it was a youth-led movement organized by those most vulnerable and most affected—even four years later, is still hard for people in power to grasp. Issues such as the city’s poverty, segregation, profoundly underfunded school system, inadequate public transportation (including the end of the Red Line, killed by Governor Larry Hogan), the lead paint crisis, and police corruption remain.

Swimming in Baltimore: How Poverty Works

Baltimore City is now on its fifth police commissioner since the uprising. In 2017, following a year-long investigation, the Department of Justice signed a consent decree with BPD mandating sweeping reform—but change is moving along at a glacial pace. None of the officers charged with Gray’s death were found guilty.

No Federal Charges for Police in Freddie Gray Case

The city has even argued that they are not responsible for damages caused by the Gun Trace Task Force (GTTF), a squad of federally-indicted cops revealed to have been robbing drug dealers and dealing drugs because their actions were so outside the color of the law. RNN’s ongoing coverage of one GTTF victim, Ivan Potts, is just one example of the lives ruined by GTTF. A bill to return the BPD to local control—it has been under control of the state since the 1800s—stalled in the Assembly, in part because of fears it would put the city on the hook for police brutality settlement payouts.

One of the ugliest images of the uprising was when Larry Lomax walked towards Baltimore cops with a “Fuck the Police” shirt on during the city-imposed curfew. He was pepper sprayed by one officer and slammed to the ground by his dreadlocks by another—all live on cable television.

A year later, Lomax and others sued the BPD for misconduct during the uprising. Among those sued were officers we would later learn were tied to GTTF: Daniel Hersl, a member of GTTF; Christopher O’Ree, a lieutenant who oversaw GTTF; and a former associate of GTTF sergeant Wayne Jenkins named Keith Gladstone, who was federally indicted just last month for assisting in planting a BB gun on a man Jenkins ran over back in 2014.

Back in 2015, now-Mayor Catherine Pugh was a state Senator. She developed a reputation as a youth advocate, especially because of her relationship with “Meech” Tucker, a frequent face at protests who was arrested by police a few days after the curfew went into effect. Since then, Pugh was elected mayor and is currently on a leave of absence, engulfed by a seemingly endless scandal in which she used the drummed-up sales of a series of books aimed at the youth—the “Healthy Holly” books—to generate nearly a million dollars for herself and her campaign.

Privatization and Kickbacks: Why the Healthy Holly Scandal Is Bigger Than Baltimore’s Mayor

As The Real News Network’s Paul Jay pointed out to me recently, when the elites at the top are so profoundly corrupt, it is easy to see why those below them, especially the police, would follow suit and try and get theirs.

Perhaps the most jarring sign that city officials have learned nothing since the uprising is the plan to knock down a portion of Gilmor Homes, the housing project where Freddie Gray lived, near where police chased and grabbed him, and ground zero for the Baltimore Uprising. The claims are that knocking the buildings down will increase safety—another short-sighted solution in a city that cannot conceptualize serious systemic change—and there is little consideration of collective memory or the importance of black spaces, let alone serious investment.

And yet, the city continues offering tax breaks to developers, including a record high TIF for Port Covington.

Meanwhile, since 2015, nearly 1,400 Baltimoreans have been murdered, part of a sustained homicide spike that began soon after the uprising for reasons that have, according to officials, ranged from drugs stolen during the uprising creating more street violence to the so-called “Ferguson effect.”

As usual, said Tawanda Jones, whose fervid activism for years before the uprising was a major part of why it happened at all, the answer was simple: The police slowed down, they cared even less about the city than they already did, and they let more people kill each other.

“That’s exactly what they did,” Jones told the crowd this past Wednesday night. “And that’s what they are still doing now.”

Soon after Jones’ speech, the hundred or so people listening to Jones followed her and other activists to the Johns Hopkins University campus to join the ongoing occupation of an administrative building in protest of the university’s private, armed police force.

The bill to allow JHU to create its own private police force was signed into law yesterday, April 18, by Maryland Governor Larry Hogan—the same governor who made the decision in 2015 to bring the National Guard into Baltimore to enforce a curfew and squash dissent.

The city needs radical change, and for a couple weeks in 2015, it seemed like it might get it. But since, it has fallen back on the same failed fixes—more police, less transparency and very little accountability.