A Real News investigation of the city's inclusionary housing law reveals that despite a consensus change is needed, little has been done to fix it

A Real News investigation of the city's inclusionary housing law reveals that despite a consensus change is needed, little has been done to fix it 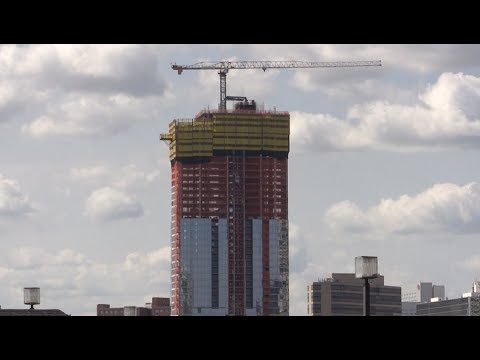 TAYA GRAHAM: This is Taya Graham reporting for The Real News Network in Baltimore City, Maryland. I’m standing at Port Covington, the site of one of the biggest tax breaks in Baltimore City’s history. But the city subsidy to build a mini city on the water raises a question: is the city equally willing to bolster housing for low income residents?

Driving through Port Covington, it’s hard to envision the plans of the Under Armour billionaire Kevin Plank but we do know that Plank received a $600 million dollar TIFF or Tax Increment Finance subsidy to build a luxury city on the water, and it’s not just Plank who’s getting big bucks courtesy of city taxpayers to construct premium housing. Drive around the city and the signs of municipal largesse are everywhere: gleaming towers in Harbor East, waterfront property in Harbor Point and new residential buildings in the downtown. All built with the help of taxpayers and all renting apartments well beyond the reach of the city’s poor or even middle class.

TAYA GRAHAM: This city has a plan where the lower income and moderate income citizens of Baltimore is being priced out of Baltimore.

TAYA GRAHAM: But with luxury downtown development booming, we wondered what about the city’s Inclusionary Housing Law that’s supposed to ensure that all these taxpayer funded projects include affordable housing. Are the taxpayers who are financing the development getting anything in return?

TAYA GRAHAM: To answer that question, we came here to City Hall to a small room on the sixth floor called Legislative Reference to find out what’s going on with the law.

The Inclusionary Housing Law in Baltimore has been controversial and most say largely ineffective.

LUCK CROSBY: We need something in writing to mandate that 60% of the revenue generated for profit revenue go back into creating a stable financial public housing.

TAYA GRAHAM: For one, developers don’t fully pay for the units they’re required to build and another problem has been that many projects, including Port Covington have won exemptions from the law, and to date it has resulted in just 32 units total, so there has been a call to change it.

STEPHEN JANIS: All these apartments are going to be renting for $1,400 a month. I mean, can you see why people might be skeptical that the city isn’t doing enough to bring in affordable housing?

BILL HENRY: Oh, well I’m not aware that anyone who thinks the city isn’t doing enough to bring in affordable housing is being skeptical. I think they’re simply observing the truth.

TAYA GRAHAM: Which is what led us to this largely forgotten office on the sixth floor of City Hall called Legislative Reference to find out what’s being done to fix it. In this nondescript file cabinet tucked in a corner is where we found the minutes from the city’s Inclusionary Housing Board, the body tasked with overseeing the law, and the picture the documents paint isn’t pretty. Efforts to replace the law so that developers have to pay their fair share have stalled.

As of the date, the fund only has $379,000, a far cry from the hundreds of millions of dollars of tax breaks doled out by the city. In fact, in 2015, the Board considered abolishing the law altogether.

JOHN BULLOCK: Well, we’d like to see something that actually works. We sit on those Inclusionary Housing Board meetings, we see that there really isn’t a creative way to actually use those funds. It doesn’t really make sense for a lot of the projects that are currently existing to have a one bedroom or an efficiency unit in sort of one of these developments that’s already on line.

TAYA GRAHAM: Even as the law continues to confound the council, two projects are seeking an exemption. 500 Park Avenue and Bainbridge Development, both luxury projects which begs the question, why is the city so good at giving out tax breaks having such a hard time passing a law to make sure development is equitable?

BILL HENRY: If the project already needs government help to work, then that just puts us on the hook from even more money to build units that way. We should be focusing our attention on building inclusionary units in any project that is so strong they can just build it.

TAYA GRAHAM: We asked and the answers vary.

JOHN BULLOCK: The goal essentially is to really have the suggestions that will move toward a law that works. I want to make sure that we’re listening because I don’t want to just have something that’s pushed through that really isn’t functional. I don’t want to repeat the same challenge that we have at this point, but again having advocates at the table, having even hands and approachable, one that actually comes up with some solutions as something that’s actionable.

TAYA GRAHAM: But the reality remains. In a city where construction cranes dock the skyline, who is looking out for the people paying for it?

Speaker 3: What I am saying is out of ten units being built in this city, six of them should be affordable housing units based upon our tax base and based upon the general population. We’re not growing anybody and we keeping those in who can’t afford to leave.