As student occupation continues, professors join in calls for the university to abandon plan for armed police

As student occupation continues, professors join in calls for the university to abandon plan for armed police 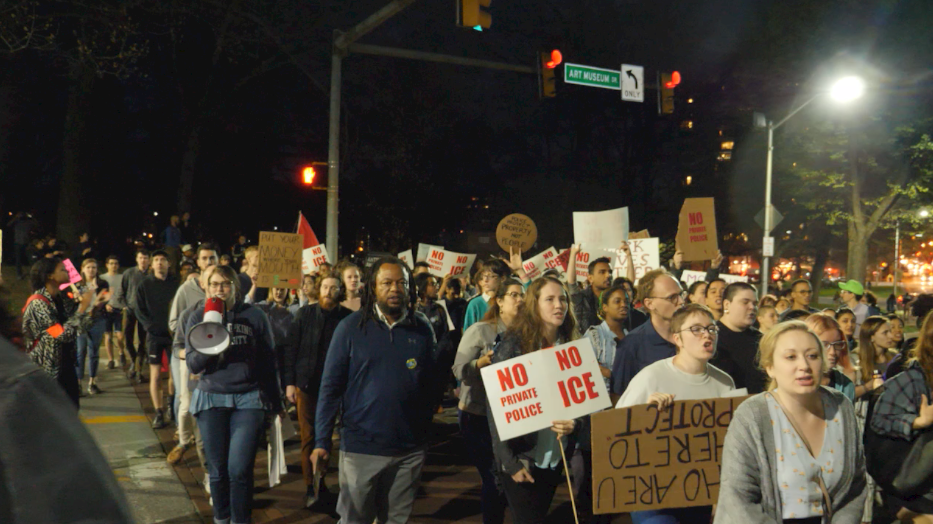 We’re in Baltimore, Maryland, right outside of Johns Hopkins University where hundreds of protesters have gathered here to oppose the university’s multimillion dollar contract with Immigration and Customs Enforcement, as well as a new private police force recently authorized by Maryland lawmakers.

TAWANDA JONES: With his baby in the back seat of the car, getting whacked by the Fourth of July, he was getting ready to go out of town. It’s July the first. He’s like happy, feeling good, just got off of work.

My name is Tawanda Jones and I’m here today because I say no more private police. I’m here in total support of Hopkins with this no police thing that’s going on and also saying no to ice. And also, as always, representing my brother Tyrone West, who was brutally murdered right here in Baltimore City.

JILL CARTER: You all have given me life and hope. JHU and community allies, the work that you’re doing, the protests, the sit-ins, the relentless fight to not allow this law to just take effect, it is exactly what we need. And so, I’m Jill Carter, I’m one of the two Senators in the entire Maryland Senate that voted against the bill. But in that fight, we didn’t win. In fact, some of you were watching, and you know that’s because the fix was in.

JAISAL NOOR: Earlier this week, faculty at Homewood Campus unanimously urged the university to drop its plan for a private police force.

DREW DANIEL: And I was present at the Homewood Faculty Assembly, where we voted unanimously to express our dismay at a private police force on the Hopkins campus. We are entirely opposed to this idea. We also expressed solidarity with the students organizing the sit in, and specifically are asking that the university not penalize any students who are participating in the sit in. This is an example of political speech, and it should be protected.

JAISAL NOOR: Hopkins did not respond to a request for an interview for the story, but they said the police force will be accountable and keep students safe. We asked faculty and students for a response.

BENTLEY ADDISON: My response to that is that the thing that’s endangering Hopkins students isn’t some mythical racialized beast of crime. What’s hurting Hopkins students, what’s making Hopkins students unsafe, is sexual assault of fraternities, is a counseling center that’s it’s woefully understaffed, is the Hopkins administration not standing with undocumented immigrants.

JAISAL NOOR: Earlier today, we visited the site of the occupation and spoke to students there.

JEREMY BERGER: We got here at 1:00 PM on April 3, last Wednesday. So we’ve been here for–this is our eighth day of this sit in. I have slept here six of the last seven nights on the floor, right on that carpet. And people keep telling me to take a break. I went home last night for a break. But I’m not tired and I’m not going to fade anytime soon because the energy in here is outstanding. The level of solidarity between the people in this room, the level of love between the people in this room, is just–I’ve never experienced anything like it.

ERINI LIGERY: This has been absolutely amazing. I’ve been here since day one. A lot of the organizers have been taking breaks to make sure that people aren’t getting too burnt out. And so, what I have seen is this going from a group of very dedicated and interested people to a community really being built.

JEREMY BERGER: So quite frankly, I will be sitting in in this building until our demands are met. As I said, for the past year they’ve ignored the voices of students, faculty, community members, workers. And we’re here to demand that our voices are heard. In terms of the process, they pretty much legalized the bill, Governor Hogan still has to sign it, but the university can and should publicly state that after seeing the outpour of disapproval, they will not go ahead with these plans. Additionally, the contracts with ICE should be terminated immediately, and there’s nothing stopping them from doing that.

JAISAL NOOR: And this isn’t the first occupation here. Can you talk about the previous two, and what the demands were and what the ultimate outcomes were of those?

ERINI LIGERY: Yeah. It was around 2000, 2001, there was an occupation here for the low wage workers of the campus. And so, they banded together and demanded for a living wage. There was a lot of community support, there was a lot of community unions that came in supporting it, as well as a lot of campus support from undergraduate and graduate students and faculty students who were rallying for the workers to be able to make enough money to survive and to have their most basic needs met. And so, that happened here.

And then, in the mid to late 80s, there was a protest basically calling out Hopkins for their complicity with the apartheid situation in South Africa. And so, very similar kind of moral question between what the ICE contracts are, what they represent, how they are giving a financial backing to a fundamentally racist and problematic institution. That statement works for both these ICE contracts and the complicity within the apartheid scenario.

JAISAL NOOR: So far, Hopkins has given no indication it plans to change course on its contracts with ICE or its armed private police force. The Real News will keep following the story. In Baltimore, I’m Jaisal Noor.

This is Not a Drill: LIVE, July 1st

Stir Crazy! Episode #61: COVID & Cops: We Are Under Attack