Jimmy Carter says: "Election Process in Venezuela is the Best in the World" 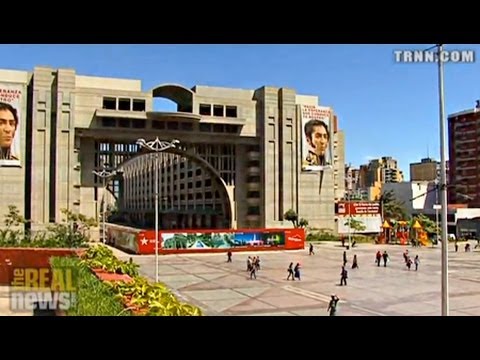 VOICEOVER: Elections are just days away in Venezuela, and presidential campaigns have come to a close as the state finalizes preparations before opening the polls on Sunday, October 7th. The countryâ€™s electoral system has been the topic of great discussion as all eyes turn to Venezuela to see whether they will reelect socialist President Hugo Chavez to a third term, or whether the oppositionâ€™s candidate Henrique Capriles Radonski will be able to close in on Chavezâ€™s projected double digit lead in the polls to secure the first opposition presidential victory since Chavez was first elected 14 years ago. While most observers have praised the technological advances of the Venezuelan voting system, others have cast doubts on the electoral process (show McClatchy DC piece â€œelection system high tech but low trustâ€).

DAVID DOUGHERTY, CARACAS, VENEZUELA: This is the headquarters of the National Electoral Council, known by its Spanish acronym as the CNE, one of the five independent branches of government in the Bolivarian Republic of Venezuela. Its task is to administer and oversee the electoral process, and it is headed by 5 officials, which include representatives of both the current administration, as well as the political opposition.

VOICEOVER: The Real News spoke with one of the 5 officials at the CNE Tania Dâ€™Amelio. She explains that Venezuela has updated its completely automated electoral system with an integrated thumbprint identification program used to activate the machines for each voter and ensure their vote remains secret and secure. In addition to the digital touch screen recognition, voters also receive a paper receipt, leaving both a digital and paper trail that can be easily traced and audited. Dâ€™Amelio says the real strength of the electoral system is the capacity to audit every step of the electoral process in conjuncture with representatives of the opposition.

VOICEOVER: The Carter Center, founded by former U.S. president Jimmy Carter in 1982, is a non-profit human rights organization with a self-described emphasis on â€œseeking to prevent and resolve conflicts, enhance freedom and democracy, and improve healthâ€ around the world. Founder and former President Jimmy Carter recently stated â€œAs a matter of fact, of the 92 elections that we’ve monitored, I would say the election process in Venezuela is the best in the world.â€ Hector Vanolli, director of the Carter Center in Venezuela, says that the automization (is this a word?) of every step of the process, from pre-election voter registration, to election day voting, to post ballot tallying, along with its auditability, is what sets the Venezuelan electoral system apart from other countries.

HECTOR VANOLLI, DIRECTOR, CARTER CENTER OFFICE IN VENEZUELA: The Venezuelan electoral system is one of the most advanced automated systems not only in the hemisphere, but in the world, the difference between their system and those of other countries is that it is fully automatedâ€¦the technical characteristics of the Venezuelan electoral system and its auditability, in all of the electoral processes that the Carter Center has observed in the past several years in Venezuela, we have not encountered any cases indicating the manipulation of votes that could have altered the outcome of the election.

VOICEOVER: Opposition member Vicente Bello is a Democratic Unity Roundtable, or MUD, coalition representative to the National Electoral Council. He says that while the voting technology is advanced and ensures transparency, that it is only one aspect of the overall electoral process, and that the CNE has turned a blind eye to other practices that have contributed to a skewed and undemocratic election process.

VICENTE BELLO, OPPOSITION REPRESENTATIVE TO THE CNE: We say that the vote is secret and secure and that they have complied in safeguarding these processes, from this point of view the electoral platform is satisfactory and it functions well and functions quickly, the problem is with the CNE administration and leadershipâ€¦for example, with the use of state resources and the completely unbalanced official propaganda, there are abuses in the open use of state resources for the electoral campaignâ€¦these are 5 television channels, around 130 radio stations, a variety of national and regional newspapers, all dedicated to the campaign as if they are part of the propaganda team of the PSUV party and the campaign of candidate Chavez, the CNE has tolerated this and this is unbalanced and would be unacceptable in any other country.

VOICEOVER: The opposition also accuses the government of using various pieces of legislation and technical rulings to hamper coverage critical of the government. Chavez supporters point to the fact that the overwhelming majority of Venezuelan media is privately owned and openly anti-Chavez, with state media controlling just over 5 percent of total television audience share in 2010, significantly lower than countries like France and Great Britain. They also have not forgotten the role of much of the private media in supporting and participating in the 2002 coup. In the media there have arisen accusations that the opposition has been preparing a campaign to not recognize the results of the October 7th elections in the event of a loss. Both sides of political divide have accused the other of participating in pre-elections destabilization efforts with the accusations.

VOICEOVER: The National Electoral Council has been engaged in a public education campaign in areas across the country in order to familiarize some of the more than 18.9 million registered voters with the Venezuelan voting system. On election day there will be 329,000 people working at the 13,810 voting centers across the country, including 3,435 national observers as well as 245 international accompaniers monitoring elections.