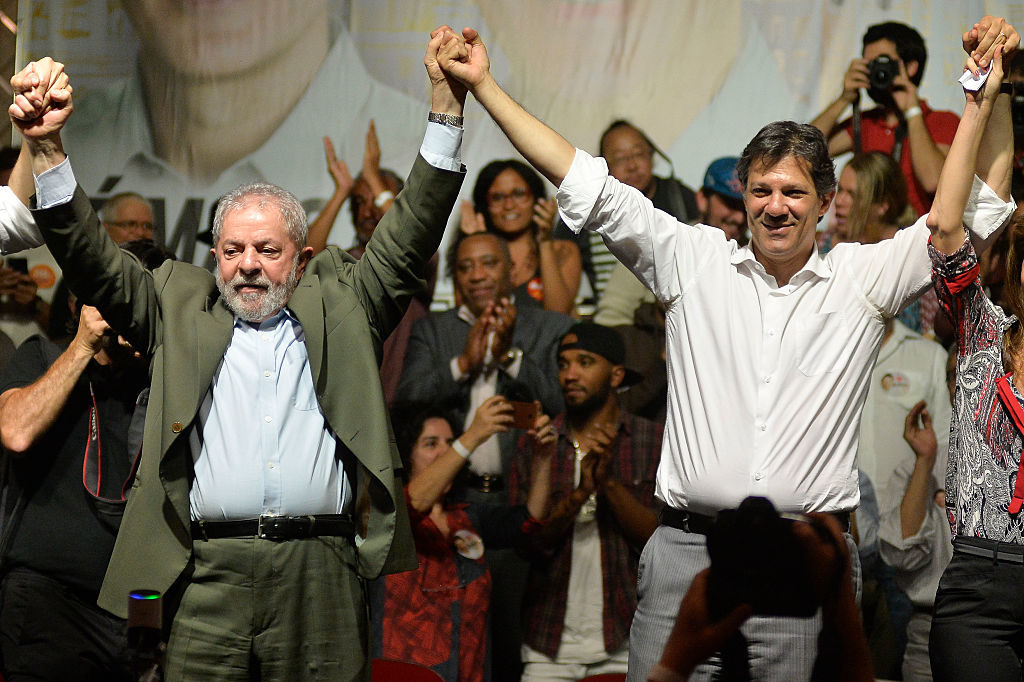 MIKE FOX: He is not former President Luiz Inacio Lula da Silva, but he is still the hope for the left in Brazil.

Fernando Haddad is now the presidential candidate for the Workers Party.

55-year-old Haddad is an economist and former political science professor, who served seven years as the Minister of Education in the Workers Party governments under Lula and Dilma Rousseff. Most recently, he was the mayor of Sao Paulo, Brazil’s largest city. There, he pushed recycling measures, and implemented an extensive plan to revamp the cities bottlenecked transportation, building hundreds of miles of bus and bike lanes. The measures won praise from supporters and even The Wall Street Journal, which called him an “urban visionary”. But they also scored him enemies.

Haddad has promised to undo the damage of the last two years, under president Michel Temer, in which the government has unleashed a wave of austerity and budget cuts. He say he will roll back Temer’s reforms, increase rights for social movements and typically marginalized communities, push to democratize media and increase broadband internet coverage across the country. The Workers Party plan promises to prioritize education and sustainable development, embrace regional integration and again transform Brazil into a global player on the international scene.

In short, Haddad would return the county to the progressive program that was so popular under the Workers Party governments, with a facelift for 2018.

For the beginning weeks of the presidential campaign, Haddad was on the road across the country, as Lula’s spokesperson and running mate.

FERNANDO HADDAD: Workers are frustrated with the current situation but they can be hopeful about about the election on October 7. I’m sure that Brazil will take the right step and rescue a project that was right for 12 years under the Workers Party governments.

MIKE FOX: Lula has been the front runner in the elections, but he’s also been in jail since April on a corruption conviction, which he and his supporters say is just a ploy to stop him from returning to the presidency.

In late August, the country’s top electoral court effectively barred Lula from running in the election. Under Brazilian law, candidates who have been convicted of corruption and other charges cannot run for office for eight years.

Lula appealed the ruling, but his efforts were stymied.

Lula leaves big shoes to fill. The question is will Lula’s supporters will back a Haddad candidacy. Haddad is not well known in Northeastern Brazil, where Lula has his most substantial base. But there are signs Lula supporters may jump on board.

In one of the first polls released after the announcement that Lula would be barred from the election, Haddad spiked into 2nd place, behind the far-right candidate Jair Bolsonaro, who himself was stabbed during a campaign rally on September 6, and is now recovering in the hospital.

Haddad’s running mate is Manuela D’ávila. A vibrant young politician with the Brazilian Communist party. She’s a former student leader, who was first elected to Congress more than a decade ago, while in her mid-twenties.

Lula praised her on stage in Sao Bernardo do Campo, during his last speech before turning himself in to be brought to jail in April.

Having her on the ticket with Haddad marks a major shift for the Workers Party. Lula and Rousseff each ran with much more conservative vice presidential candidates, due to their coalitions with centrist and even right-wing parties. President Temer was Rousseff’s vice president, until she was impeached by congress in 2016, in a move that many called a legislative coup.

The next few weeks will define the future of Brazil for the coming years. The Left is hoping the country can turn back to the pink tide of the early 2000s and not slide into the nationalist populist wave that is washing across so much of the globe.