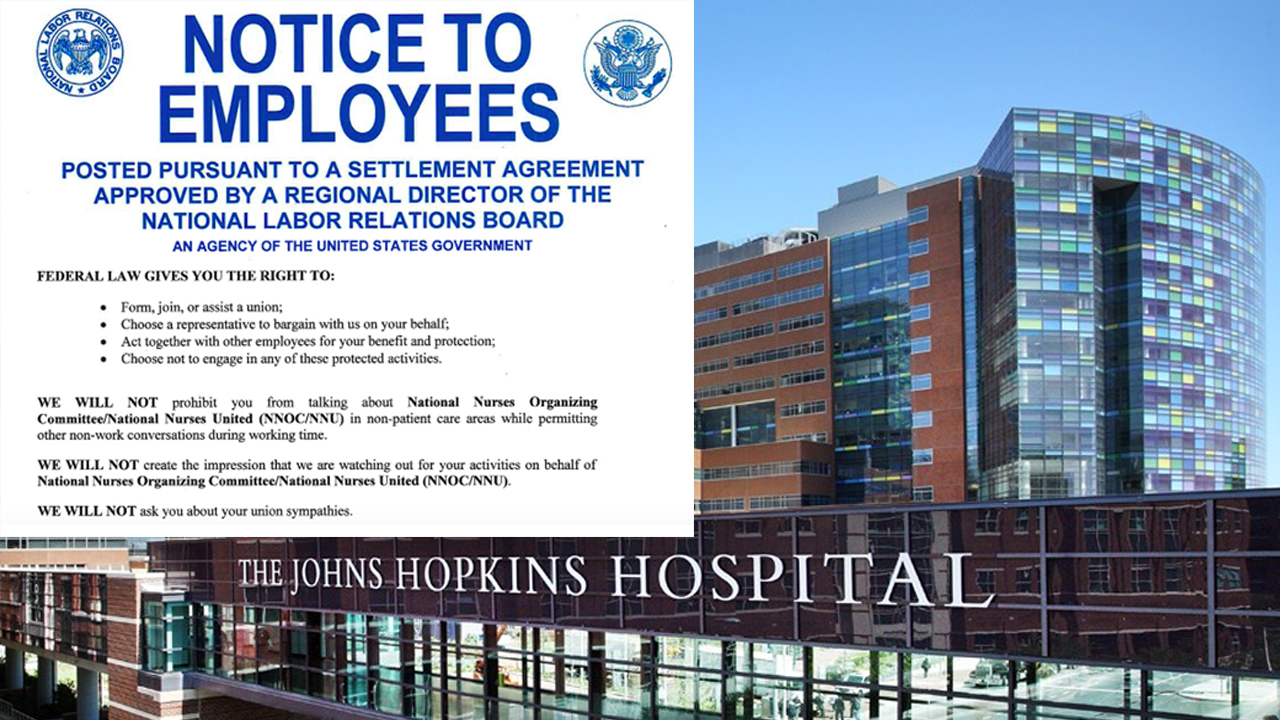 A battle over nurses’ right to organize at the prestigious Johns Hopkins Hospital in Baltimore reached an inflection point last week when the sprawling institution agreed their workers have a right to freely discuss joining a union at their workplace.

A settlement between nurses and the hospital system obtained by The Real News mandates that the hospital post signs in break rooms by June 14 for 60 days to inform workers they have the right to “Form, join or assist a union.” The signs also state Hopkins will not attempt to intimidate employees who participate in organizing efforts. The message must also be emailed to employees.

This notice, affirming the right of nurses to unionize, will be posted throughout Johns Hopkins Hospital, pursuant to an agreement with @NationalNurses that was reached through the @NLRB. More coming later today. pic.twitter.com/OjYZtkbKF5

The agreement is the result of an unfair labor practice complaint filed against the hospital last October by National Nurses United (NNU), the union with which Hopkins nurses were organizing. NNU has maintained Hopkins carried out a year-long anti-union campaign. NNU says the agreement reached through the National Labor Relations Board (NLRB) shows that Hopkins violated federal labor law by interrogating nurses about union activity, barring off-duty nurses from break rooms, and prohibiting nurses from discussing their union efforts at work.

“The NLRB actually found that there were merit to the charges,” says Richard Jones, a registered nurse who has worked at Hopkins for the past 21 years and been active in the union campaign. “The reason we’re organizing is to be able to improve patient care and also improve patient nurse to patient ratios, as well as organizing for fair compensation and benefits.”

Bill Barry, a former labor organizer and retired director of Labor Studies at CCBC-Dundalk, said the settlement allowed the union to avoid litigation, which could have taken years to resolve. “This was the best case [scenario], a trial would have resulted in the same exact thing.”

According to agreement, Hopkins “does not admit that it violated NLRB Act, nor does it constitute a determination by the NLRB that Hopkins violated the Act.”

“Contrary to the NNU’s misrepresentations about what the NLRB found, the settlement agreement specifies that the NLRB made no determination that the Johns Hopkins Hospital violated federal labor law,” said Kim Hoppe, senior director of public relations and corporate communications at Johns Hopkins Medicine, in an email. “The settlement also does not affect the hospital’s right to maintain its established policies regarding access to unit breakrooms,” she said.

“They settled on terms that required the employer to reaffirm directly and explicitly to employees that they had rights under federal law and the employer was committed to respecting those rights,” said John Durkalski, a partner at Butsavage & Durkalski, P.C., a union-side law firm in Washington, D.C, who reviewed the settlement on behalf of The Real News. “That’s the bottom line, and I think it’s a red herring to dwell on whether or not the employer admitted fault or liability.”

Two Hopkins nurses who spoke to The Real News under the condition of anonymity expressed  disappointment with the settlement. “This whole process has been INFURIATING [emphasis theirs] and Hopkins does NOT respect or protect nurses right to support unionization,” one nurse said, calling an internal email to employees responding to the agreement “typical Hopkins gaslighting.” The email, obtained by The Real News, reads in part: “The settlement is not an admission that the hospital has in any way acted improperly.”

“They definitely violated the law, there is no question,” said another nurse, speaking on the condition of anonymity. The settlement “feels anticlimactic even if it’s a ‘win,’ since all the hospital has to do is post signs.” They also questioned whether nurses would see the signs or read the email notice.

Despite this, Jones is confident the nurses will persevere. “The end goal, of course, is actually to actually win an election. And we’ve been gaining support even despite all of the millions of dollars being poured into busting against our right to collectively bargain.”

The nurses did face a setback in March when a charge against the hospital on behalf of former Hopkins nurse Vivian Obijekwu was dismissed by the NLRB. NNU had fundraised for Obijekwu, who said she was terminated while pregnant for taking part in efforts to unionize the hospital. In her case, she could have received back pay because of her lost wages, but not in the case of suppressing union organizing. “One of the weaknesses of U.S. labor law is that there is no financial penalty on Hopkins for the anti-union activity reflected in the settlement,” Barry said. “Unfortunately, [there’s] no liability, no deterrent.”

Johns Hopkins has a long history of opposing union campaigns. In his book Ghost of Johns Hopkins, author and former veteran Sun journalist Antero Pietela covers the campaign to unionize janitors and low-wage workers at the hospital in the 1960s, in a campaign backed the Southern Christian Leadership Conference which was co-founded by Dr. Martin Luther King, Jr.  “Hopkins has always been quite hostile toward unions, arguing that it is in a business where union meddling should not be tolerated,” Pietela said in a recent interview with The Real News. The campaign was ultimately successful in 1969, after “a very tortuous, long and very controversial chapter in Hopkins’s history” he said.

For full disclosure, National Nurses United has previously donated to The Real News Network, most recently in 2016.