Hopkins nurse Kate Phillips says the hospital has prevented nurses from discussing the benefits of a union, and that the hospital faces a high attrition rate and low staff to patient ratios

Hopkins nurse Kate Phillips says the hospital has prevented nurses from discussing the benefits of a union, and that the hospital faces a high attrition rate and low staff to patient ratios 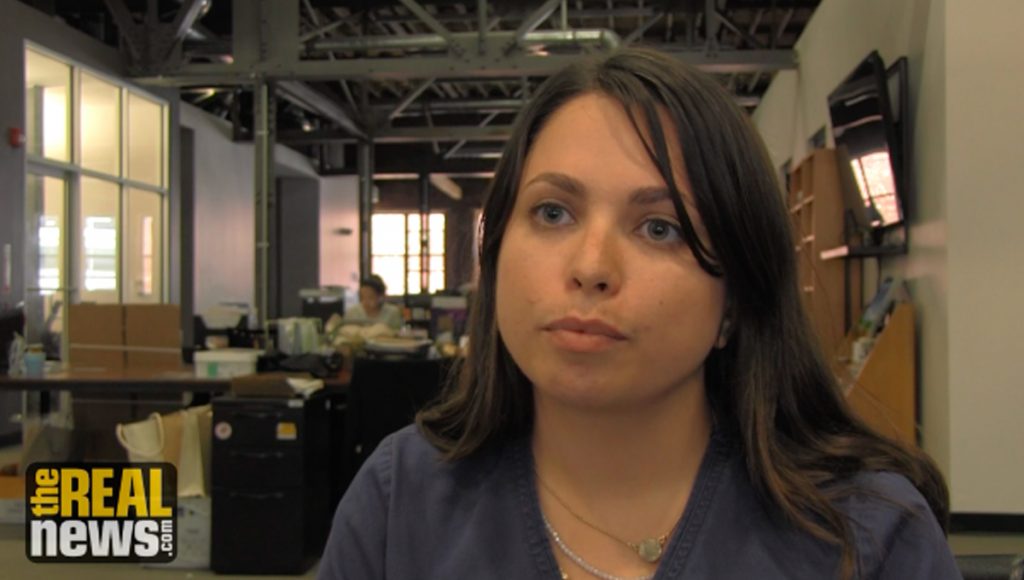 JAISAL NOOR: A campaign to unionize nurses at one of the country’s top hospitals is heating up. National Nurses United announced Monday they filed an unfair labor practice charge with the National Labor Relations Board against Baltimore’s Johns Hopkins Hospital for allegedly preventing nurses from talking about the benefits of joining a union.

KATE PHILLIPS: Right now the administration is making it increasingly impossible for the nurses to talk to each other. When we can’t talk to each other we can’t strategize for how we can improve patient care through a collective voice.

JAISAL NOOR: This comes at a tumultuous time for NNU. This week, NNU’s pick for governor, Ben Jealous, won the Democratic primary. Then, just hours later, the Supreme Court issued unions a huge blow, ruling in the Janus decision that public sector union members can opt out of paying dues. Hopkins is privately run, so this won’t affect them. Hopkins recently hired Littler Mendelson, one of the nation’s top union-busting firms, with ties to the Trump administration. Last year one of their attorneys was appointed to the National Labor Relations Board. And at Hopkins, pro-union nurses allege that while they were prevented from even speaking to their counterparts in other units, the hospital is giving hired consultants, quote, free rein to promote anti-union propaganda.

KATE PHILLIPS: Roaming the hospital with free access to break rooms, and access to nurses. And many times actually pulling nurses from patient care. Many of our nurses have asked them very basic questions about labor law that they’ve been unable to answer. And when we do ask them anything beyond the basics, it becomes very apparent that their goal is to spread myths to make it more challenging for nurses to learn what organizing a union looks like.

JAISAL NOOR: To learn more, I sat down with Kate Phillips, a registered nurse in the hospital’s medical intensive care unit, for an exclusive interview.

And we understand some of the other grievances are a low staff to patient ratio, and the high rate of attrition for nurses, the high turnover rate. Talk a little bit about that, why that’s a concern, of concern to you.

KATE PHILLIPS: So, I am a nurse, I’ve been a nurse at Hopkins for two and a half years. Some of the nurses that I work with, although fewer than in years past, have decades of experience. And when we are-. Nurses who have less experience, when we are at the bedside, we rely on the expertise of extremely experienced nurses to keep patients safe and provide the best care possible. For example, in their career they will have seen rare cases or know the answers to rare questions that we wouldn’t know the answer to.

Without that expertise at the bedside, patients are at risk. But right now, Hopkins is not prioritizing obvious ways to keep and retain good quality nurses and that puts patients at risk, and that’s one of the biggest reasons that we’re organizing, to keep nurses at the bedside.

JAISAL NOOR: In an e-mail, Hopkins spokesperson Kim Hopp wrote: The hospital deeply respects our nurses, their contributions to our organization, and all of their rights as employees, including the right to support or oppose a union. She added: We are committed to maintaining our longstanding culture of collaboration and open communication with them and with all employees in order to provide the highest quality of care.

KATE PHILLIPS: I would say that if they really want us to be able to provide the best possible quality of care and they want us to be able to communicate openly, that they would give us our legally, federally protected right to organize ourselves and speak to each other without their interference, and that that ultimately will be the best way for us to provide world-class care.

JAISAL NOOR: So along with the nurses like yourself that are organizing to join the union, we know there’s some nurses that vocally oppose the union. And some of them are part of Facebook groups, and they have a website. And you know, they say that a union will actually hurt patient care. It’ll hurt the ability of nurses to advocate for their patients. And they say that in other hospitals with, where the nurses are unionized, they have negative, there’s other negative impacts to that. What’s your response to that, to those kind of claims made by the anti-union side?

KATE PHILLIPS: I think that every nurse deserves access to information so that they can make an educated choice. Once they have been able to see what patient care looks like in a unionized facility versus not, the vast majority of nurses come to the obvious conclusion that unionized nurses mean safer patients.

KATE PHILLIPS: Yes. Unfortunately, we are underpaid. And although that in and of itself is wrong, the main reason that it’s bad for the hospital, so it’s bad for the hospital, is because it makes it harder for us to attract and retain the best nurses, who can therefore then provide the best care for patients. When we undercut nursing we show that we don’t value the care that nurses provide. And I think if you talk to any patient who’s spent any time in the hospital, they’ll say that the person that they interact with the most and the person that is their voice is the nurse at the bedside. And if we can’t do what it takes to retain and recruit the best nurses, then we’re really doing, lending a disservice to the patients.