In part two, Antero Pietila, author of “The Ghosts Of Johns Hopkins,” discusses recent protests by students, community members and Hopkins employees over the institution's relationship with Baltimore

In part two, Antero Pietila, author of “The Ghosts Of Johns Hopkins,” discusses recent protests by students, community members and Hopkins employees over the institution's relationship with Baltimore

The Ghosts Of Johns Hopkins 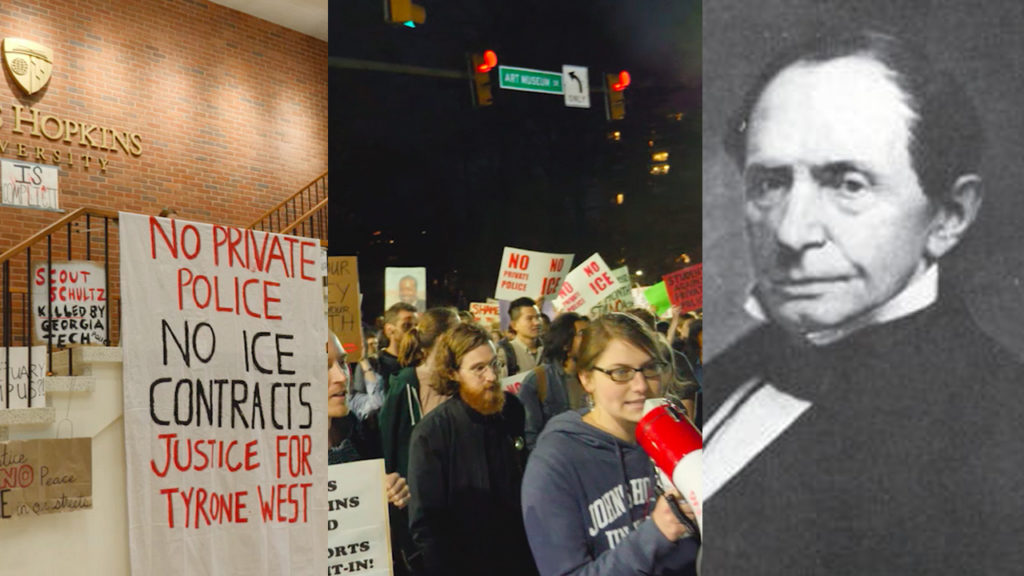 JAISAL NOOR Welcome back to The Real News. I’m Jaisal Noor. This is our second part of our conversation with Antero Pietila about his book, The Ghosts of Johns Hopkins: The Life and Legacy that Shaped an American City. Thanks so much for joining us again.

JAISAL NOOR So in part one, we talked about some of the history of Hopkins and the relationship to the people of Baltimore, and this history is continuing to be written. Just last week, seven people were arrested taking part in a month-long sit in at Hopkins, but I want to start with the news of this new report by National Nurses United, which is aiming to unionize nurses at Hopkins Hospital. They released a scathing report that found that since 2009, Hopkins has filed more than 2,400 lawsuits seeking payment of medical debt. The report found Hopkins disproportionately sued residents of low-income, black neighborhoods in Baltimore and argued that because Hopkins is a nonprofit that receives tens of millions annually in tax breaks, something like $164 million alone in tax exemptions in 2017, it should provide care to those who can’t afford it. We contacted Johns Hopkins for a response, and this is what they sent us. They said, “Our mission is to improve the health of our community and everything we do is to advance that goal. Our first priority is providing care. Those who have the ability to pay for their health services, should do so. For those who cannot pay, we consider it our mission to make sure they receive the care they need.” So again, Hopkins is back in the spotlight for its treatment of its black neighbors.

ANTERO PIETILA This is part of a continuing saga. Hopkins, when the hospital was created, it was the only hospital in a segregated city that treated blacks as long as they were indigents. And so, in today’s situation, we talk about a city where disparities are very pronounced so that there is talk about a White L and a Black Butterfly, or neighborhoods that are totally disparate. The prestigious neighborhoods are in the White L. The poor neighborhoods, and crime and poverty, they are in the Black Butterfly. What Hopkins’s website says is that on an annual basis, they provide $32 million-worth of services free to indigents but again, their criteria are very strict. It’s also interesting that they talk about how many of the people that they go after in trying to collect this money, they may have the resources to pay, but they choose not to pay. They are just—And what we have to remember is that the whole hospital scene, it has changed quite a bit from Johns Hopkins’s days. In those days, hospitals were last resort care facilities for people who knew that they were dying. Today, Hopkins is a citadel of hope where miracles happen on a daily basis. And so, much of this then is, Hopkins has to fund its operations, and this is one of the reasons that it goes after people who do not pay.

JAISAL NOOR Yeah, and the report notes that the subsidies it gets from taxpayers far outweigh how much it has to collect from its low-income residents. I also wanted to ask you about the recent protests at Johns Hopkins against the recently-authorized private police force. Seven people were arrested last week, as Hopkins called in Baltimore police to end a more than month-long sit in. Protesters had chained themselves to the campus administration building, Garland Hall. They said they wouldn’t leave until Hopkins abandoned its recently-authorized private police force and its contracts with Immigration and Customs Enforcement. And, you know, the protests got the backing of faculty groups, of student groups—

CHISOM OKEREKE I have constantly seen my peers, my friends, myself, being targeted by the already present law enforcement entities on this campus and it’s very terrifying for us to think that, you know, these minor inconveniences of being assumed to be no good people around this campus. It’s scary to think that could be weaponized and be turned into a matter of life and death.

DREW DANIEL And I was present at the Homewood faculty assembly where we voted unanimously to express our dismay at a private police force on the Hopkins campus. We are entirely opposed to this idea. We also express solidarity with the students organizing the sit in and specifically, are asking that the University not penalize any students who are participating in the sit in.

JAISAL NOOR Hopkins said they had to move in because the conditions weren’t safe in Garland Hall. What were your thoughts, you know, just having completed this book just a few months ago, just being out, The Ghosts of Johns Hopkins, your thought on these continuing protests today? They’re talking about the same issues, policing, crime, fairness—

ANTERO PIETILA Unionization and all this is history repeating itself. The occupation of the administrative building was a repeat of something that happened in 1969 when students occupied the building to protest Hopkins’s participation in ROTC, the Reserve Officer Training Corps. This was at the height of the Vietnam War and Hopkins was a quite passive campus or had been up to that time. And then, this energized, and this was seen as a mobilization tool. Similarly, there is lots of controversy today about unionization. Now, the unionization campaign has been going on at Hopkins for lots of years. Hopkins has always been quite hostile toward unions, arguing that it is in a business where union meddling should not be tolerated. In the beginning, when the old CIO was trying to create a union at Hopkins, there was actually a law that prohibited unions from being present at charity hospitals like Hopkins.

ANTERO PIETILA Right. This was at the time when unionization was starting at various hospitals and what had happened was that a couple of months before the Johns Hopkins unionization campaign began, the Southern Christian Leadership Conference in partnership with a New York-based union had successfully unionized a hospital in South Carolina. And so, now they came to Baltimore, promising to do the same at Hopkins, and that ultimately happened, but it was a very tortuous, long and very controversial chapter in Hopkins’s history.

JAISAL NOOR One of the things that the opponents of the Hopkins police force say is they note that Hopkins officials gave $16,000 on a single day to the campaign of former Mayor Catherine Pugh, just one month before she introduced the bill for the Hopkins private police force. They say this was—They call it corruption even though it was legal, but they say it was corruption because they helped, sort of, influence her decision. Do you see any historical parallels with that? You know, it’s said Hopkins always gets its way, it’s always going to find a way to get what it wants.

ANTERO PIETILA Well, Hopkins is the largest private sector employer in the city— not only in the city, but also in the state of Maryland. So, it does have lots of clout and so, should I be shocked that politics is tied to campaign contributions, whether legal or illegal? I’m not shocked at all. I mean, this is how the business is done and the only thing that is interesting is that we have these revelations and we at least know that this happened.

JAISAL NOOR And the whole issue of safety. That’s what Hopkins says it’s pursuing with this private police force. You’ve touched upon in your book how the government created slums, the government created concentrated poverty. If we’re going to remedy, if we’re going to have—You know, so a lot of people say the Hopkins police force it’s not going to solve poverty. How can we actually solve the root causes? How do we address it? Do you think policing will address it, or do you think there needs to be other—

ANTERO PIETILA No, policing is not going to address it. Baltimore is a very bigoted city and has a history of bigotry that continues to today. Not only is the city very segregated, but it was one of the 239 American cities that was redlined, affecting investment in various parts of the city. Today, we have subprime mortgage loans and many other expressions of discrimination, but one of the key reasons for poverty in Baltimore, I am absolutely confident, is the redlining that is going on in terms of public transportation. Not only is the city short of low-level jobs, but it also has a population that largely is ill-prepared to hold a job. Many of the applicants, they have a criminal record. And then, you have this awful system of mass transportation that makes it almost impossible to reach potential employment sites. It’s interesting that when Amazon located fulfillment facilities, big warehouses and fulfillment facilities in Baltimore, one of the first things it did, it created a transportation system of its own just to get the workers to its facilities. The same about Hopkins. Hopkins has a transportation company that shuttles people within the various locations that the university and the medical institutions have around the city.

JAISAL NOOR Critics say that Governor Larry Hogan redlined the red line because that would have been a mass transit rail that would have connected East and West Baltimore to the counties. That was one of his first acts in office, was to block that and—

ANTERO PIETILA There is no political penalty in doing that. We have a barebones metro system— one line in Baltimore. We have a light rail system and it is interesting that in the light rail system, one of the wealthiest neighborhoods in the area, Ruxton, opted out of having a stop in their community. And now, there is an active campaign going on in Anne Arundel County, a county south of Baltimore, to get rid of existing light rail stops because it’s seen that they are bringing “outsiders” who don’t belong to the neighborhood. The fear is that this is increasing crime. Now, there is no real evidence that this is so, but this is what voters believe.

JAISAL NOOR And those are similar arguments made over 100 years ago when Baltimore passed the first racial segregation law in the country.

JAISAL NOOR And thank you for joining us at The Real News Network.

Antero Pietila spent thirty-five years with the Baltimore Sun, most of it covering the city’s neighborhoods, politics, and government. A native of Finland, he became a student of racial change during his first visit to the United States in 1964. His book, Not in My Neighborhood, is a history of residential real estate practices in…