Happy summer! Water bills just went up by another 10% in Baltimore.

The average household in Baltimore will now spend roughly $1200 a year on water, an increase of about $8 per month. This is the first of three annual rate hikes of roughly 10% per year approved by the Board of Estimates in January. The city says they must increase bills to pay to fix aging water and sewage infrastructure. Under federal consent decree from the Environmental Protection Agency, Baltimore must spend $1.6 billion on these repairs.

The increase, enacted on July 1, came days after the city’s first Code Red Extreme Heat Day of the year on Saturday, June 29, when the heat index reached 100 degrees. In a press release announcing the heat advisory, the Baltimore City Health Department advised residents to “drink plenty of water.” The heat index—the temperature compounded with humidity—may top 110 degrees by July 4.

Even before this rate hike, the price of water in Baltimore doubled since 2012. A study released earlier this month from the NAACP’s Legal Defense Fund shows that the city’s water affordability crisis is disproportionately impacting Black Baltimoreans. With this rate hike, bills will exceed 2% of median income (the U.S. Environmental Protection Agency’s affordability standard) for Black households in 118 of 200 census tracts. By next year, that will increase to 131 of 200 census tracts.

Officials won’t delay the rate hike even though residents have not received water bills for two months due to a ransomware attack on the city that locked all public workers out of their computers. The city will waive late fees, but will distribute bills that reflect the increase whenever they are able to use their computer system again. The Department of Public Works (DPW) said customers can pay an estimate based on their previous bills, or set aside money to pay past bills once they’re sent out.

Environmental and affordability advocates with the Baltimore Right to Water Coalition held a press conference outside City Hall on Monday. They rallied under a sign that read, “WATER JUSTICE NOW.” One protestor held a large cardboard cutout of a silver faucet pouring dollar signs. 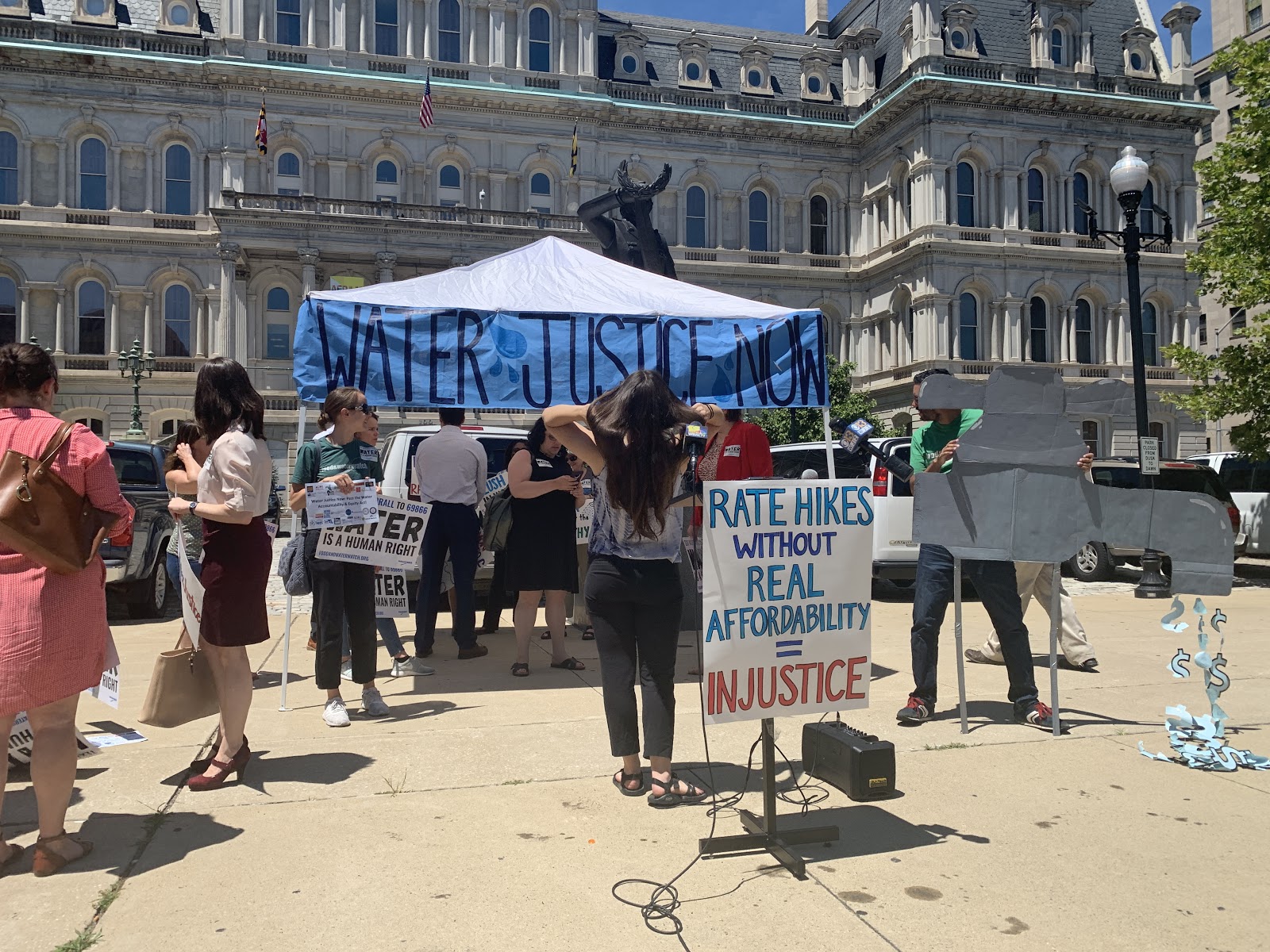 “Rate hikes without a real, comprehensive affordability program in place is nothing short of injustice,” said Rianna Eckel, an organizer with Food and Water Watch, at the podium. “Water cannot be accessible just for the wealthy.”

By the United Nations’ metrics, to be affordable, water bills should not exceed 3% of a household’s income.

“With the rate increase, more than 40% of families in our city will be billed more than this amount,” said Eckel. “While we recognize the need for improvements to this aging system, the Department of Public Works has failed to propose a meaningful comprehensive water affordability program to ensure that low-income families still have access to water.”

To counter these increasing bills, the coalition is advocating for the passage of the Water Accountability and Equity Act, which was proposed by then-City Council President and now-Mayor Jack Young in December. It is currently in City Council’s Taxation, Finance and Economic Development Committee and is scheduled for a working meeting later this month, after which it will go to a hearing in the full council.

The legislation would cap residents’ water bills based on their household income level. Households making 50% of the federal poverty limit would pay a maximum of 1% of their income, and households that make 100 to 200% of the federal poverty level would have their bills capped at 3% of their income. It would also create the Office of the Customer Advocate, an independent office to hear grievances and appeals.

DPW did instate a different water affordability program, Baltimore H2O Assists. It is expected to lower an average bill for a household of three from about $98 per to about $61 per month.

DPW said they would begin accepting applications for the program on Monday, July 1. But at the press conference on Monday, Ellyn Riedl, a staff attorney with Maryland Volunteer Lawyers Service, said DPW had no applications available that day.

Riedl was attempting to help a client, a 91-year-old homeowner who is homebound and lives on Social Security alone, sign up for the program. On Monday morning, she went to DPW’s office in the Abel Wolman Building on Holliday Street, but the receptionist did not have any application forms. Instead, she was asked to leave her contact information on a sign up sheet, and was told that someone would follow up with her.

“I wasn’t given a time table for that, so I don’t know how long it’s going to take them to call me,” said Riedl.

She also wasn’t told what paperwork her client would need for the application.

“Are they going to need a tax return? Do they need pay stubs? I don’t know,” she said “So even when they follow up with me it’s still going to take longer to go through the application process because I may need to get that information that I don’t already have.”

“There apparently was a brief time this morning when one of the staff members at the desk accidentally left the application document out of the materials (which included the FAQ) that we’re handing out to customers,” he said in an email.

He said the mistake has now been corrected.

Riedl says Young’s Water Accountability and Equity Act would make information about affordability application processes more clear and accessible. “It would need to be in writing, it would need to be advertised,” she said.

Unlike DPW’s H2O Assists program—or any water affordability programs in Baltimore—the proposed measure would also apply to renters, who make up more than half of the city (unless they get their landlords to put water bills in their name, which “can benefit the landlord because it could make the property more affordable without costing the landlord anything,” said DPW’s Raymond).

“The people are the most low-income in this city are also largely renters, so the idea that those people are shut out from getting any assistance at all is really baffling,” said Molly Amster, Director of Jews United for Justice’s Baltimore branch.

Studies show that Baltimore is getting hotter. As the climate crisis pushes on, summers will bring even more oppressive heat and humidity.

In other words, Baltimore temperatures will climb no matter what.

“As summers get hotter, we need to make sure no one is at risk because of the lack of access to water,” said Eckel.