Just days after the city proposed another rate increase, Baltimore's Council President unveiled legislation that promises water bill affordability and accountability. The proposal will be taken up by the Council’s Taxation, Finance and Economic Development Committee in the coming weeks

Just days after the city proposed another rate increase, Baltimore's Council President unveiled legislation that promises water bill affordability and accountability. The proposal will be taken up by the Council’s Taxation, Finance and Economic Development Committee in the coming weeks 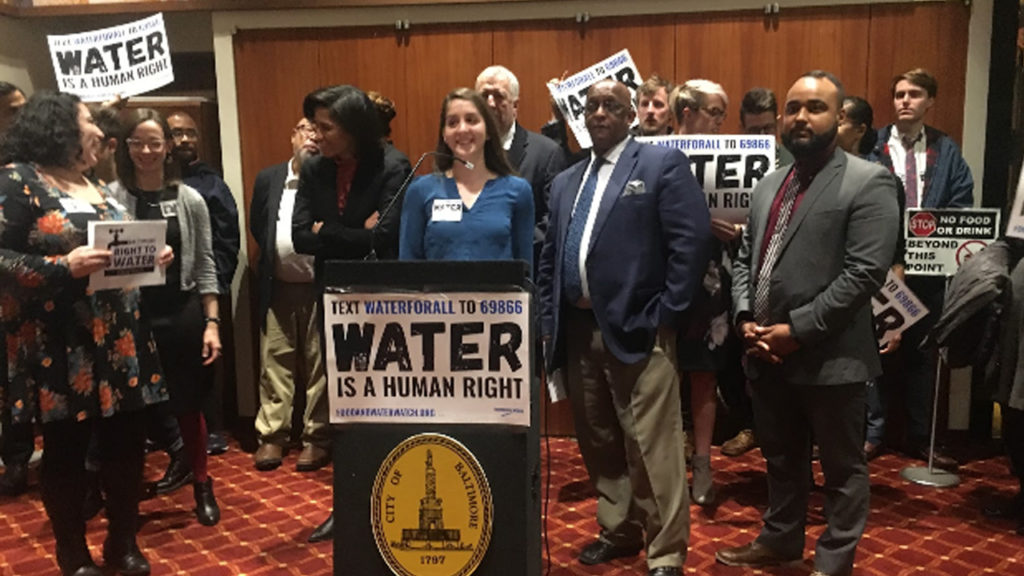 Editor’s note: Council President Young’s proposal will be taken up by the Council’s Taxation, Finance and Economic Development Committee in the coming weeks. The Real News will issue an update when the next hearing for the bill is scheduled.

Council President Jack Young has just introduced income-based water billing for the city of Baltimore, in a city where advocates and councilmembers say that the water affordability crisis is out of control.

Water bills have tripled over the last decade in Baltimore. Just before Monday’s council meeting, advocates gathered to support legislation they say will promote equity in the face of rate hikes.

RIANNA ECKEL: The Water Accountability and Equity Act is the comprehensive, forward-thinking legislation that we need to ensure that everyone in our city has access to water.

DHARNA NOOR: The Water Accountability and Equity Act was sponsored by City Council President Jack Young, and cosponsored by every member of the Council. If passed, it will establish a water affordability program based on customers’ level of income. It would also create an office to hear grievances and appeals from customers.

RIANNA ECKEL: It will reform the way our water billing system works, and ensure that more revenue is collected for the Department of Public Works to carry out their critical job of maintaining our infrastructure, while still protecting our customers.

DHARNA NOOR: The legislation caps customers’ water bills based on their income level. It uses a formula that takes into account both household water use and household income relative to the federal poverty threshold.

MARY PAT CLARKE: Basically, they would get reductions in the, in the monthly fee they pay, based on their income so that they would be able to reduce the share of monthly income that water now overtakes.

ZAFAR SHAH: Basically, tenants just need to show up, provide a copy of their lease, provide their financial information, in order to get a credit which would then be disbursed to them either once a month or at the end of the year.

DHARNA NOOR: Food and Water Watch and members of the Right to Water Coalition have been pushing the Council to introduce this legislation for years. Last December, President Young told The Real News it would be introduced in January 2018.

JACK YOUNG: The bill should be coming out in January at our next Council meeting.

DHARNA NOOR: But the advocates say in the past year they’ve created a more robust piece of legislation.

MARY GRANT: I think the delay occurred because there were some conversations that DPW tried to work with on and move them along, and try to work out a compromise. I think that now is the right time to have it done, because DPW just announced another 30 percent rate increase. So now is the moment we really need to be proactive in making sure our water service is affordable and accountable, and that people have really due process under the law to dispute bills.

MARY GRANT: DPW has proposed a discount program. It’s just more of the same. They’re expanding their existing senior discount to all low-income customers. It’s not a bad thing, it’s just not enough. We really need to make water service affordable for each household. So we need to look at each household and adjust bills down to a level that each household can afford to pay based on their income. And their current dispute process, it doesn’t really allow people to have a thorough follow up. It’s not consistent. It’s not consistently applied. There are no real timelines for people to get their disputes resolved.

ZAFAR SHAH: The, sort of, senior discount program, those are discretionary. They’re not legal, they’re not set in stone. And they don’t provide a tenant with the rights–if someone is in a discount program, it still doesn’t stop a landlord from evicting them based on unpaid water bills.

DHARNA NOOR: DPW says rate hikes are necessary to raise funds for infrastructure repairs. Baltimore is required under federal consent decree to repair its 100-year-old water and sewage system. But Young and supporters say that creating a new system where residents can actually afford to pay their water bills could actually drive a revenue increase.

JACK YOUNG: While this proposal makes sense on a basic human level, it also makes sense from a financial standpoint. The common misconception is that poor people don’t want to pay their bills. This is terrible slander and totally false. People pay bills that they can afford. I say to the middle class homeowner, let me quadruple your mortgage by raising the interest rate by double digit points year after year, and we’ll see if that doesn’t cause you to miss a few payments.

DHARNA NOOR: We reached out to DPW for response, and they said: “We look forward to working with President Young and the councilmembers. Our Baltimore H2O Assist program is fiscally and socially responsible, offering meaningful discounts to those in need.”

In November, Baltimore became the first major city in America to ban water privatization, and the advocates say this new bill is the next step to ensure water affordability.

MARY GRANT: We know privatization would only exacerbate the affordability crisis that’s so widely felt in our community. Private companies, they’re not charities. They’re not going to offer us large sums of money for free. They’ll want to make a profit on that. In Baltimore we just can’t afford it. And so banning water privatization was the right move. And the Council President is acting on that, and he’s taking up the mantle that we gave to him to really lead our community and make sure that we have safe and affordable water that is accessible across our community.

DHARNA NOOR: The bill is expected to pass through City Council, and then head to the Mayor’s office for final approval.

DHARNA NOOR: For The Real News, Dharna Noor in Baltimore.