The NAACP Legal Defense Fund shows an “explicit link between race and water affordability." To fight this, they propose litigation and new legislation.

The NAACP Legal Defense Fund shows an “explicit link between race and water affordability." To fight this, they propose litigation and new legislation. 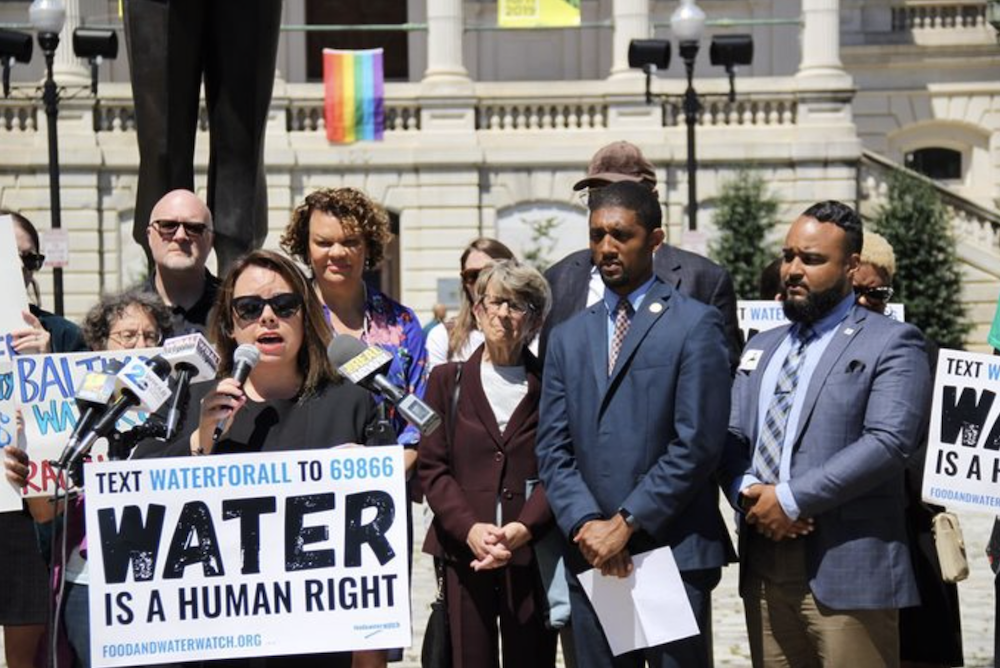 COTY MONTAG: The rising cost of water in Baltimore disproportionately affects black folks, according to a new study. The NAACP’s Legal Defense Fund released a report this week which concludes that there is quote an explicit link between race and water affordability in this city.

Currently this year, 65 percent of the black population in Baltimore is affected by this affordability crisis. So more than half. It’s a really widespread, wide-ranging problem in this city.

DHARNA NOOR: The report’s author, advocates with the Right to Water Coalition, and council members presented the results at a press conference outside City Hall on Tuesday. They said residential water bills have not only risen dramatically in the city, Baltimore has increased the cost of water and sewer service by 127 percent since 2010, but also that the increases for ratepayers far outpace other cities.

CHARLY CARTER: That is nearly 10 times the rate of inflation. At the same time, black and brown families in this city have not seen an increase in wages. What we’ve seen as wages stagnate or even fall back a little.

DHARNA NOOR: The report’s author, Coty Montag, found that this year, water bills will be unaffordable, meaning that they’ll exceed 2 percent of household income, which is a commonly used water affordability metric, for black households in 118 of 20 census tracts. By 2020 that number will rise to 131 of 200 census tracts. In January the city approved another 30 percent rate hike over the next three years. They say they need the money to repair the city’s crumbling water and sewage infrastructure.

COTY MONTAG: The first rate increase as a result of this new measure will hit residents’ bills in just a few weeks, on July 1. And we know that this racial inequity and water affordability crisis will only worsen as water rates continue to rise, as they are planned to.

DHARNA NOOR: As though this isn’t bad enough, city water bills’ collection methods usher in a whole host of other issues for families, especially black families in Baltimore.

RIANNA ECKEL: Until recently, the city has relied mainly on using tax sales as a form of collection. So that’s when the city will potentially send a family’s home up on the tax sale list. They auction off the liens on the properties online every May. And then as a result, families were losing their homes, losing their places of worship, losing rental properties. So that’s why we were working with Senator Washington and Delegate Nick Mosby to pass a water Taxpayer Protection Act last General Assembly session, which removes water bills from that process. So now water bills will no longer be a reason anyone gets sent to tax sale in the city.

COTY MONTAG: Bills might be inflated. They might be incorrect. The Department of Public Works is not offering people a really valid mechanism to challenge this bill. So all you can do right now is go on the website and fill out a form if you have a leak, and you have to show proof that you got that leak fixed in order to get your bill adjusted. But if you have an inflated bill for other reasons there’s no guarantee that the Department of Public Works is going to help you. You cannot request a hearing any longer.

In 2016, Baltimore eliminated the ability for residents to request a hearing to challenge their water bills. Now, instead of a hearing, customers can only complain about water leaks through a written online form which does not guarantee a bill adjustment or help customers with issues other than leaks, such as bills that are incorrect or inflated for other reasons.

COTY MONTAG: Essentially, the 14th Amendment to the Constitution provides that there have to be certain due process, procedural protections for folks, including for water services. And so if the city is not able to rectify these issues, advocates could bring a lawsuit.

DHARNA NOOR: The author, affordability advocates, and council people also called for more robust affordability programs and an independent water bill dispute process through the passage of the Water Accountability and Equity Act. It was proposed by then-council president, now-Mayor Jack Young, and is set to go to a council taxation committee hearing in the coming months.

RIANNA ECKEL: The legislation, which is supported by more than 50 organizations, would create an equity-based water affordability program as well as an independent office to handle water billing disputes: The Office of the Customer Advocate.

COTY MONTAG: You know, what we’re really seeing nationwide is that the history of residential segregation ultimately leads to these water issues. And so back in the 1960s, my organization Legal Defense Fund bought the first ever lawsuit alleging municipal inequalities in water services. And this really builds upon that, that we haven’t really seen any change in those years. And so we really think these water shutoffs, water lien sales, are really building on this legacy of segregation and really must be corrected.

Stir Crazy! Episode #42: “A Riot is the Language of the Unheard”