International Law Requried Manning to be a Whistleblower 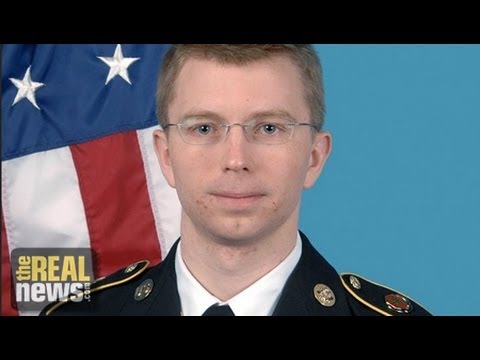 On Wednesday, Bradley Manning was sentenced to 35 years in prison for releasing 700,000 documents related to U.S. diplomacy and the wars in Iraq and Afghanistan.

Now joining us to get right into it is Vijay Prashad. Vijay is going to be the Edward Said Chair at American University in Beirut this year. And he’s the author of many books, including The Poorer Nations: A Possible History of the Global South. And he writes regularly for The Hindu, CounterPunch, and Frontline magazine, where he has an essay on Bradley Manning’s trial.

DESVARIEUX: So, Vijay, let’s just get right into it. What was your reaction to the sentence?

PRASHAD: It’s 35 years. It’s less than the 90 years that the prosecution wanted. It’s a lot more than the zero years that Bradley Manning should have received.

But let’s put these 35 years in context. A few years ago, a former CIA analyst, John Kiriakou, was sentenced to what was at that time the longest sentence for a whistleblower. And Mr. Kiriakou got two and a half years as his sentence. So that’s the first thing that we should recognize, that this is by far the longest sentence handed down to a whistleblower in U.S. history, much longer than the two and a half years which was the previous sentence.

You know, the other quite stunning thing is simultaneously with Bradley Manning’s, you know, sentencing period, also the trial, has been the sentencing period of another case, another U.S. military person, Sergeant Robert Bales, who in 2012 went on a so-called rampage in Afghanistan and killed at least 16 Afghan civilians in cold blood. And it is likely that Sergeant Robert Bales will receive ten years in prison. So if you just take the 30 years in context, it’s a lot longer than the previous whistleblower sentence of two and a half years, and it might be even longer than the sentence handed down to a sergeant who killed 16 people in cold blood. Mr. Manning, as far as we know, has killed nobody.

DESVARIEUX: Okay. You mention the length of the sentence, but some are even criticizing just him going to jail for exposing war crimes. And if you compare that to those that were–ordered the use of torture, like Bush and Cheney, and how they haven’t even faced prosecution, what do you make of that argument?

PRASHAD: Well, that’s the fundamental argument. I mean, the question of whether Mr. Manning is–you know, did break any laws or not. It should be said that this judge understood that the government case was excessive. In other words, she threw out the charge that he was aiding and abetting the enemy, an absurd charge on the face of it.

I mean, the United States has extremely weak whistleblower protections. So, you know, let’s put it this way. It’s not a surprise that Bradley Manning was found, you know, guilty and has been given such a hefty sentence in terms of U.S. law.

I think it’s outrageous in terms of international law. It’s outrageous in the face of, you know, the reason why Mr. Manning felt beholden to release this information. And that comes to at least two war crimes for which he had seen evidence, one the Apache helicopter shooting in 2007 in Baghdad, in Iraq, and the second one in Granai in Afghanistan, I think, in 2009. These two direct video depictions of war crime, what he thought were war crimes, you know, were not being taken seriously by the chain of command. That is the reason why Bradley Manning decided to release this information.

But because there are no real whistleblower protections in the United States, Mr. Manning, it was inevitable, was going to face a long sentence.

And, you know, the game, obviously, is not up. So we shall see what happens next. But there is no sign that there’ll be any reduction of his sentence either by his superiors in Washington, D.C., or indeed by the Court of Criminal Appeals, which is the final board of the military as far as this case is concerned.

DESVARIEUX: And we should also note that Manning will have to serve a third of his term before he’s even eligible for parole, a third of his sentence.

PRASHAD: Well, the first thing, I think, to pay attention to is that the mainstream media gives a wide latitude to the managers of the U.S. system vis-à-vis questions of legality and illegality, particularly on the terms of warfare. So when the Iraq War was being considered openly in the United States, the press was very reticent to ask questions. You know, in fact, many of the important newspapers in particular and the TV channels certainly became cheerleaders for the war. You know, people forget that The New York Times, whose editorial board so frequently likes to appear, you know, as if it is on the mountain of Olympus, you know, passing judgment on the world, was at the same time the paymaster of Judy Miller, who was one of the lead reporters to waive the red flag in front of the American or at least the George Bush-led bull. So in that sense, the media has never been good on warfare in general.

In the terms of the illegality of the war in general, that is, the illegality of the Iraq War, which is in a sense a crime against peace, that was never raised by the media. When war crimes were revealed, spectacularly in Abu Ghraib, you know, many, many instances of violence against civilians, bombings by aircraft at civilian neighborhoods, even the killing of journalists, as the killing of the Al Jazeera reporter during the war, you know, when his building was targeted, you know, these incidents also did not raise the ire of the American media. And, in fact, when a senior CNN producer at Davos, Switzerland, raised the question of targeting of journalists by American forces, he was forced, you know, by CNN and by pressure on CNN to resign.

DESVARIEUX: Alright. Thank you so much for joining us, Vijay.