Self-declared interim president Juan Guaidó returned to Venezuela without incident, despite having violated a travel ban. NSC chair John Bolton continued his threats against Maduro, warning him not to arrest Guaidó and reaffirming the US's right to intervene in Latin America

Self-declared interim president Juan Guaidó returned to Venezuela without incident, despite having violated a travel ban. NSC chair John Bolton continued his threats against Maduro, warning him not to arrest Guaidó and reaffirming the US's right to intervene in Latin America 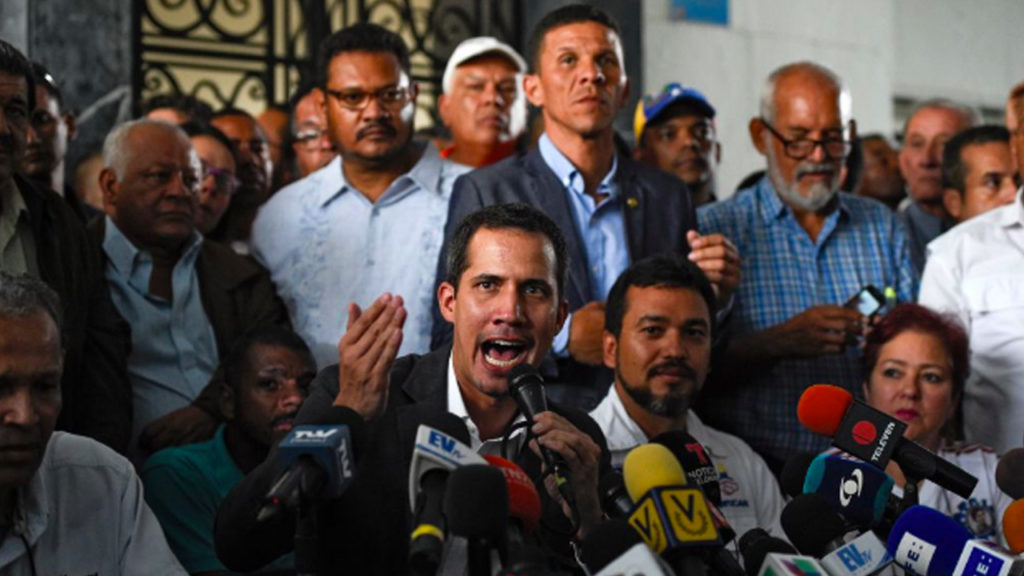 GREG WILPERT: Venezuelan opposition leader and self-declared interim President of Venezuela Juan Guaidó returned to Venezuela without incident on Monday. He had defied a court order not to leave the country when he went to Colombia on February 23 to accompany U.S. aid trucks as they attempted to cross the border from Colombia to Venezuela. He then toured several other Latin American countries, visiting with the presidents of Paraguay and Ecuador. Immediately after his return to Venezuela, Guaidó attended a rally with his supporters in the wealthy neighborhood of Las Mercedes.

JUAN GUAIDO: They threatened all of us who are here—you saw it—with prison, with death. And I say something to them: it has not been through persecution, it will not be through threats that they are going to stop us. Here we are, and we are stronger and more united than ever, here we are, and we’re much stronger than ever.

GREG WILPERT: On Tuesday, Guaido meet with public sector unions and supported the idea of a general strike against the Maduro government.

Shortly before his return, U.S. National Security Adviser John Bolton threatened the government of President Nicolas Maduro, tweeting: “Venezuelan Interim President Juan Guaido has announced his planned return to Venezuela. Any threats or acts against his safe return will be met with a strong and significant response from the United States and the international community.”

The day before this tweet, Bolton was on CNN with Jake Tapper, where he clarified that the Trump administration believes in enforcing the Monroe Doctrine:

SPEAKER: Do you not see that United States support for other brutal dictators around the world undermines the argument you are making?

JOHN BOLTON: No, I do not think it does. Look, in this administration we are not afraid to use the phrase Monroe Doctrine. It’s been the policy of administrations going back to Ronald Reagan to have a completely democratic hemisphere.

GREG WILPERT: Jake Tapper did not, however, remind Bolton of the dirty wars in Central America under Reagan or its support of General Pinochet in Chile, among numerous other anti-democratic actions.

Meanwhile, Guaidó, in his on-going effort to create a parallel government with the support of the US and its allies, named Harvard University economist Ricardo Haussmann as his representative to the Inter-American Development Bank. Guaidó has already named ambassadors to the US and numerous other countries that recognize Guaidó as Venezuela’s president. Haussman briefly served as Venezuela’s planning minister under President Carlos Andrés Perez, where he contributed to the neoliberalization of Venezuela’s economy.

Finally, Chavistas are conducting memorial services throughout Venezuela, to commemorate the 6th anniversary of Hugo Chávez’s death, who died of cancer on March 5, 2013. Chávez was the leader of Venezuela’s Bolivarian Revolution and is considered to be something of a second liberator of Venezuela, after the liberator Simon Bolivar, who fought for Latin America’s independence from Spain in the 19th century.