Economic sanctions were already a serious blow to Iran and Venezuela's hospital capacity. The Trump administration's determination to increase them could make it even harder for the two countries to contain the virus.

Economic sanctions were already a serious blow to Iran and Venezuela's hospital capacity. The Trump administration's determination to increase them could make it even harder for the two countries to contain the virus. 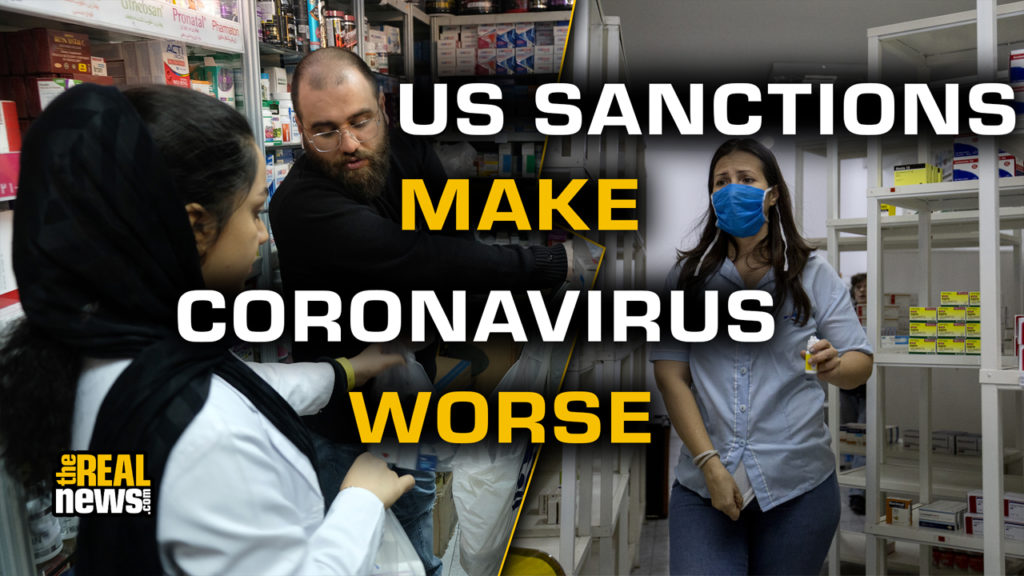 While the world is reeling from the coronavirus pandemic, the Trump administration has decided to intensify its sanctions against countries such as Iran and Venezuela, dealing a serious blow to those countries with regard to their ability to cope with the disease.

When it comes to the number of coronavirus cases, Iran is in third place in the world after China and Italy, with 18,400 reported cases as of this Thursday. Over a thousand new cases are being reported every day in Iran, and so the virus is still far from having reached its peak in that country.

In contrast, Venezuela has only 36 reported cases so far, one of the fewest in the world, but the government has taken immediate measures to contain the outbreak. On Monday, it declared a national quarantine, closing down practically all commercial activity and movement. US sanctions on Iran and on Venezuela are making it extremely difficult for those countries to import badly needed medicines and medical equipment. And the Trump administration has announced that its sanctions will only get tougher.

Joining me now to discuss the impact of the sanctions on Iran and Venezuela are Kathy Kelly and Leonardo Flores. Kathy is a peace activist, pacifist and author, and currently co-coordinator of the group Voices for Creative Nonviolence. Leonardo is originally from Venezuela, and is a campaign coordinator with the peace group, CODEPINK.

Thanks, Leo and Kathy, for joining us today.

Greg Wilpert: So let’s start with you, Kathy. You recently wrote an article calling for an end to US sanctions on Iran. Talk about what effect the sanctions are having on Iran’s ability to manage the coronavirus pandemic, and what the larger effects are, actually, that you’ve also mentioned in your article.

Kathy Kelly: The Iranian foreign minister, Javad Zarif, had written a letter to the United Nations Secretary General, António Guterres, and he said, “This is a crime against humanity.” He said that the United States’ imposition of the economic sanctions is now making it extremely difficult for Iranians to cope with the spread of the coronavirus.

And it’s really… Particularly on this day that is, I guess, the commemoration of the beginning of the United States’ shock and awe bombing of Iraq, we see this terrible menacing history wherein the United States basically says to other countries, “If you don’t subordinate yourselves to fulfill our national interests, we’ll eliminate you. And if you don’t believe it, look what we did to Iraq.”

And now see what’s happening to Iran. The Independent just reported that one person dies every 10 minutes from the coronavirus in Iran.

Greg Wilpert: And turning to you, Leo, you recently wrote about how the US sanctions on Venezuela are affecting its ability to deal with the coronavirus. Give us an idea as to what the sanctions have meant concretely for Venezuela’s management of the pandemic.

Leonardo Flores: Well, in general terms, the sanctions have decimated Venezuela’s economy over the last five years, causing about $130 billion worth of damages. Meaning that there’s been a 90% drop in foreign exchange earnings, and that’s led to the deaths of 100,000 Venezuelans already. That’s according to Alfred de Zayas, the former UN special rapporteur.

And then concretely in the case of coronavirus, well, I think we’ve all seen the graphs by now showing the two curves. One showing a huge spike if we don’t do social distancing. The other one more moderate. And then there’s always the horizontal line showing hospital capacity. Well, if we think of that graph, what the US has been doing in Venezuela and Iran has been pushing that line of hospital capacity way down because of the impact that sanctions have had on health sectors.

And so, President Maduro mentioned the other night in a televised address that the coronavirus test kits cost Venezuela three times as much as they do for non-sanctioned countries. And we see similar things happening in the private sector, as well. So there’s a pharmacy chain that operates in both Columbia and Venezuela, and in Venezuela they’re selling a pack of face masks for about $5. And across the border, a similar pack of face masks is going for about 60 cents. And that’s entirely due to the sanctions.

Greg Wilpert: Leo, as I mentioned earlier, Venezuela has so far had relatively few cases of the coronavirus. The government is taking very strong measures to deal with it. What exactly are those measures, and why are they so strong considering how few cases there are so far?

Leonardo Flores: Well, it’s precisely because there are few cases right now, and that the government has an opportunity to stem the tide. So the first two cases were confirmed on Friday the 13th, a little less than a week ago. By Monday, there were 33 cases, and that’s when the national quarantine was set in order.

According to the government, 90% of Venezuelans are heeding this order. So, a lot of people are taking it very seriously, in contrast to what we see here in the United States. And because I think the people and the government understand that unless these drastic measures are taken, the hospital systems are going to be overwhelmed. And so, that’s really the only way for the Venezuelan government at this time to fight the disease, is by preventing its spread.

Greg Wilpert: Kathy, I want to turn to you again. The US sanctions on Iran are supposed to include exemptions for humanitarian aid, which in theory would include medicines. Now, has that had an effect, and if not, why not?

Kathy Kelly: The United States has been at war against Iran since the tightening of the sanctions back in 2018. 70% of Iran’s governmental revenues came from the sale of oil. The United States bullied other countries like India, South Korea, Europe, not to buy Iran’s oil. So then when the country doesn’t have the income that’s necessary to maintain all of the various sectors of society, then it becomes very, very difficult for banking to be workable, for the different kinds of insurances for importation of medicines, the transportation.

And so, no, the United States is not making a humanitarian avenue for medical supplies and equipment and medicines to get into the country. And so, this has led, similar to what every other country has seen, to very, very alarming spikes. But right now, 1,135 people died at the last count that I read, and that 17,361 people are afflicted with the virus.

Well, keep in mind also that Afghanistan is a country with millions of migrants who come over from Afghanistan. And as people from Afghanistan are trying to go back to their country, this is going to spread the rise of the virus in Afghanistan, as well, because there’s not anything like adequate testing and the borders are very porous.

Greg Wilpert: Now, has there been an international response yet to the calls for an end to sanctions on Iran and on Venezuela?But let’s start with Iran, Kathy.

Kathy Kelly: Well, I think there are European countries who could do much more to say they’re not going to abide by the sanctions that the United States has put in place. You hear discussions, but always the Iranian foreign minister, Javad Zarif, is saying, “Look, we need more help, we need more cover.”

The appeal to the International Monetary Fund for the $5 billion both on the part of Venezuela and Iran isn’t the kind of measure that a country wants to take. That will put them in debt, and structural adjustment programs, and many, many, many future problems. But that’s again one way that other countries in the world could weigh in. They could say, “Do not block this,” even if the United States starts to say, “No, no, no, you can’t put through that loan.”

Greg Wilpert: Well, actually, that was going to be my next question also for on Venezuela is first of all, is there an international response, or what kind of response is there with regard to halting the sanctions against Venezuela? But Venezuela has also asked for a $5 billion loan from the International Monetary Fund to cope with the coronavirus.

So, Leo, talk about both the response and what might be, or has happened, with regard to the request for an IMF loan.

Other than that, there’s been very little movement, particularly in South America where you would think that Venezuela’s neighbors would want the sanctions lifted so Venezuela could deal with this public health crisis, rather than have migration affect the spread of the disease in say, for example, Brazil or Colombia.

Regarding the IMF, the IMF set aside a huge amount of money to deal with this pandemic. And Venezuela, like Iran, had requested $5 billion for improvements to its health sector. In the case of Iran, my understanding is that the IMF has yet to respond, but for Venezuela they responded almost immediately, saying that there was no clarity as to who the government of Venezuela is represented by. Despite the fact that President Maduro’s representative to the IMF is still seated at the IMF.

And this is due entirely to the fact that basically the IMF responds to the US Treasury Department, and the US government is backing, of course, Juan Guaidó, the man who proclaimed himself president of Venezuela. And so, now we’re seeing how this coup attempt in Venezuela is having a direct impact on Venezuela’s ability to handle the coronavirus epidemic.

Greg Wilpert: Okay. I think we’re going to wrap it up there. I don’t know. Kathy, do you have anything else to add to this?

Kathy Kelly: [inaudible 00:10:31] It’s a new year time in Iran, a time when people traditionally come together. And of course, for the sake of people, it must be encouraged I suppose that people not come together. But I hope that people will spare a thought for all of the people in other parts in the world who suffer badly because of the distorted priorities of a permanent warfare state in the United States.

Greg Wilpert: Right. Okay. We’re going to leave it there for now. I was speaking to Leonardo Flores, CODEPINK organizer, and Kathy Kelly with Voices for Creative Nonviolence. Thanks again, Leo and Kathy, for having joined us today.