Three out of five weapons used in Yemen are supplied by the US says Andrew Feinstein, the author of Shadow World: Inside the Global Arms Trade

Three out of five weapons used in Yemen are supplied by the US says Andrew Feinstein, the author of Shadow World: Inside the Global Arms Trade

US Complicit in War Crimes in Yemen 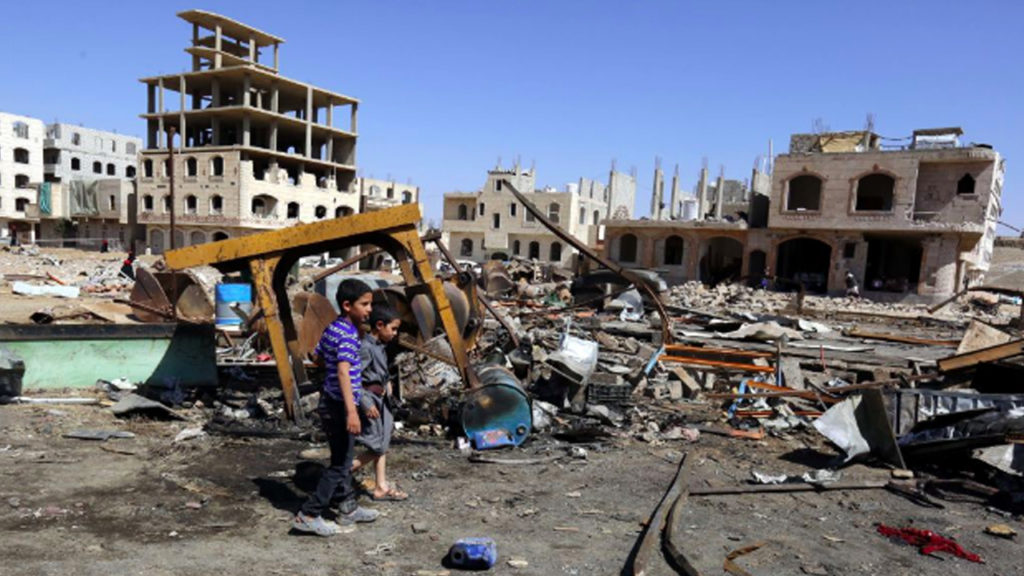 On Thursday the House voted to end the U.S. support for a Saudi-led coalition waging war in Yemen, which is also committing war crimes with American-made weapons. Unfortunately, it seems that President Trump will likely veto the resolution. As you will recall, the U.S. President Donald Trump upon taking office visited Saudi Arabia in May of 2017, making a point of bucking the tradition of going to Canada or Mexico as his first state visit. While there, he announced a $110 billion arms deal, claiming that the deal will create half a million jobs. The jobs theory was debunked by a Reuters investigation into how many jobs it would actually create, and they found less than a few thousand, like 2000. But the arms sales theory looks like it’s holding up. Data really show that in fact the Saudi coalition has already purchased tens of billions of dollars worth of arms from the U.S. to be used in the war in Yemen.

Now, new data from the Security Assistance Monitor, a research organization affiliated with the Center for National Policy, states that since the beginning of the civil war in Yemen the Saudi coalition has bought $68.2 billion dollars in U.S. weaponry. On Sunday, one of those very expensive missiles which is made in the United States fell on a school in the capital city of Sana’a, killing 13 civilians and injuring many more; 87, as far as we know thus far.

Now, Ayat Tahir is one of the students in the school, and she gave the following testimony sitting in a hospital bed to Chinese television, CCTV.

AYAT TAHIR: We went back to the classroom after the break. Then the enemy aircraft dropped the bomb and everyone wanted to run home. [I saw] four or five people trampled to death and eleven injured. It was very noisy and crowded in the school. People were running over the bodies of those who fell. And then I came to the hospital and many of us here feel some tightness in the chest.

SHARMINI PERIES: On to discuss all of this with me is Andrew Feinstein, the executive director of Corruption Watch UK and the author of The Shadow World: Inside the Global Arms Trade, which is a book and a film one must see. Good to have you here with us, Andrew.

ANDREW FEINSTEIN: Thank you. Good to be with you.

SHARMINI PERIES: All right, Andrew. Now, the Saudi coalition is buying enough weapons, it appears, to conquer a small continent. This is not even a conventional army that they’re countering. It is a poorly armed, poorly trained rebel group. So what is exactly going on here?

ANDREW FEINSTEIN: I think there are a number of things happening that really encompasses the foreign policy of the United States, the arms trading that you mentioned, and really exemplifies why the Middle East is such a febrile and catastrophic region at the moment. The United States, together with the United Kingdom and other European countries have been absolutely instrumental in the Saudi-led coalition’s involvement in the Yemen conflict.

Now, that involvement intensified in March of 2015 on the side of the Yemeni government, who supposedly invited the Saudi-led coalition into the country against a vast group of opponents, the best known of which are the so-called Houthi forces. But the reality of the conflict is that the Saudi-led coalition, which also consists of the United Arab Emirates, who are largely conducting the war on the ground while the Saudis conduct the air war that has taken place, and both countries are involved in the naval blockade of the country, has been described as one of the worst humanitarian disasters that has been seen in the world for decades and decades. We believe that 67,000 people have died directly as a consequence of the violence, anywhere between five and fifteen thousand of those being innocent civilians. But what makes this so particularly awful and tragic is that those civilians have not been killed as collateral damage, as often happens in conflict, but have been directly targeted, largely by the Saudi-led coalition.

Now, this is something that a number of United Nations reports has actually documented. This is not something that is based on hearsay, but it is actually documented evidence. In addition to which while we have seen these violations of international humanitarian law and human rights. And the committing, as you suggested in your intro, of war crimes against the people of Yemen. This would not be possible without the support of the United States of America, which has provided not only three out of every five weapons that is being used in Yemen, but is also providing a whole variety of additional support to the Saudi led coalition. This includes midair refueling of the jet fighters that are dropping the bombs and missiles. It includes intelligence support. And perhaps most damning of all, it includes assistance with targeting.

Now, what this means is that the United States is complicit in the war crimes that are being committed in Yemen. And what makes it even worse is that American companies and individuals are making huge profits out of this human catastrophe. Since March of 2015, the United States, both government and companies, have sold Yemen and the United Arab Emirates $68.2 billion of weaponry.

Now, when one thinks that the United Nations has launched an aid appeal for Yemen in which they are trying to raise $4 billion, we need to understand that the arms sales from the United States alone have totaled 17 times the United Nations’s Yemen appeal. And what is this actually about? It is about Saudi and the United Arab Emirates extending their influence in the Middle East. Primarily, I believe, it is a precursor to an ultimate attack on Iran and the neoconservative objective of regime change in Iran.

SHARMINI PERIES: Please join us for our conversation, our continuing conversation with Andrew Feinstein, who is executive director of Corruption Watch UK. We’ll be right back.

Andrew Feinstein is the Executive Director of Corruption Watch UK and author of ‘The Shadow World: Inside the Global Arms Trade’. This book has recently has been turned into a film that explores the world’s largest and most corrupt arms deals through those involved in perpetrating and investigating them. He also served the ANC under…