Tensions flare as Ukraine imposes martial law and President Poroshenko requests a major NATO military presence in the Black Sea, while Russia sends troops to Crimea and its border. Historian Tarik Cyril Amar speaks about the increasing militarization of the conflict

Tensions flare as Ukraine imposes martial law and President Poroshenko requests a major NATO military presence in the Black Sea, while Russia sends troops to Crimea and its border. Historian Tarik Cyril Amar speaks about the increasing militarization of the conflict 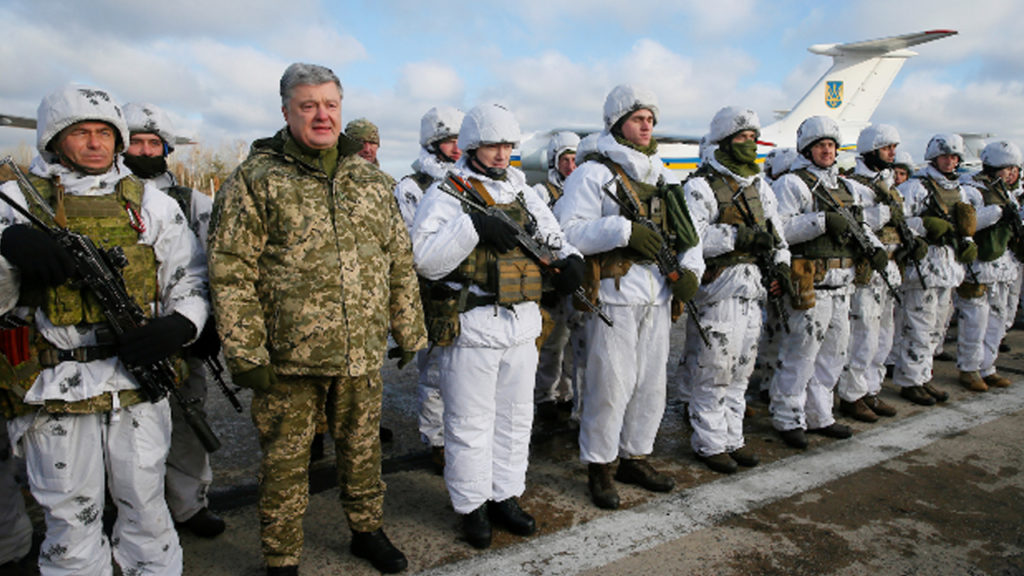 A growing military buildup in Ukraine and Russia has put the world on edge. Ukraine has imposed martial law and requested a major NATO military presence in the Black Sea and Russia is sending troops to its border.

In a disputed incident on November 25th, the Russian Coast Guard fired at and captured three Ukrainian navy vessels that were trying to cross from the Black Sea into the Asov Sea. Russia claimed these waters as its own territory and said that it told Ukrainian ships not to enter but they were refusing to respond to its radio warnings.

Ukraine, on the other hand, has called this an act of Russian aggression and has claimed that Russia is preparing for an invasion. The Ukrainian government exploited Azov Sea incident and responded by imposing martial law in the country. This martial law allows the government of far right president Petrol Poroshenko to impose restrictions on elections, movement, expression and meetings. Poroshenko also responded to the incident with a call for further militarization of the Black Sea.

The Ukrainian president requested that NATO sends a major military presence into the Black Sea. He also asked for NATO allies to send more weapons. At the same time, U.S. media outlets are reporting that Russia is sending troops to Crimea and also sending tanks to its border. New photos from Google Earth shows Russian tanks at a military base about 20 kilometers from the border of eastern Ukraine. And the Israeli satellite company, ImageSat International, sent exclusive photos to Fox News that allegedly show a buildup of Russian military forces in Crimea.

So joining us to make sense of this military buildup in both Russia and Ukraine, we are joined by scholar Tarik Cyril Amar. Tariq is a historian of the 20th century. He previously taught at Columbia University and is now professor in the Department of History at Koc University in Istanbul. He is the author of the book, The Paradox of Ukrainian Lviv. Thanks for joining us, Tarik.

TARIK CYRIL AMAR: Thank you very much for having me.

BEN NORTON: There’s a lot to respond to here and I want you to help us unpack what’s going on with the military buildup. But another important piece of context that I want to add is that the Ukrainian opposition is accusing the government of using this incident to delay the upcoming presidential elections. Petro Poroshenko has been really falling in a lot of the polls and is quite unpopular at the moment. And the presidential election was due to happen in March 2019, but now that martial law, of course, could be used to delay these elections. A recent poll found that 58 percent of Ukrainians oppose the martial law, whereas 33 percent of Ukrainians support the martial law. That poll found that 63 percent of Ukrainians believe that Poroshenko imposed the martial law specifically in order to delay the presidential elections.

Can you respond to the news of the Azov Sea incident, the imposition of martial law and then the military buildup on both the Russian and the Ukrainian side.

TARIK CYRIL AMAR: Yes, I’ll try to go through several points here. Let me first of all say one thing. I’m not quite sure if I heard you correctly, but I should point out that although I personally am very critical of Petro Poroshenko the president and his block or his party, I don’t think it’s quite right to see him as far right. Ukraine has a far right problem and I hope we can talk about this later as well. Poroshenko’s great problem is a bit different, namely that he is very much part of the old oligarchy that existed long before the Maidan Revolution of 2013, 2014 – It was, of course, the second Maidan Revolution – and that he is a great disappointment, I think, at reform outside Ukraine but also to many Ukrainians.

Now, let me talk about the Azov incident. As far as I understand, the incident is weird enough. There are questions of international law involved, as the question of, of course, the status of Crimea and of a treaty of 2003 which both sides interpret differently. As you probably know, many politicians who have called on Ukraine for restraint, for instance Angela Merkel, the chancellor of Germany, have nevertheless put the blame for the incident as such squarely on the Russian Federation or on Putin. The Russian Federation, of course, sees this very differently.

Now, what is odd about the conjunction of this incident and the declaration of martial law in Ukraine is the fact that Ukraine has already been through several years of de facto warfare with separatists and rebels who are backed by Russia in the east of the country, in parts of Donbass and Luhansk Oblast regions in Ukraine. But although there have been much more severe battles and much more severe crises in this fighting, martial law has never been declared before. And that, of course, makes observers inside Ukraine, including the opposition and, as you have pointed out, many Ukrainian citizens, extremely skeptical as to why President Poroshenko is declaring it now. And the suspicion is that it does have something to do with the upcoming elections in 2019.

In this respect, let me add one factor which is often, I think, overlooked. That is that the initial plans for martial law on the side of Poroshenko were much more severe than what he was finally, or in the end, able to actually get through parliament. He ran into considerable opposition and he had to make many concessions. But if we look at what he wanted to impose, it was even worse than what was actually imposed. And that, of course, in my view is not good news, it’s bad news in a way because it speaks to his intentions, which were even more radical.

Concerning martial law, one more thing should be pointed out. It is in force in ten regions of Ukraine, not in all of Ukrainian regions, that’s one of the compromises that Poroshenko had to make. But nevertheless, if you analyze the text carefully, it does contain the possibility of postponing the elections even though it is officially limited to thirty days. And it certainly provides Poroshenko with incentives to, if he wishes to do so, exploit the crisis and exploit tension with Russia in his own political favor, to basically help him win these elections or give him a second chance, because his ratings are actually very bad.

BEN NORTON: Thank you for that important clarification. It’s important to just point out, as you said, Poroshenko himself is not far right, there certainly are far right elements in the government, and that’s an important correction. And on that note, can we talk about the domestic situation and why Poroshenko is unpopular. Specifically, in October, we saw that Poroshenko and his administration agreed to a four billion dollar loan from the International Monetary Fund, the IMF. They’ve been going through some economic problems and there are also widespread allegations of corruption.

And then, so I’m wondering if you could speak about why Poroshenko has low approval ratings and the opposition is leaning against him in the polls for the upcoming presidential election next year. And then also, you mentioned the legality of the incident. I believe that Ukraine is saying that the waters in which its vessels were taken were international waters but Russia claims that those waters are its own territorial waters. So I’m wondering if you could respond to the conflict where Russia is claiming waters that I believe under international law are international waters.

TARIK CYRIL AMAR: Yes. To take the last point first, I’m not an expert in international law, but my understanding is that in this case the Ukrainian position is more plausible. Russia’s position builds, among other things, on the idea that its annexation of Crimea is legitimate. A very large number of states and of observers disagree with that opinion and consider that an illegitimate annexation. That is one fact already that means that the Russian interpretation of this whole situation is very fragile indeed. However, the legal situation, maybe as it is … or I personally think Russia is in the wrong, Ukraine is principally in the right.

What we should not miss is that that fact doesn’t exclude that part of the Ukrainian government that is currently in power in Kiev might nevertheless, at same time, also exploit the situation for their own purposes. I am aware that this is something that President Putin is also saying, and of course we are now in a climate where it’s very dangerous to say anything that resembles anything that Putin says. But I think in this respect, it’s not an unrealistic idea that, unfortunately, this whole escalation and set of tensions can also become results in Ukrainian domestic politics.

Now, why is Poroshenko so unpopular? I think there are several reasons. One, of course, is great disappointment. Basically, the same thing happened to President Yushchenko, who came into power as a result of the first Maidan Revolution of 2004, 2005, and who also managed to rapidly squander the enormous enthusiasm that at least more than half of the population felt for him. Poroshenko has now suffered a very similar fate. He has not been able to convince many Ukrainians that he is fundamentally different from the old regime, as it were. Ukrainians and others suspect, and I think with some reason, that he also is not above corruption and that he is not above the politics that are fundamentally not politics of good faith.

There is, of course, also the economy, which has not, until now, worked out well for many Ukrainians. And there is, of course, also the fact that the war has been dragging on now for many years and has not been in any way successful or an experience that Ukrainians can in any way enjoy or like. With all the patriotism that of course came up in 2014 and 2015, I think there’s also a certain fatigue for this type of fighting. There is a fatigue not only because of casualties but also with displacement and economic disruption. And all these factors, I think, are beginning – I don’t think so, I think it’s very clear that they’re beginning to tell against very clearly.

BEN NORTON: Well, we will continue our discussion here with Tarik Cyril Amar to discuss the situation in Ukraine and specifically the point he raised earlier of the far right elements in the government, Poroshenko himself and the conflict going on with neo-Nazis inside Ukraine, some of which are actually supported by elements of the state and some of which are actually fighting elements of the state. So we’ll unpack that in another segment.

Tarik Cyril Amar is a historian of the 20th century, specializing in the history of Ukraine, Russia, and the Soviet Union. He is an associate professor in the department of history at Koç University, and was previously an assistant professor of history at Columbia University. He received his BA from Oxford University, MSc from London…