North and South Korea are moving ahead with plans to build road and rail links as part of their historic peace talks. But the U.S. is standing in the way, as Trump refuses to lift sanctions and claims that the South Koreans "do nothing without our approval." We speak to Col. Lawrence Wilkerson

North and South Korea are moving ahead with plans to build road and rail links as part of their historic peace talks. But the U.S. is standing in the way, as Trump refuses to lift sanctions and claims that the South Koreans "do nothing without our approval." We speak to Col. Lawrence Wilkerson 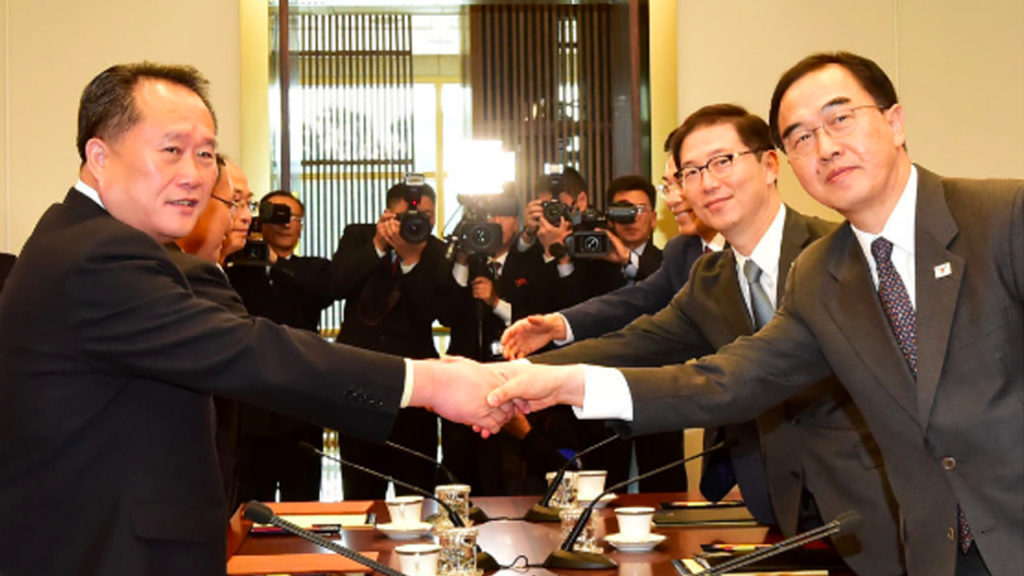 North and South Korea have reached new agreements in their ongoing unity process. The two sides are moving ahead with plans to build road and rail links, and will discuss more steps in the coming weeks. But there are new signs that these connections face a major roadblock in Washington. Last week, South Korea proposed lifting a set of sanctions it imposed on North Korea in 2010. When President Trump was asked about that, Trump said they do nothing without our approval.

AARON MATE: The U.S. says that sanctions will only be lifted after North Korea shuts down its nuclear program. But North Korea insists the U.S. follow the first two steps in their joint declaration, which call for new relations and a peace regime in Korea.

So could this be an impasse that threatens peace on the Korean peninsula? Well, joining me is Colonel Lawrence Wilkerson. He is the former chief of staff for Secretary of State Colin Powell; now a distinguished professor at the College of William and Mary. Welcome, Colonel. What do you make of this apparent standoff right now between the U.S. and the two Koreas when it comes to this issue of sanctions?

LARRY WILKERSON: I don’t think President Moon Jae in and his foreign minister, and others associated with the national security apparatus in South Korea, will take this as a put down. Let me rephrase that. They’ll take it as a put down, surely. But I think they’re so heavily invested in it right now that they’re going to run this right to the end, as it were.

And I think the end for Kim Jong un, and this is very much unchanged through the three Kims, is to separate the United States and South Korea. As just an impartial onlooker at this point, I’d have to say that Kim is registering some success, and the more Moon Jae in and his crew in South Korea knuckle under to the the United States the more success I see Kim having, because eventually they will stop. It might cost Moon Jae in his career, his political career, as I’ve pointed out before. And it won’t be that many times ago that the United States cost other pesidents their political careers, and some on this very issue.

So they’re taking it right now, but the very tone of Trump’s voice when he said, what, two or three times, they don’t do anything without our approval- that’s not going to translate well in South Korea. It’s not going to come across well in South Korea. They’ll take this for so long, but then Kim Jong un is going to get what he wants. He’s going to get the ROK-U.S. alliance fraying at the very center. Not just the edges, but the very center. And I think that’s one of his primary strategic objectives.

AARON MATE: After Trump made that comment, South Korea did cave to the U.S. demands. They stopped asking for a, for a lifting of the sanctions that they themselves imposed on their own in 2010. But how long do you think that this can go on for?

LARRY WILKERSON: I watched it go on for some time earlier, from about 1994-2000 or so, when we were essentially dealing in similar circumstances. It could go on for some time. But I don’t think that this particular regime in South Korea is going to take this particular president, who has no knack for diplomacy whatsoever, as long as previous Korean presidents have suffered U.S. presidents. Let’s face it, no matter how hard I might be on George W. Bush in that first term, or how hard I might be on the real president, Dick Cheney, they were better diplomats than Donald Trump.

So it’s hard to predict how long another country’s leader, feeling the full sovereignty of his own country as well as the diciness of the negotiations they’re involved in, is going to tolerate this President Washington. Every day I grit my teeth, and not just at the Moon Jae in, but at Angela Merkel, and Macron, and a host of other leaders in the world, asking myself the question, how long are they going to tolerate this guy we have in the White House? He simply does not know how to talk.

And with the Asians, particularly the Koreans, this might be tolerated for a while, but eventually it’s going to be extremely disruptive. And as I’ve said, it’s going to give Kim Jong un exactly what he wants. It’s going to give him a fissure in the U.S.-ROK alliance into which he can just continue to pour things. And what does he care if it doesn’t work this time? It will eventually work, probably. And that’s the strategy of the North. They have immense patience. They don’t have the kind of tomorrow-we-must-solve-this attitude that Americans have, that suddenly Moon Jae in seems to have adopted in South Korea, wanting desperately to more or less empower his own political apparatus by successes here. And Kim Jong un knows that. Kim Jong un knows that Moon Jae in is on a plank out over the blue sea, and that his entire political career is being staked on this, this initiative for reunification and for a new relationship with the North.

So it’s very difficult times, and we have no one in Washington who seems to empathize, who seems to understand how difficult are these times. And most importantly, seems to understand that the real pair on the peninsula, North and South Korea, are the center of any negotiations. And to say the kinds of things that Trump has said or suggested, or say the kinds of things that Pompeo has said or suggested, is very dangerous.

AARON MATE: So can North and South Korea basically achieve the goals that they’re setting out? So just today they have this new agreement to go ahead with connecting the two countries via roads and rail links. But to do that, South Korea has to lift some sanctions that they, again, themselves imposed. But if the U.S. is standing in the way and insisting that no sanctions be lifted, can these steps that the two Koreas are making even be realized?

LARRY WILKERSON: Well, let’s come up above that just for a moment, and let’s look at the thing from a truly holistic and strategic perspective. The South Koreans have sufficient military power without any asset from the United States even being on the peninsula or coming to the peninsula in a crisis to defeat North Korea. It would be a much longer war, it would be a much tougher war. We would help a lot with air, in particular. Air power, in particular. But they could defeat the North all by themselves. So that’s the military situation on the peninsula.

So hooking up rail, hooking up power grids, having an economic exchange so that Korean managers from the South go to the North, and teach the North Koreans how to do things, as it were, in a capitalist market-oriented society, having family reunions and visits, and so forth and so on. All of that is cement beginning to be poured, beginning to harden, and beginning to do this what might be an intergenerational task. They don’t share that the United States is sitting there saying you can’t do this, you can’t do this, if they can do it. And they certainly can do it, and they can do it within the existing military balance.

Now, we can let this lie around for a while while Donald Trump exploits it for domestic political purposes for as long as he can. But ultimately it’s going nowhere if we weigh in with that kind of requirement. Because all Kim Jong un will do is get everything he possibly can, including some bribe money, out of the South; get everything he possibly can, and then close off everything, because we will have made him have to close it off. That’s the reality of this. We are the arbiters, but we shouldn’t be. That’s the reality.

AARON MATE: We’ll leave it there. Colonel Lawrence Wilkerson, the former chief of staff to Secretary of State Colin Powell. Now a distinguished professor at the College of William and Mary. Thank you.

As Koreas Make Peace, Will Trump End the War?

Does Washington Want a Korean Peace, or Colony?