According reports in Washington Post and Reuters, the Trump administration is actively exploring the option of placing Venezuela on the state sponsor of terrorism list, to further intensify sanctions that have already caused significant damage to Venezuela's economy. We speak to Steve Ellner about the sanctions' effects

According reports in Washington Post and Reuters, the Trump administration is actively exploring the option of placing Venezuela on the state sponsor of terrorism list, to further intensify sanctions that have already caused significant damage to Venezuela's economy. We speak to Steve Ellner about the sanctions' effects 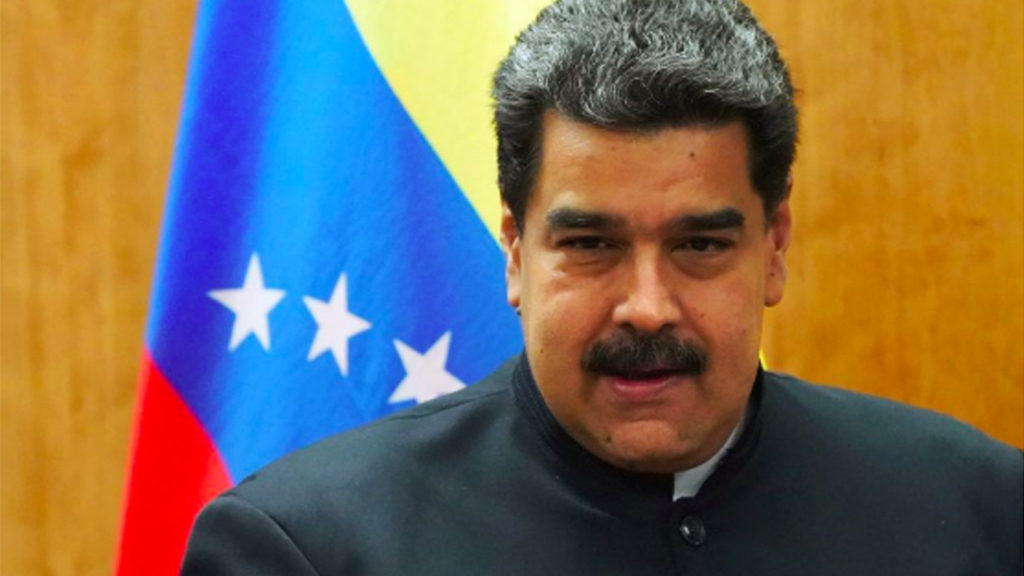 In the latest effort to undermine the Venezuelan government of Nicolas Maduro, the Trump administration is thinking of placing Venezuela on its list of state sponsors of terrorism. This news comes from reports published in both the Washington Post and in Reuters on Monday. As the Washington Post writes, “This would be a dramatic escalation of measures against the Socialist government of Nicolas Maduro.” Already, Venezuela is facing stiff financial sanctions that over the past year have seriously hobbled Venezuela’s oil industry, and haven driven imports to record low levels. The state sponsor of terrorism designation is generally reserved for very few countries, and currently includes only North Korea, Iran, Sudan and Syria.

Joining me now to discuss what this designation would mean for Venezuela and what increased sanctions would mean is Steve Ellner. Steve is a retired professor of history at the Universidad de Oriente in Puerto La Cruz, Venezuela, where he has taught since 1977. Also, he is author and editor of a number of books on Venezuela, and his most recent is Latin America’s Radical Left. He joins us today from Alexandria, Virginia. Thanks for joining us today, Steve.

STEVE ELLNER: Good to be on the program, Greg.

GREG WILPERT: So, let’s start with the sanctions that have been in place in Venezuela so far. President Obama designated Venezuela a serious and extraordinary threat to national security back in 2015 when he sanctioned various Venezuelan government officials. In 2017, President Trump used that same designation to impose severe financial sanctions against Venezuela’s entire economy. So, what effect have these sanctions had on Venezuela’s economy so far?

STEVE ELLNER: Well, in the case of the Obama executive decree or executive order, many people thought it was a joke to say that Venezuela was a threat to U.S. national security. But the fact of the matter is that those sanctions and that designation discouraged investments in Venezuela. In fact, shortly after that, Ford Motor Company pulled out of Venezuela and Kimberly-Clark, a company that produces items of personal wear such as diapers and paper towels, they pulled out as well. After the sanctions that President Trump imposed on Venezuela, General Motors pulled out, and more recently, Kellogg’s pulled out of Venezuela. So that has an effect that goes beyond the literal application of those executive orders, because it convinces the CEOs of large corporations not to invest in Venezuela, in fact to pull out of the country. So that has a direct, immediate effect.

GREG WILPERT: And what are the other, more long-term effects, would you say?

I want to also state, Greg, that even though these sanctions are being applied to U.S. companies and U.S. financial institutions, in effect, it really affects Venezuela’s relationship with financial institutions throughout the world. And we see that plainly now in the case of the sanctions imposed on Iran, because companies like Shell and Total, European companies, even though their respective governments, Great Britain and France, do not support the sanctions against Iran, nevertheless, they have announced that they will not purchase oil from Iran. And Swift, a very important financial institution in Europe, has stated the same. So this is something that has been going on in Venezuela going back a year and a half. These sanctions are affecting Venezuela’s relations with the entire world, the global economy, not just the United States.

GREG WILPERT: So let’s turn to the report now that Venezuela might be added to the state sponsor of terrorism list, and that would presumably make these various sanctions that we’ve been talking about even harsher. Apparently, the claim is based on the allegation that Venezuela supports the FARC and Hezbollah. What’s your reaction to this potential move and the allegation that lies behind it?

STEVE ELLNER: Well, I think for one thing, the United States, at the very outset, has imposed these sanctions on individual government officials without offering any proof. I mean, you’re basically guilty until proven innocent. There are 70 or 80 Venezuelan officials in the Venezuelan government who have been placed on this list. And yet, the U.S. has not provided systematic proof of any wrongdoing on their part. So with regard to the accusation that Venezuela is supporting international terrorism, you know, if the U.S. government doesn’t provide concrete proof, there’s really no form of rebuttal. How can you demonstrate something when there isn’t a formal accusation that is being made with specific proof that can be refuted?

Specifically with regard to the FARC, I was under the understanding, going back to the very beginning of the Chavez government, back to the mid-2000s, as a matter of fact, that the United States, the unofficial policy of the U.S. government, I understand, was that if there was any proof, any concrete proof that the Venezuelan government was aiding the FARC or any of the guerilla movement in Colombia, the United States would go in there, the United States would intervene. So the fact that over these nearly two decades, the United States has not made any kind of formal accusation up until now, would be a demonstration of the fact that that accusation is found without any concrete evidence. With regard to Hezbollah, I’d say the same thing. The Trump Administration would have to come up with concrete evidence and its tendency has been not to do that. Its tendency has been to make these accusations without providing concrete evidence.

GREG WILPERT: I think one should also add that the FARC is actually considered a legal political party within Colombia at the moment, so even supporting them wouldn’t necessarily mean supporting terrorism. But so, considering that the sanctions are causing serious damage to Venezuela’s economy, what is the government of Venezuela doing to counter the sanctions, if anything?

STEVE ELLNER: Well, there are social programs that have been implemented. I think that in terms of countering the sanctions politically, there is a movement, there seems to be a backlash against the sanctions and against the threat of military intervention in Venezuela. I’m not sure to what extent the Venezuelan government is behind this movement, but I see it’s here in the United States. For instance, the New York Times published an article a couple weeks ago criticizing the Trump administration for meeting with military rebels, rebels belonging to the Venezuelan Armed Forces, we don’t know whether they’re active officers or retired officers, but the New York Times criticized that, saying that if the Trump administration met once with these people, that might be excusable, because the objective might be the gathering of information, but meeting three times is an obvious indication that the Trump administration is serious about supporting some kind of military option. So there is a movement, there is evidence that there’s a reaction.

Another example of an encouraging development, which I think the Venezuelan government perhaps may be trying to encourage through non-publicized diplomatic channels, is the case of Mexico. The soon-to-be inaugurated president of Mexico, Andres Manuel Lopez Obrador, has stated that he will reestablish or restore the principle of non-intervention in the domestic issues of foreign governments, which dates back to the Mexican Revolution and is incorporated in the Mexican Constitution of 1917. That principle was broken in the 1990s by the governments of Vicente Fox and Felipe Calderon, and more recently, Pena Nieto. Lopez Obrador has announced that he will play a neutral role, that he will not intervene in Venezuela’s internal affairs and be a voice in of dialogue.

GREG WILPERT: Yeah, actually, that’s what I want to get to next, is the role of the opposition. Currently, it seems to be extremely divided and has almost no coherent leadership. So if these sanctions are further deepened by adding Venezuela to the state sponsor of terrorism list, what effect do you expect this to have on Venezuelan politics and on the opposition in particular?

STEVE ELLNER: Well, I think that’s a good question, because a lot of people don’t know. That the Venezuelan opposition is also polarized. We talk about polarization in Venezuela in terms of the government versus the opposition, but the fact of the matter is that the opposition itself is polarized between a hardline opposition, which now is opposed to any kind of negotiations, their explicit position is refusal you sit down with the Maduro government and engage in dialogue, and a more moderate tendency in the opposition that favors participation in elections. Look, the elections are coming up in a few weeks in Venezuela, and there are several parties that are participating in those elections, including, historically, one of the two major parties, Copei, and another party, the Movement Toward Socialism, MAS, which is not a leftist party anymore, they favor participation in the elections and they have criticized the sanctions, they criticized the military option.

So it seems to me that the decision coming from the Trump administration is really intensifying that polarization and pulling the rug out from under these moderate tendencies within the opposition that favor dialogue. Look, in the last presidential elections, the main candidate for the opposition Henri Falcon, was threatened by the Trump administration with being placed on the list of people, Venezuelans who are being sanctioned if he dropped out of the race. This threat was reported Mark Weisbrot, a well-known economist, Washington-based economist, in the newspaper, The Guardian. And Weisbrot’s source of information was no less than Francisco Rodriguez, the right hand man of Henri Falcon. So the Trump administration is doing everything possible to weaken the moderates and strengthen the hand of the radicals in the opposition who oppose dialogue in favor of regime change.

GREG WILPERT: Okay. Well, unfortunately, we’re going to have to leave it there for now, but I’m sure we’ll come back to you. I was speaking to Steve Ellner, a retired professor from the Universidad de los Andes a Venezuela. Thanks so much for joining us today.

GREG WILPERT: And thank you for joining The Real News Network. If you’d like The Real News Network stories such as this one, please keep in mind that we have started a winter fundraiser and need your help to reach our goal of raising four hundred thousand dollars. Every dollar that you donate will be matched, and unlike practically all other news outlets, we do not accept support from governments or corporations. Please do what you can today.

Steve Ellner is a Contributing Editor ofLatin American Perspectives and the editor of “Latin America’s Radical Left: Challenges and Complexities of Political Power in the Twenty-First Century.