After more than a month of living in the Venezuelan embassy, DC police and secret service broke open the doors to arrest for activists who had been staying in the embassy to protect it against an opposition take-over. The move sets a dangerous precedent, says Medea Benjamin

After more than a month of living in the Venezuelan embassy, DC police and secret service broke open the doors to arrest for activists who had been staying in the embassy to protect it against an opposition take-over. The move sets a dangerous precedent, says Medea Benjamin 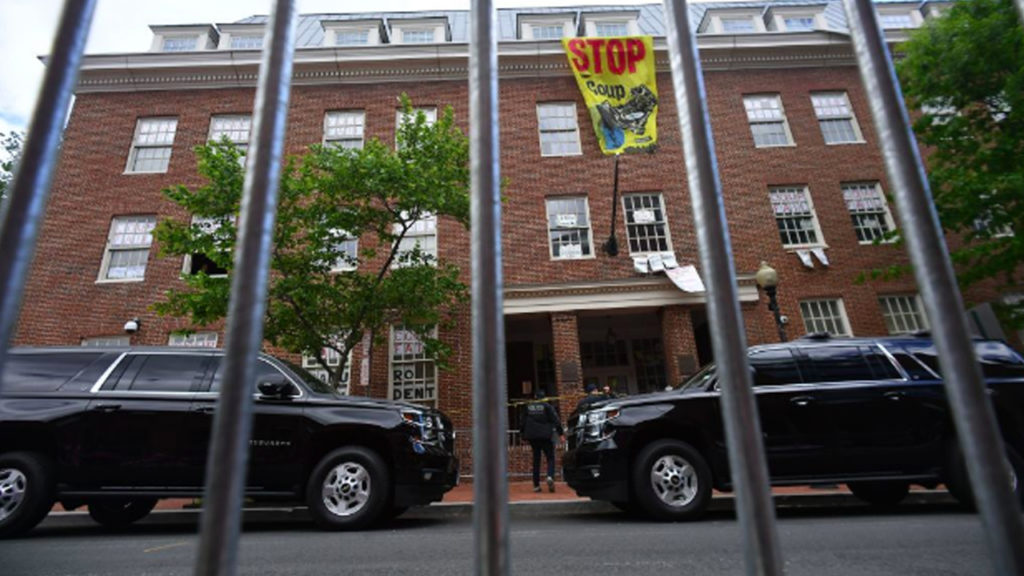 NARRATOR: Around 9:15AM Thursday morning, Washington DC police and US Secret Service agents broke into Venezuela’s embassy in Washington and arrested four activists who had been living there, and are part of the Embassy Protection Collective.

Medea Benjamin, co-founder of the peace group Code Pink, which has been actively involved in the Embassy protection Collective, described the arrests as follows:

MEDEA BENJAMIN: At 9:30 this morning, the police arrived with many police vehicles, with sniffing bomb dogs, with all kinds of paraphernalia that made it look like a war zone, when it was only four peaceful activists inside there as part of the Embassy Protection Collective that has been living inside the embassy for five weeks now. They took them to the police station, where they have been charged preliminarily with interfering with certain functions of an embassy. We don’t know what the final charges will be until they get arraigned tomorrow.

NARRATOR: After the arrests, police officers could be seen clearing the banners that the Embassy Protection Collective had hung on the Embassy façade.

For the previous several weeks leading up to the arrests, protesters supporting the Embassy Protection Collective, including the groups Code Pink, Popular Resistance, and the ANSWER Coalition, held active protests outside the embassy in solidarity with those inside. At the same time, counterdemonstrators who support Guaidó were gathered outside, often assaulting, harassing, and taunting those defending the embassy. They also damaged the embassy’s exterior. Secret Service and DC police clearly took the side of the pro-Guaidó counterdemonstrators. They arrested embassy defenders on several occasions when they tried to deliver food and water to those inside the embassy. The DC power company, PEPCO, shut off electricity to the embassy a week earlier.

Ever since January 23, when Guaidó declared himself to be “interim” President of Venezuela, the Trump administration has claimed that Guaidó is Venezuela’s legitimate president and that his representatives would be considered the legitimate representatives for controlling Venezuela’s US-based assets. The first move in this direction took place last February, when the US government handed over control of the Venezuelan-owned, but US-based oil company Citgo to a Guaidó-appointed management team.

Immediately after the Trump administration recognized Guaidó as president, Venezuela’s actual president, Nicolas Maduro, announced that Venezuela would break diplomatic relations with the United States. Shortly thereafter the US announced that it chose Switzerland to represent US interests in Venezuela. And more recently, Venezuela said it wanted Turkey to represent Venezuelan interests in the US. However, despite extended negotiations, no final deal was reached before US authorities broke into the Venezuelan embassy.

MEDEA BENJAMIN: It is very unclear what the legal status of the embassy is. On the one hand, the U.S. government has obviously recognized Juan Guaidó, and recognized his representative Carlos Vecchio as ambassador, and Gustavo Tarre as the ambassador for the Organization of American States. But it is still not clear that they are going to turn over the embassy to them. There is still a chance that they might keep the embassy empty and continue with the negotiations with the Venezuelan government to try to find a peaceful solution. I am sure they’re being pressured tremendously by the supporters of Guaidó in the United States who have flown in from Miami and other places to be camped out outside this embassy for the past two weeks, and are demanding that the State Department turn it over to Guaidó. On the other hand, there are obviously people in the Trump administration who understand the dangerous precedent that this sets, and the liability it creates for US embassies not just in Caracas, but all over the world, because this is a direct provocation that would normally result in a reciprocal move on the part of the Maduro administration, which would be taking over the US embassy. The US could see that as an act of war, and use it as a justification a US military intervention.

NARRATOR: The day before DC police and Secret Service arrested the embassy protectors, Samuel Moncada, Venezuela’s Ambassador to the United Nations, held a press conference in which he presented the Venezuelan government’s view of the embassy standoff:

SAMUEL MONCADA: This type of situation should be resolved by appointing third states with protecting powers in order to maintain the integrity of the diplomatic headquarters. Article 45 of the Vienna Convention states, even in the case of severance of diplomatic relations, the receiving state shall be obliged to respect and protect the premises of the mission. This is only possible with respect for the principle of immunity; for otherwise, if a government uses its territory and protected agents to occupy and violate the diplomatic offices of other governments, the provisions of the convention would be shattered, and all diplomatic offices in the world would be in danger.

NARRATOR: In this context, Medea Benjamin outlined the Embassy Protection Collective’s plans for the immediate future:

MEDEA BENJAMIN: So this is a critical moment. It could go either way. That’s why we’re calling out all peace-loving forces in the United States to continue to go to the Venezuelan embassy, to continue to demand what is called a ‘protecting power agreement’ at that embassy. We will have rallies this weekend. We will have people coming every day during the weekday from 6:00-8:00PM. And we intend for this to be a rallying cry for people who don’t want war. And we are putting this together with other wars that this administration is either threatening, as in the case of Iran, or is involved in, as in the case of Yemen, to say this is the time we must build up an anti-war movement, stop the orchestration of a US coup in Venezuela, and stop the US from being dragged into yet another war.

NARRATOR: What happens now remains unclear, but the general danger to diplomatic relations, and thus to peace, are greatly increased now.