The chaos in Britain's politics has only intensified in the wake of Theresa May's resignation and the tremendous losses that Conservatives suffered in the European Parliament election. Prof. Leo Panitch analyzes the result

The chaos in Britain's politics has only intensified in the wake of Theresa May's resignation and the tremendous losses that Conservatives suffered in the European Parliament election. Prof. Leo Panitch analyzes the result 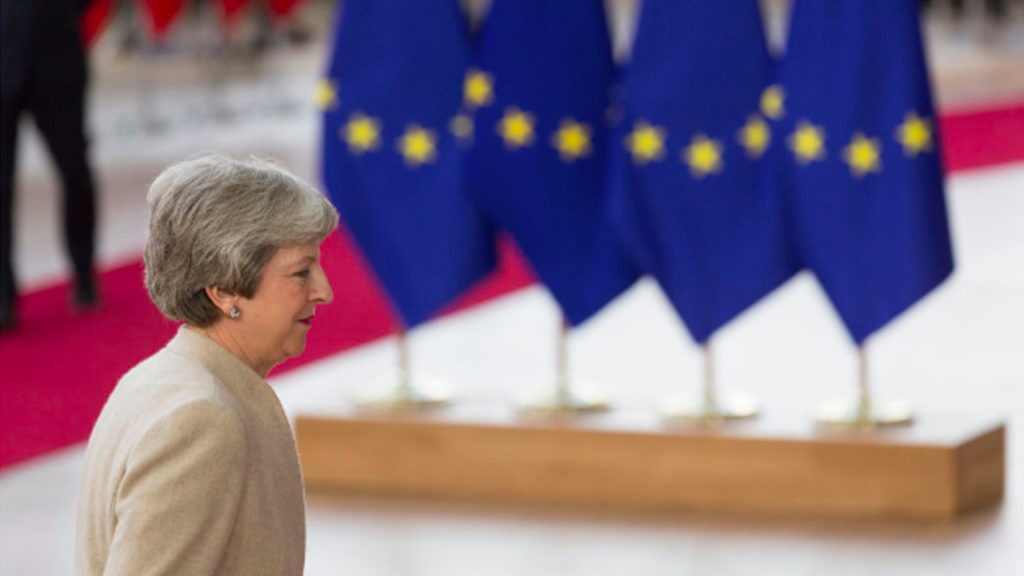 It’s official: Theresa May is stepping down as Britain’s prime minister and leader of the Conservative Party on June 7. There are already eleven declared candidates to succeed her. She announced her resignation amidst the chaos that Brexit, Britain’s decision to exit the European Union, has caused. She spent three years trying to manage the Brexit process, but never managed to get her own party in line to agree on the Brexit deal that she had hammered out with the EU. The deadline for leaving the EU has been extended now from March 29 to October 31 of this year. Here’s what Theresa May had to say about her resignation.

THERESA MAY I am today announcing that I will resign as leader of the Conservative and Unionist Party on Friday the 7th of June so that a successor can be chosen. I will shortly leave the job, that it has been the honor of my life to hold. I do so with no ill will, but with enormous and enduring gratitude to have had the opportunity to serve the country I love.

GREG WILPERT And here’s what the Opposition Leader of the Labour Party, Jeremy Corbyn, had to say.

JEREMY CORBYN Her description of the country is something that I don’t recognize, and I think we’ve got to recognize there is a need for a change of direction in this country. And she’s not offered it. And I’d be very surprised if any of her successors offered it. But the reality is a new Conservative leader isn’t going to solve the problem. There has to be another opportunity for the people of this country to decide who they want to be in their government, how they want the government to be run, what the long-term strategy is of that government. I think we need a general election.

GREG WILPERT Further complicating matters for Brexit and for the government is that European parliamentary elections took place last Sunday, and the Conservative Party lost 15 percentage points in the popular vote. Meanwhile, the anti-EU Brexit party led by Nigel Farage jumped from nothing to 30 percent of the vote.

Joining me now to analyze the state of Britain’s political landscape is Leo Panitch. Leo is senior scholar and professor emeritus of political science at York University. Also, he’s the author of the book The Socialist Challenge Today: Syriza, Sanders, Corbyn. Thanks for joining us today, Leo.

GREG WILPERT So given this political situation, with May’s resignation, the Conservative loss of votes in the EU parliamentary election, and the sizeable win for the new Brexit party, where do you see Brexit heading now? A hard Brexit, since that’s what Farage and some of the potential successors to Theresa May favor?

LEO PANITCH Well, it appears that’s the only way it can go, given that the Tory party will continue to reject the general election, which might be won by Corbyn, who would then try to negotiate, as he’s been proposing, a soft Brexit, a customs union. The closest thing to a single market that would allow for some control over capital and labour flows. Some version of the arrangement that Norway has with Europe, except a little more control over capital labour.

But yes, it would appear that’s the way it’s going, not least because there’s no majority in this existing parliament for a second referendum. Even if Labour were to turn in that direction fully, there’s enough opposition from the Tories that would make it very difficult to get it through, as well as a number of Labour MPs. So it would appear it’s going in that direction. On the other hand, one needs to recognize that after all, the City of London, financial capital, the Confederation of British Industry is, beneath all of these referenda and political maneuvering, still an enormously powerful force in Britain. And they will do all they can to prevent the type of exit from the European Union that would be extremely disruptive.

GREG WILPERT Now, Labour did not do well in this EU election, either. The Labour Party lost 10 percent in the popular vote. Why is that? And what does this mean for Jeremy Corbyn’s approach towards Brexit?

LEO PANITCH Well, what Labor was trying to do, what Corbyn in particular was trying to do, was to put forward a balanced rational response all along. I mean, his position is, you know, I’m seven out of ten for the EU. The EU does have all kinds of problems. It has been a vehicle for US austerity. And it’s precisely the accommodation to that austerity that brought down the Labour centre right, finally, and allowed Corbyn from the left, the socialist left of the party, to take the leadership. He was trying to take a somewhat compromising position on the polarities, which, on the one hand, see the European Union as the best thing since sliced bread, without any problems, and those who are ridiculously blaming the European Union for Britain’s woes and want to establish, even more ridiculously, some throwback to the old British Empire.

So yes, this does appear to be very problematic. That said, it’s very difficult to see a way forward that doesn’t involve trying to replace the toxic air and false polarity of stay in Europe/go out of Europe completely, with instead trying to define the real issues in terms of inequality, class power, the climate crisis, et cetera.

GREG WILPERT Now, what’s next for British politics? Is there a chance that there could be early elections? And does Labour still have a chance of winning them?

LEO PANITCH Well, certainly, the Tories knowing that they’re in such disarray will put them off calling for a new election, especially since by virtue of something that was adopted from Canada’s Harper government less than a decade ago, they don’t now have to have an election even if they lose a vote of confidence in parliament until 2022. That said, if someone like Boris Johnson becomes leader, it is conceivable that enough existing Tory MPs will break from this. Although, you know, they’d be doing so with the danger that they would lose their own seats.

So you know, things are very, very iffy. There is a possibility of a challenge to Corbyn’s leadership from inside the Labour Party, especially from those who are wholly on the side of Remain, and don’t give a damn about the working class vote that has voted repeatedly, first in 2014 European elections, for Farage’s Brexit party then, the UKIP party, and now for his new largely internet party now. So it’s conceivable there’ll be a challenge to Corbyn. And if that were to succeed, that would remove the impetus, the momentum, that the left had in Britain so marvelously in the last three or four years. For the first time there appeared to be a socialist alternative to austerity, neoliberal global capitalism, which virtually nobody on the continent is offering. It’s not as if the EU provides an easy avenue to that, as the Greeks learned to their great cost.

GREG WILPERT What would have to happen, or what would Corbyn have to do, to prevent this kind of a challenge and maintain his position, and then go on to win the general election?

LEO PANITCH This is the very difficult question. Trying to triangulate between those who were enthusiastic about the European Union and those who are xenophobically opposed to it, you know, does not, in an atmosphere of polarization, go over well. Corbyn is not the most charismatic of figures. In fact, his honesty, which endears him to so many people, makes him speak in a way that shows that he doesn’t have his finger in the air for which way the wind is blowing. But when there’s polarization, that leaves someone like him in the political netherworld. He would have to find a way of articulating a clear alternative to a xenophobic, reactionary Brexit in a way that convinces those people who wanted to give a kick to the status quo by voting for Brexit. As he did in the [2017] general election, which focused around the class struggle; for the many, not the few. He would have to be able to articulate that directly in relation to the question of Brexit. And that might involve being prepared to say, look, because the hard Brexit is so reactionary, it’s in your own interests to allow for a second referendum, perhaps with one that allows for three choices: Staying in; the type of softer Brexit that he and more socially progressive one that Labour is advancing under his leadership; or the hard Brexit. At least that could be put forward as a political alternative, even if it doesn’t turn out to be a political reality.

GREG WILPERT OK. Well, we’re going to leave it there for now, but I’m sure we’re going to come back to you very soon. I was speaking to Leo Panitch, senior scholar and professor emeritus of political science at York University. Thanks for joining us today, Leo.

LEO PANITCH Always good to talk to you, Greg.