The US Is Empowering Nazis in Ukraine

The United States is helping Ukrainian neo-Nazis fight against Russia. Ex-Bush administration official turned whistleblower Larry Wilkerson warns this is the most dangerous kind of "the enemy of the enemy is my friend" politics. Ben Norton reports

The United States is helping Ukrainian neo-Nazis fight against Russia. Ex-Bush administration official turned whistleblower Larry Wilkerson warns this is the most dangerous kind of "the enemy of the enemy is my friend" politics. Ben Norton reports 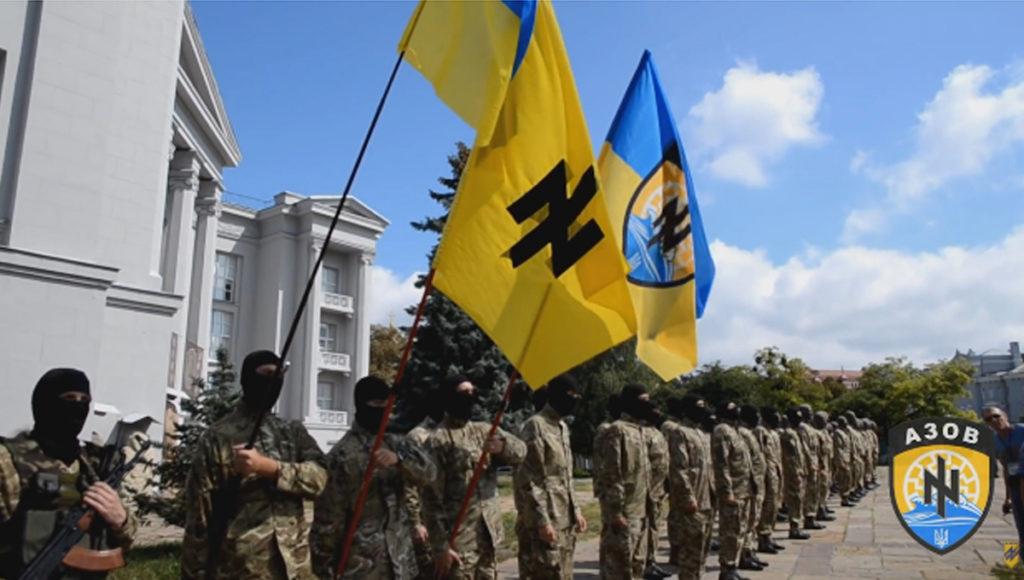 BEN NORTON: Neo-Nazi militias are waging a campaign of terror across Ukraine attacking ethnic minorities, burning down Roma villages, assaulting innocent civilians, solely because of their racial background. And some of these fascist organizations have gotten direct funding from the Ukrainian state. The explicitly white supremacist militia C14 and the extreme-right party Svobota received grants from Ukraine’s Ministry of Youth and Sport.

But it’s not just Kiev that is supporting these dangerous neo-Nazi forces. The United States is also empowering fascists in Ukraine. Journalist Max Blumenthal has reported here at The Real News Network how the U.S. has armed the neo-Nazi Azov Battalion, which is embedded in Ukraine’s national guard and is fighting pro-Russian separatists in Eastern Ukraine. The Azov Battalion has published photos on its website showing its Nazi fighters meeting with American and Canadian military officers.

The Real News spoke with Larry Wilkerson, a former top official in the George W. Bush administration, who has become an outspoken critic of U.S. foreign policy. Wilkerson strongly condemned this bipartisan U.S. policy of supporting far-right extremists in Ukraine in the name of countering Russia.

LARRY WILKERSON: I’ve been looking at this situation, and one of the puzzling things about it is how the United States, beginning with Barack Obama and Hillary Clinton, began, almost like hold my nose and support those who were opposed to the Russians, supporting these Nazi and Nazi-like groups in Ukraine. And elsewhere in Europe, too, but principally in Ukraine at that time. And it was very disturbing to both of us, because we saw that as empowering a group that, at the end of the day, does not need any empowerment in Europe. We’ve been there, done that, seen it, played the ball game. We do not need to be empowering fascists in the heart of Europe. And that’s what we’re doing.

BEN NORTON: In June, the American Foreign Policy Society hosted the Ukrainian fascist Andriy Parubiy inside the U.S. Senate. Parubiy, who previously founded two neo-Nazi organizations, the Social National Party and the Patriot of Ukraine, is now the chair of Ukraine’s parliament, the Rada. The Real News asked Larry Wilkerson why he thinks the United States is supporting such openly extremist political forces. Wilkerson, a retired U.S. Army colonel who was chief of staff to former Secretary of State Colin Powell, said some U.S. politicians simply see Ukrainian far-right extremists as a lesser evil compared to Russia.

LARRY WILKERSON: Again this is sort of a reflection of that ‘the enemy of my enemy is my friend.’ There is this visceral feeling amongst many congressmen, senators and representatives, and it’s deeper with some than with others, that Russia is the bugaboo in the world. And these people still think Russia is the number one threat to this country. Now, it does have nuclear weapons. It does present a threat. We should be talking. I applaud the fact that Putin and Trump are going to sit down in Helsinki on July 16. I don’t think Trump is going to accomplish much, he doesn’t seem to be able to. But I still think we ought to be talking.

So this is what motivates a lot of these people, is they will take any port, any friend, any enemy that hates Russia. Anybody that looks like they’ll be a disciple or a, a soldier in this fight, if you will, [fascists] included, and join with them in order to combat Russia; especially in a place as critical as Ukraine. So I think that’s the absolute wrong way to look at it. But that’s the way they’re looking at it.

And I’ve actually had members of Congress in moments of revelation, if you will, when I was talking about the Yemen war, trying to get us out of that war, talking about how brutal it was, and how we didn’t need to be so close to Saudi Arabia, and for that matter we didn’t need to be so close to fascists in Ukraine either, to come back at me and say, oh no, you don’t understand, this is serious. This is really serious. We’ve got to back those people.