The Origins of Venezuela’s Economic Crisis

Venezuela has become a popular argument against socialism amongst conservatives because of the deep economic crisis it is currently traversing. Defenders of the Bolivarian project, though, say that US sanctions and economic war are to blame for the crisis. Greg Wilpert presents an analysis that tries to take all the factors into account

Venezuela has become a popular argument against socialism amongst conservatives because of the deep economic crisis it is currently traversing. Defenders of the Bolivarian project, though, say that US sanctions and economic war are to blame for the crisis. Greg Wilpert presents an analysis that tries to take all the factors into account 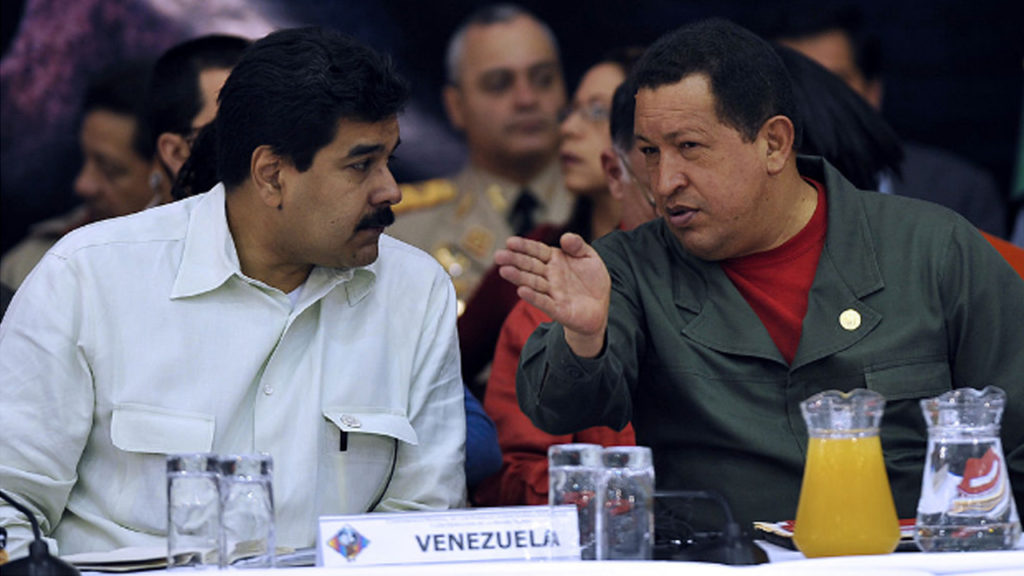 One of the main talking points of the Trump administration and the Venezuelan opposition is that Venezuela is suffering a humanitarian crisis of unprecedented proportions because its economy has collapsed. According to them the reason for the economic crisis and the emigration from Venezuela lies in the effort to build socialism in Venezuela.

DONALD TRUMP: But it’s a very sad thing. We’re not looking for anything other than taking care of a lot of people that are starving and dying in the streets. What’s happening there is a disgrace. This was one of the wealthiest countries in the world, and all of a sudden it’s just, it’s greed-stricken, poverty-stricken. No food, no water, no air conditioning, no anything.

GREG WILPERT: Leaving aside the question of whether the situation deserves to be called a humanitarian crisis, something former UN Special Rapporteur Alfred de Zayas has disputed, what is undisputed is that there is an economic crisis in Venezuela. Exactly how did this economic, crisis with its hyperinflation and shortages, come about? Whose fault is it? And is socialism to blame? And can Venezuela get out of this economic crisis?

Before we examine Venezuela’s economic performance during the Maduro presidency, it makes sense to take a brief look at the time before Maduro took office. Ever since the 20th century, Venezuela has been a major oil exporting country. As a matter of fact, in 1920 Venezuela was the world’s largest oil exporter. Middle Eastern oil production did not exceed Venezuela’s until the 1960s. Just like today, already back then oil exports made up over 90 percent of Venezuela’s export revenues. As a result, all other forms of economic production, such as agriculture, dropped to a very small fraction of the country’s economic activity. As long as oil prices rose, which they did fairly consistently until the late 1970s, Venezuela’s economy grew in tandem with rising oil prices. The economy boomed when oil prices quadrupled uring the 1978 OPEC oil embargo.

However, little by little, oil prices began to enter a phase of instability and even decline, dropping below $10 per barrel in 1998, the year that Chavez was elected president of Venezuela. Along with this oil price instability, Venezuela’s economy also lurched from one crisis to the next. This provided the background for Hugo Chavez’s election in 1998. Venezuelans were fed up with the economic uncertainty and consistent decline. Real per capita GDP had dropped by 27 percent in the 20 years between 1979 and 1999. Meanwhile, poverty rose from 15 percent to over 65 percent. Chavez’s first move on the economic front was to raise oil prices. He toured OPEC member countries and convoked the second ever summit of OPEC heads of state in Caracas in late 2000 to convince OPEC members to adhere to oil production quotas and raise oil prices. Gradually oil prices rose, with an additional boost due to the Iraq war in 2003. Oil prices continued to rise steadily throughout this period, reaching a high of $140 per barrel before the Lehman Brothers collapse and the global financial crisis of 2008. Similarly, Venezuela’s economy boomed and per capita GDP rose steadily, increasing by 35 percent, and poverty dropped by half from 54 percent to 27 percent of households between 2003 and 2007.

Ultimately, though, these efforts at diversification failed. They failed for two closely related reasons. First, ever since 2003, the government implemented a fixed exchange rate in order to control capital flight and the depreciation of its currency, and also as a means of subsidizing essential goods by allowing importers of things like food and medicine to have access to cheap dollars. The fixed exchange rate system worked reasonably well as long as there were enough dollars coming into the economy. However, when the price of oil began to decline, first in 2008 and then again in 2014, the government reduced its subsidies for the purchase of dollars at the official rate and thereby for imports. This meant that imports went down and their prices went up, heating up inflation. The government tried to maintain low prices by holding on to the fixed exchange rate, and by introducing stricter price controls. But black market activity circumvented these policies, leading to more inflation, more price distortions, and countless opportunities for corruption.

Immediately following President Chavez’s death from cancer in March 2013, the pressure on the currency in the form of the black market exchange rate took another hit. The gap between the official exchange rate and the black market exchange rate began to increase to unprecedented levels, further exacerbating inflation, corruption, and shortages. When oil prices declined during Maduro’s first year in office, reducing imports, this vicious cycle intensified yet again. Maduro tried to adjust his economic policies periodically by adjusting the official exchange rate slightly, but the gap between the official exchange rate and the black market rate continued to grow, so that a dollar purchased at the official rate eventually cost merely 1/100 of what it cost in the black market. Then in 2015 President Obama declared Venezuela to be an “unusual and extraordinary threat to the national security of the United States,” allowing him to impose targeted sanctions against individual government officials that the U.S. accused of being involved in drug trafficking or corruption. These sanctions, although they were targeted on individuals, began a cascade of financial restrictions on Venezuelan financial transactions and of bank accounts, leading to closings of accounts, making imports and financial transactions increasingly difficult for the government.

In August 2017, President Trump drastically intensified the sanctions by prohibiting U.S. institutions and individuals from trading in Venezuelan debt. This made it impossible for Venezuela to restructure its debt, and further restricted the governments ability to engage in international trade. It was no coincidence that Venezuela’s oil production began to plummet at the same time that the Trump administration sanctions took effect. Venezuela’s oil industry depends on crucial replacement parts and oil derivatives from the U.S., which it could no longer import. As a result Venezuelan oil production decreased from about 2 million barrels per day to 1.2 million between August 2017 and August 2018. The rapid decline in oil revenues from $93.6 billion in 2012 to $30.9 billion in 2018 led to a rapid decline in imports. Imports practically also nosedived from $66 billion in 2012 to $11 billion in 2018. This decline in imports, along with the smuggling of its massively subsidized products to neighboring Brazil and Colombia, inevitably meant that there were shortages of food and medicines.

By late 2017 shortages and inflation had gotten so bad that hyperinflation set in. Inflation kept rising as a result of the vicious cycle of the ever-growing gap between the official exchange rate and the black market exchange rate. Since more and more products were imported without subsidies, Venezuelans were thus forced into a position of spending their money the instant they earned it, so as to make sure that it did not lose any value while they had it on hand. Some economists estimate that revenues that Venezuela lost as a result of the decline in oil production are estimated to have been at least $6 billion per year. In addition, the sanctions have prevented Venezuela from repatriating $1 billion of dividends per year from its U.S.-based oil company CITGO. The Venezuelan government now estimates that the total losses in revenue to the government over the past four years due to sanctions amount to at least $30 billion. The lost revenues due to sanctions, the declining price of oil, and the hyperinflation created a perfect economic storm that contributed to a dramatic contraction of Venezuela’s economy. By 2017, per capita GDP had declined by 2/3 relative to its level in 2012.

The big question at this point that remains is whether Chavez and Maduro could have handled the economy differently so that it would not be in the terrible shape it is now. This question is difficult to answer, but there are perhaps three interrelated macroeconomic issues that Chavez failed to tackle during his presidency. First, as many have argued, Chavez failed to wean Venezuela off of oil. However, as mentioned earlier, this is not for lack of trying. Chavez invested billions in a wide variety of efforts to increase oil derivatives, manufacturing, and agriculture production. However, what economists call the ‘Dutch disease’ took hold, whereby domestic currency was overvalued, and these new facilities could not compete with far cheaper imports, thus making them uneconomic.

Second, Chavez did not take oil price volatility into account. Actually, in the beginning of his presidency Chavez did consider volatility to be a problem and supported the creation of a sovereign wealth fund called the Macroeconomic Investment and Stabilization Fund. It was designed to set aside funds for when the price of oil was high, and allowed the government to draw on it when the price was low, thus evening out the flow of oil revenues. However, following the oil industry shutdown in 2003, when revenues were extremely scarce and the price of oil began to rise rapidly, oil industry economists began speculating about peak oil and the inevitability of a decline in oil production. Estimates were circulating at the time that the price of oil would soon reach $200 per barrel. Chavez dismantled the fund, believing it was no longer needed.

Third, also following the 2003 oil industry shutdown, Chavez introduced a rigorously controlled fixed exchange rate. This was no doubt necessary at the time because of the run on the Venezuelan currency, the Bolivar, in the aftermath of the 2002 coup attempt and the shutdown of the oil industry in 2003. As long as the oil revenues flowed and kept increasing, it was relatively easy to maintain this fixed exchange rate. However, by 2013 when Chavez died, the gap between the official rate and the black market rate had grown so large that an adjustment would have meant major economic dislocations, With which Maduro was unwilling, and politically perhaps unable, to risk.

Finally, we cannot leave out the impact of the sanctions. As mentioned earlier, their effect has been devastating. But they are not the cause of the onset of the economic crisis. Rather, the roots of the crisis can be found in massive capital flight and the related effort to maintain a fixed but overvalued exchange rate. Inaction in the face of ever-growing price distortions and price differences between Venezuela and its neighbors, and an inability to overcome the structural obstacles for diversifying the economy, the sanctions have now made a bad situation far worse, and on top of it have made it almost impossible for the government to take corrective action, because it lacks the resources to do so.

This Greg Wilpert for The Real News Network. Thanks for joining us.