A closer look at Fox News reporting reveals that the narrative espoused by President Trump that Baltimore is, "rat and rodent infested" is complicated by people from outside of Baltimore using the city as their dumping ground.

A closer look at Fox News reporting reveals that the narrative espoused by President Trump that Baltimore is, "rat and rodent infested" is complicated by people from outside of Baltimore using the city as their dumping ground. 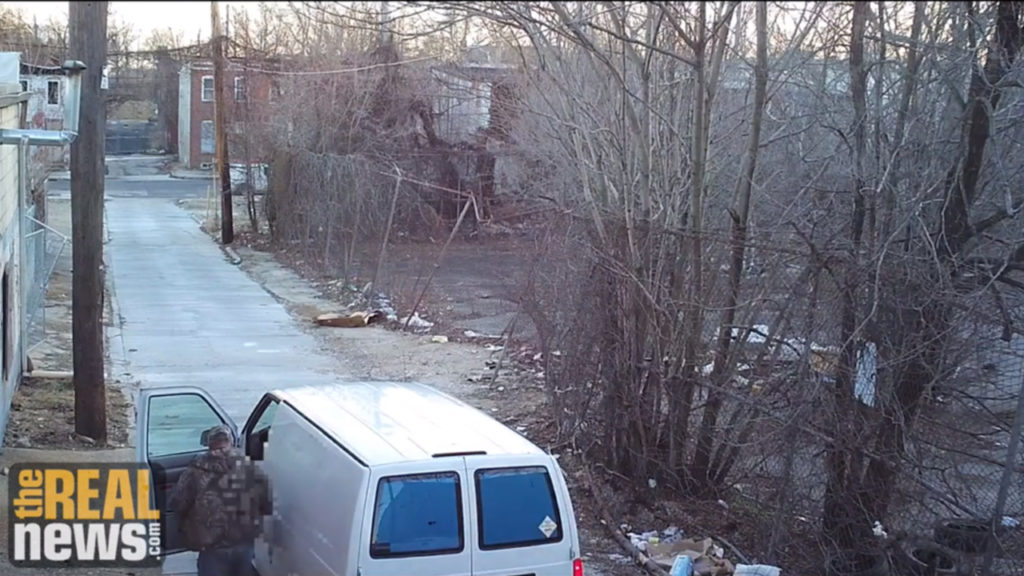 TAYA GRAHAM: This is Taya Graham reporting for The Real News Network in Baltimore City, Maryland. Fox News attacked the City of Baltimore with an oversimplified narrative of dysfunction, rats and trash. But we took a closer look at their reporting, and what we found speaks volumes about why America’s most-watched network distorts the truth.

This is a video obtained by The Real News that Fox News and their contributors don’t want you to see. According to the Baltimore Department of Housing and Community Development, it shows residents from the surrounding county, caught on camera illegally dumping a boat in the city. It’s just one example of a much larger problem. People coming from outside jurisdictions to unload trash and waste in defiance of the law.

BALTIMORE RESIDENT: We do have that and we’ve caught people in the past that have illegally dumped from other jurisdictions in the surrounding area.

TAYA GRAHAM: It’s an issue that consumes resources and time for Councilman Kristerfer Burnett whose district lies on the city county line.

COUNCILMAN KRISTERFER BURNETT: I spend a lot of time doing it. It can be the bane of my existence from time to time. It’s such a pervasive issue in Baltimore, especially in West Baltimore. I’ve had to dedicate two days a week to doing site visits, neighborhood walks, alley walks. Sometimes if I don’t have a neighborhood that’s coming with me, we go out to just circulate through hotspots.

TAYA GRAHAM: But also contradicts the narrative gleaned from this brief video clip of trash used by both Fox News and Donald Trump to label Baltimore as a failed city. The president used the footage re-tweeting the images to slam Baltimore as dysfunctional. But like many of Trump’s rhetorical attacks and much of the material that fuels Fox News, it overlooks and ignores the complex realities and contradictions this simplistic narrative elicits. And in fact, deliberately obscures how the racism touted by Trump, and his policies of economic inequality, make crumbling cities possible.

I’m standing on an imaginary line that has real life consequences. This is where Baltimore City ends and Baltimore County, home of Kimberly Klacik begins.

Taya Graham: Klacik, a Fox News contributor who lives in Baltimore County, used these images to argue Baltimore City is a mess and it’s our fault because we elected the wrong leaders. But her distinction ignores a more complex and racially fraught relationship. That’s because Baltimore is one of only three cities in the country that is not connected to the surrounding county— a break that isolated the city economically and extended Baltimore’s historic use of segregation law.

SPEAKER: So finally, by constitutional convention in 1851, the state put the city and the county in two different judicial districts and that was what brought about the separation. So Baltimore— I think one other city, St. Louis, is in the same position— is a free-standing city, which has some real disadvantages because it means the county, where there are a lot of prosperous communities, has no responsibility for the city, no direct responsibility, and the city has no access to county resources.

TAYA GRAHAM: A break that isolated the city economically and extended Baltimore’s historic use of segregation laws. In fact, it was white flight and the wealth that followed, that left Baltimore with failing infrastructure and underfunded schools. And it was the evolution of racist police strategies— like zero tolerance, which the Department of Justice found was unconstitutional— which further aggravated the city’s social ills.

BALTIMORE RESIDENT: In everyone, it’s 40, 50 eviction orders on people’s doors and everybody around here works.

TAYA GRAHAM: But even in Klacik’s county, Trump officials are making lives more difficult for the residents by profiting off it. This is one of nearly a dozen apartment complexes owned by Trump’s son-in-law, Jared Kushner. In 2017, tenants filed a class action lawsuit alleging his company was using unpaid late fees to start evictions, and allowing unsanitary conditions to fester.

TAYA GRAHAM: We reached out to Klacik on Twitter for comment. In summary, she responded that Baltimore City is poorly managed, and that reporters are behind the ball on these issues. For now, city officials say they will continue to spend resources battling the flow of trash from outsiders and hoping that their efforts will not be in vain.

COUNCILMAN KRISTERFER BURNETT: You know, I imagine they drive into a place that’s pretty clean and pretty safe after they’re done dumping in our communities. It’s problematic and, like I said, the narrative that we’ve seen in the national media over the last few weeks isn’t fair.