Syria and Turkey are fighting each other in the rebel-controlled Idlib region, forcing hundreds of thousands to flee for their lives as the bombings intensify.

Syria and Turkey are fighting each other in the rebel-controlled Idlib region, forcing hundreds of thousands to flee for their lives as the bombings intensify. 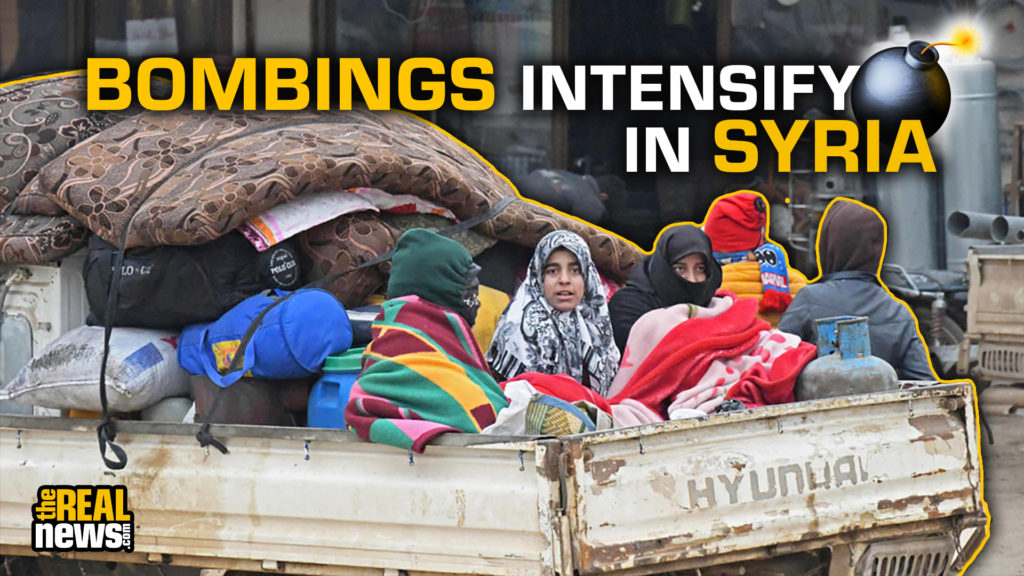 Greg Wilpert: It’s the Real News Network. I’m Greg Wilpert in Baltimore. War is escalating in Idlib Province of Northwestern Syria. Recent reports say that over 700,000 people were displaced from their homes due to conflict between Syrian and Turkish forces, which has garnered some attention in global media outlets. Both the Syrian government headed by President Bashar al-Assad and Turkey, headed by President Recep Erdoğan are allied with Russia. Now that they’re directly fighting each other though, it seems that the contradictions in Russia’s Syria policy has strained to their breaking point. Meanwhile, in Turkey, President Erdoğan is fanning the flames of war.

Speaker 3: By the end of February, we are determined to push the regime forces to the lines of the Sochi agreement to beyond our observation posts. We will do this by any means necessary by air or ground. Without hesitating, without stalling.

Speaker 3: If there’s the smallest injury to our soldiers on the observation posts or other places, I am declaring from here that we will hit the regime forces wherever from today, regardless of the lines of the Sochi agreement or Idlib.

Greg Wilpert: Joining me now to analyze the latest developments in the war between Syria and Turkey is Baris Karaagac. He is a lecturer in International Development studies at Trent University in Ontario, Canada and he is also the editor of the book Accumulations, Crises, and Struggles: Capital and Labor in Contemporary Capitalism. Thanks for joining us again, Baris.

Baris: Thanks for having me, Greg.

Greg Wilpert: So the rebel forces in… have held Idlib actually since the beginning of the Syrian Civil War, but recently Syrian forces killed at least five Turkish soldiers in Idlib. Now, how did it happen that outright fighting between the Turkish and the Syrian military in Idlib became possible and that it has received barely any media attention so far?

Baris: First of all, I would like to say a couple of things about the so-called rebel forces. Yes, the rebel forces that are in control over most of the province, including the town of Idlib. But I think it’s important to tell our viewers who these rebel forces are. The most powerful organization on the ground, in Idlib is called the Hayat Tahrir al Sham, which is a coalition actually of a number of jihadist organizations, but the most powerful, the most prominent one within that coalition is Al Qaeda [inaudible 00:02:44] Syria. So I think it is important to keep that in mind when we’re talking about these soils… these rebel forces that are operating in Idlib. And secondly, Idlib province was supposed to be one of the four demilitarized originally zones in Syria and then in 2018 there was the Sochi Accord, according to which a zone would be become demilitarized between the rebel forces and the Syrian military.

And there would be a ceasefire. However, last year Syrian government with the support of Russia has started to start an operation in Idlib. And now every day, it’s increasingly, it controls a larger part of this province that includes the 12 observation posts. It’s the setup by Turkish military in the province. So some of now the these observation posts are in those spaces in that territory that is controlled by Syrian Army with the backing of Russians and this week… Last week eight Turks were killed by the Syrian forces. Seven of them were military people and one a civilian. This took place during the arrival of the reinforcements from Turkey to support the already existing Turkish military presence in the Idlib province. Now every day we hear these threats, especially coming from Tayyip Erdogan directed at the Syrian government, but also extending to Russian forces on the ground. But what is more concerning is that his threats towards the Syrian force, of course, because I don’t see it as a likely development the confrontation between the Turkish military and the Russians in Syria.

Greg Wilpert: Hmm. Now, president Assad has made it… made no secret that he plans to retake all of the rebel controlled territory in Syria. And that his focus on Idlib is a direct result actually of being blocked along the banks of the Euphrates River by Russian forces. And as you said, it’s unlikely that they’re going to confront them. So the question remains, what is the other one trying to achieve in Idlib and is it worth sacrificing his alliance with Russia?

Baris: Well, first of all, I think this indicates a bankruptcy of Turkish foreign policy regarding Syria. Before the uprisings began in the Arab world and then spread into Syria and Assad and Tayyip Erdogan used to be buddies. They even organize the vacation, so on and so forth. And then when the uprising began in Syria, Tayyip Erdogan bet on the opposition and his goal was to extend his as well as the Turkish influence over the greater part of the Middle East, especially over the Sunni territories. But this has completely gone bankrupt. And then what is happening in Idlib and other parts of Syria. In the recent years it show this very clearly, but when it comes to domestic politics, Idlib has played and will I think continue to play an important role because in Turkey Tayyip Erdogan’s party, the AKP has been in power for a long time. Recently, it has been in need of the support of the ultra nationalists, or if you will, the neo-fascists at MHP in order to stay in power and implement a number of policies without the interference of the opposition.

So what has been happening in Idlib, especially with the Turkish military people getting killed as important, the consequences is that within Turkey, in terms of immobilizing the nationalists, the vote and consolidating the nationalists, the electorates behind Erdogan. Turkey has been going through a very severe, actually as an economic crisis. There have been a number of failures when it comes to foreign policy and sooner the policy regarding Libya will be one of a failure. I’m almost certain about it, but it, when it comes to within the borders of Turkey, Idlib has and will play an important role for Erdogan to consolidate his power base, which has weakened in the past couple of years.

Greg Wilpert: I want to turn to the United… the role of the United States in all of this. Do you think it’s fair to say that the sudden withdrawal of US troops from the region has actually contributed to this escalation? And if so, what interests did the US withdrawal serve or is it perhaps in the interest of the US to keep the war in Syria going and to tie up serious allies that is Russia and Iran in Syria?

Baris: Well, of course the withdrawal of the US troops in 2019 contributed significantly to this outcome. Now the most powerful power broker in the country is definitely Russia. So Russia calls the shots to a great extent and I think it will call the shots in the near future as well. Turkey cannot take action against Russia. Turkey is dependent on this country for natural gas. And then recently TurkStream became effective operating and Turkey has bought S-400 air defense, a system from Russia instead of the Patriot from the United States. And also there’s a trade volume between 20 and 25 billion dollars between the two countries. So Turkey cannot, Turkey will not dare confront Russia on the ground despite all these threats and machismo coming from Tayyip Erdogan. But now what is interesting is that there was an meeting between the Turkish and US officials yesterday and Turkey is seeking the assistance of the United States in Syria. But at this point, I don’t see anything coming out of this that will change the outcome or the ongoing that… the outcome of the ongoing process in the Northern part of the country.

Greg Wilpert: Okay. Well we’re going to continue to follow this situation, but we’ll leave it there for now. I was speaking to Baris Karaagac, lecturer in International Development studies of Trent University. Thanks again Baris for having joined us today.

Baris: Thanks for… Thanks for having me. It’s always a pleasure