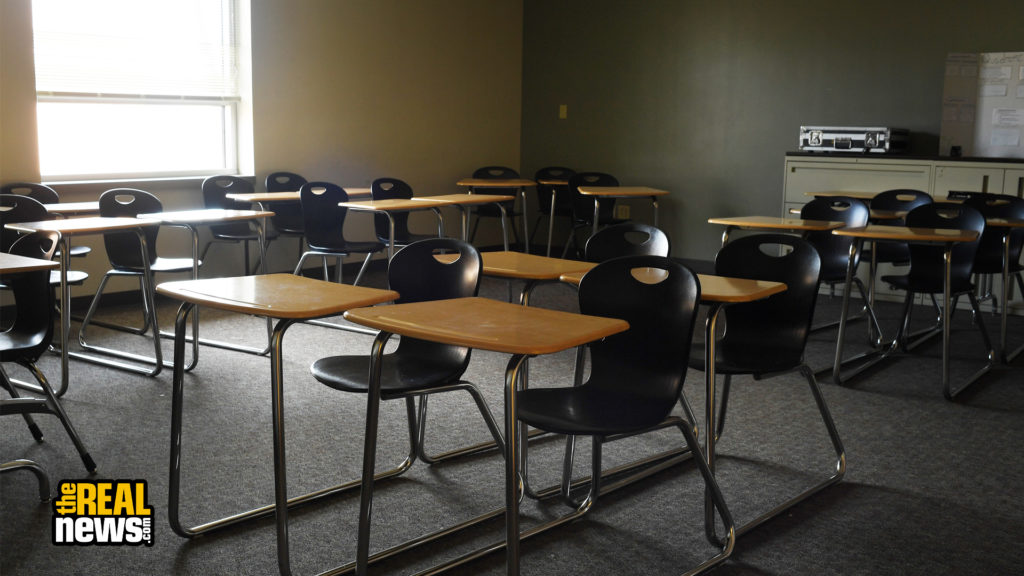 Jaisal Noor: Welcome to The Real News. I’m Jaisal Noor. With schools closed due to COVID-19, teaching that was once done in a classroom has been moved online. This transition poses special challenges in districts where public policy has created wealth and opportunity gaps across racial and class lines. Nationally, approximately 4 in 10 low income, African American and Latino households lack broadband access, according to Pew Research, and over 40% of Baltimore City households lack broadband internet access, and one in three didn’t have access to a computer at home, a new May 2020 report found. Now joining us to discuss this is Franca [Mollerpaz 00:00:45]. She’s a teacher in Baltimore City and a member of the Baltimore Teachers’ Union, and Kimberly Vasquez, a student and a member of SOMOS, a student group here in Baltimore. Thank you both for joining us.

Jaisal Noor: So Kimberly, I wanted to start with you. Talk about how this switch to virtual online learning has impacted you and impacted your classmates.

Kimberly Vasque…: This has impacted me because now I find myself having to use the internet much more. And personally, my family has the Internet Essentials package that Comcast provides and the package offers that’s 25 megabytes per second with upload speed and the download speed is three megabytes per second, which is honestly really low when it comes to video conferencing. And I always get shut off just because the bandwidth isn’t strong enough for my laptop. And I also know that other colleagues have been using hotspot in order to complete homework assignments.

Jaisal Noor: And Franca, So you’re a teacher in Baltimore City. How has this impacted what you do on a daily basis?

Franca Mollerpa…: Yeah, I think it’s really important to know that these were things that were affecting students all the time. So this was always something that was impacting students and you can really see the breakdowns by race. So we knew that White students had greater access to broadband internet, greater than Black and Hispanic students in the city. But at the time, before coronavirus and these shutdowns, I teach at Baltimore city college, I’ve been teaching for 10 years, and we were able to use our library, the resources we had, to really ensure that students were going to be able to do the work that they needed to do. But now that they don’t have the access to that, or even public libraries to be able to use, that means everything’s relying on their home infrastructure. And what that looks like is that I’ll hold a digital classroom with a handful of students in it.

Students who were incredibly committed to school, always working really hard on their assignments, would never miss a day, have fallen off the face of the planet for now. And I haven’t seen them in weeks. And that is really, really scary when you’re thinking these are students who really, really want to be engaged and yet where are they? Also, recently the ESAL office released some data around dropouts, especially impacting ESAL students.

Jaisal Noor: And those are students where English as their second language?

Franca Mollerpa…: Exactly. So students who are learning English, they’re immigrant students, or at least those that are in high school are usually immigrant students, and they have almost one in two drop out rates already. So now if we’re thinking about all of these students that we know are very disconnected from broadband it puts really the fear in me and the community of how many students are we losing each day that we’re never going to get back? And I think that is really, really frightening when we’re thinking about what are going to be the consequences of that in the future.

Jaisal Noor: And what you just described is especially important in a district like Baltimore where enrollment is declining overall but the population of speakers that aren’t English native speakers are one of the few populations that are actually rising. So that is something that the district needs to take very seriously. So Kimberly talk about what kind of things you’ve been doing at home to help adapt these challenges you face now?

Kimberly Vasque…: Well, as you may know, SOMOS is in a group called The Digital Equity Coalition, and this was made up from 70 plus organizations, students, and teachers. And also, I want to thank Councilman Zee Cohen and City Council President Brandon Scott for their continuous support through this fight to get internet access to families who are in need. Through this coalition and testimonies, including mine and a fellow colleague of mine, Sashir [Amoreo 00:00:05:34], our Mayor Jackie Young approved $3 million from the Youth fund to provide internet access and devices to students in the city. Baltimore schools has been giving out their own school devices, as well as even purchased 12,200 devices from the $3 million we’ve received, which I think is really impactful because I know many students who only have one device but they have three siblings or sometimes even more so it becomes into a challenge of who has priority over their schoolwork, as well as when it comes to parents and they’re working at home, do you prioritize the parent who needs to provide for their family or the student who has to pass their classes?

Jaisal Noor: And Franca, we know that even before, something you alluded to even before the pandemic, there was a huge deficit in the funding that Baltimore City got. It was something like $4 billion over the past couple of decades. As an educator, are you worried that the pandemic is going to exacerbate the existing gap between the have and have nots?

Franca Mollerpa…: I think there’s no doubt that that’s going to take place and we’ve all been doing the best we can to try to help families sort of get through this period of time and help get students online. It does mean, alluding to what Kimberly just said, schools have handed out every piece of technology that they could give to students to help get them online. And so whenever school resume again, all these schools that also had a technological deficit, schools that are functioning with three laptop cards, having to do all this online testing that takes them months because they have only three cards of computers to get things done. All of those reserves of electronics are going to be seriously depleted and so we need to be thinking what’s going to happen with schools when we resume to make sure we’re supporting them and acknowledging the work and sacrifice that they made for families, but then making sure that we’re helping to get them back online.

Jaisal Noor: And Kimberly, let’s end with you. So right now in Washington, D.C., Senators are considering a bill called The Heroes Act, which right now the House version has $4 billion to expand broadband across the country for families that can’t afford it. What is your message to policy makers, to lawmakers, that have a chance to sign this into law right now? Do you think that they should support this? Why or why not?

Kimberly Vasque…: Yes. I think that they should support this because many students are relying, not even students, a lot of people through this pandemic are relying on internet access. And I think having access to the internet right now could honestly impact how a student takes into consideration school, especially if the access isn’t easy, then it might disencourage a lot of people. And I don’t want to see more dropout rates in our city, especially since it’s a high poverty rate city. I know Baltimore City isn’t the only city struggling with this and I really want for there to be a change, especially since the United Nations stated that internet is a basic human right in one of their reports.

Jaisal Noor: And we know a lot of countries guarantee internet access or are working to build towards that, and like so many other things, the United States is far behind in ensuring those basic rights. I want to thank you both for joining us. Franca Mollerpaz is a teacher in Baltimore City. Kimberly Vasquez is a student and a member of SOMOS, a student group that has been working to raise money and to get money into Baltimore City schools and especially to help bridge this divide when it comes to access for technology. Thank you both for joining us.