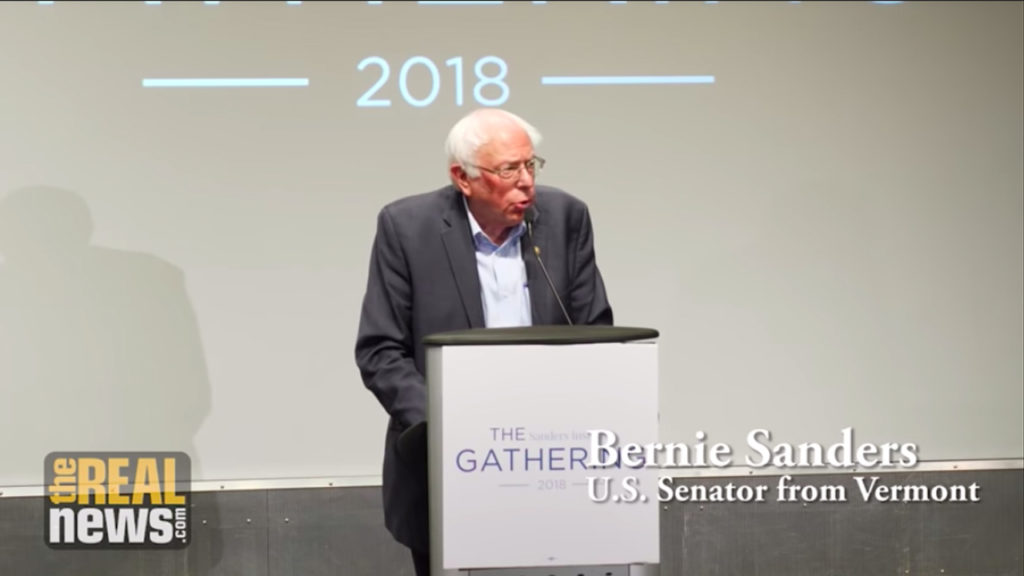 DR. CORNEL WEST: We are here because there’s too many folks suffering.

BERNIE SANDERS: At the end of the day, our vision is a world that works for all the children of this world, not for a handful of billionaires.

JAISAL NOOR: The conference is bringing together progressives from across the United States and Europe to help build a movement to fight for climate justice, against racism, for a more fair economy, immigration reform, and much more.

In his introduction to Senator Sanders, Cornel West highlighted the advancement of a bill in the U.S. Senate that would end U.S. backing for the Saudi-led war in Yemen.

DR. CORNEL WEST: Look what he did yesterday in terms of our brothers and sisters in Yemen. True. And you have to keep in mind. It was not just a critique of the vicious despotism of the elites in Saudi Arabia. It was his love for the people in Yemen. We don’t like to keep the focus on the folks when they’re down and out. Sometimes you have to have a death of a brother who is a journalist. We love Jamal. But the death of a journalist all of a sudden becomes a catalyst. Folk in Yemen have been catching hell for years.

BERNIE SANDERS: Turns out that in the last three years because of the Saudi-led invasion and intervention in that civil war, 85,000 children have died of starvation. According to the United Nations, millions of people are on the brink of starvation. Nobody in America knew that. But it turns out that when you start talking about that issue–and Cornel was right. Everyone’s worried about one journalist. What a terrible tragedy that was. But what about the 85,000 children who starved to death? Maybe that’s a tragedy, as well.

JAISAL NOOR: Sanders did not announce if he was running in 2020. Rather, he struck a familiar theme, talking about income inequality.

BERNIE SANDERS: The moral issue–Cornel and others put morality into the political debate. Is it appropriate that three billionaires own more wealth than the bottom half of the American people?

BERNIE SANDERS: It is an issue all across this country, including the city that you’re in right now. And people, young people, often working people, cannot find decent housing. Maybe it’s time we started talking about building the millions of units of affordable housing that we need in this country.

JAISAL NOOR: Medicare for All, which polls show a majority of Americans support.

BERNIE SANDERS: Poll after poll shows that the American people are in a very different place than Donald Trump. 88.0 percent of the American people think we should provide legal protection to the 1.8 million young people in the DACA program, or eligible for DACA. We’re seeing some progress in taking on the outrageous level of voter suppression and gerrymandering. But clearly if we’re going to create the country we know we have to create, we have to take on not only a corrupt campaign finance system but a corrupt election system as well. We’re here this weekend to be talking about racial and social justice. We’re here to be talking about ending in all of its many and varied forms institutional racism.

JAISAL NOOR: And the urgent need to curb reliance on fossil fuels.

BERNIE SANDERS: All of you are familiar with the two reports that have come out in the last month regarding climate change. The Intergovernmental Panel on Climate Change, probably the most comprehensive study ever done, talks about the fact that we have 12 years, which is no time at all, to transform our energy system away from fossil fuel, or we’re going to see irreparable harm done to this planet.

JAISAL NOOR: The Real News will be here at the Sanders Institute Gathering all weekend, talking to panelists and attendees. Go to TheRealNews.com for all of our coverage. From Vermont, this is Jaisal Noor.