Sanders vs Clinton on Climate Change

PERI Director Robert Pollin says that while Sanders is more likely to take on the fossil fuel industry, neither he nor Clinton go far enough

PERI Director Robert Pollin says that while Sanders is more likely to take on the fossil fuel industry, neither he nor Clinton go far enough 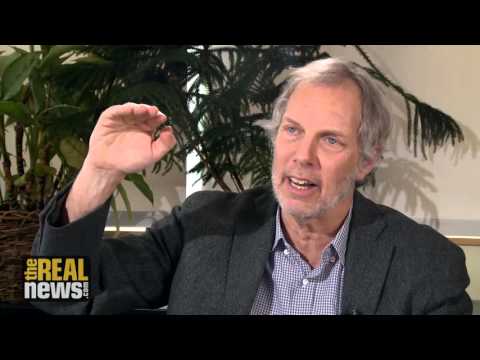 Well, just a few days ago, Bernie Sanders made a big breakthrough in New Hampshire. And as everyone is saying, exceeded expectations. In fact, it all became about expectations once the polling showed that he was 15 points ahead. It turns out he wins in the end by something like around 20-21 points, which is a big break through, and changes the whole conversation about the Democratic party race. And the issues of economic inequality, the issues of democratizing political revolution, all these things are now going to be talked about on mainstream television.

But one thing that Bernie Sanders is talking about but has not emerged as a front and center issue in the campaign, and one wonders why, when even Bernie Sanders says it’s the number one thing that’s a threat to national security, and that’s climate change. But climate change actually isn’t that big a debate between Hillary Clinton and Bernie Sanders. And we’re going to talk about why that is, and we’re also going to begin to talk about what the plan should be, that if someone really wants to address these questions as president, what would their climate change energy plan look like?

So now joining us from the PERI Institute is Bob Pollin. Thanks for joining us, Bob.

ROBERT POLLIN: Thank you very much for having me, Paul.

JAY: And Bob is the co-director and founder of the PERI Institute.

So Bob, first of all, are you a little surprised that this isn’t being made more an issue of climate change? I mean, if you believe the science it’s apocalyptic in terms of the possible consequences. As I said, Bernie Sanders has, does highlight it in every speech. But it’s not front and center in the campaign.

POLLIN: Bernie, in his victory speech did give it attention, and he said, which I was very happy to hear, we can get into this more, that we need to focus A, on raising energy efficiency standards, and also invest in renewable energy. In her concession speech Hillary Clinton also said she’s going to fight for clean energy investments and clean energy jobs. So at least in this kind of very general framing there is not that much difference between what they say. I mean, in my view the difference is who is really going to be aggressive in implementing this, and who is going to recognize fully the potential, the benefits that would accrue to working people throughout the country, if you pursue a program that is going to be aggressive in investments and promoting job creation in the green sector.

JAY: So back up just a bit. It’s not that long ago all the leaders of the world more or less show up in Paris, and they have a declaration, yes, climate change is real and we’re going to have to hit significant targets. And that’s kind of now all faded away, certainly not talked about in the election campaign. And frankly, even what was agreed to in Paris wasn’t binding. So it’s really a question, you know, how significant it will turn out to be.

But take us back to the end that, those days in Paris. What was decided and how should this be impacting the presidential elections, even if it’s not?

POLLIN: The Paris agreement was historic, as people said, in the sense that they got 192 countries to agree that climate change is a severe threat to life on earth, and to our capacity to sustain life on earth. So they got everyone to agree to that. They also got countries to commit to reducing emissions for the first time. These were not, as you said, these were not binding emissions. But we got the United States, we got Europe, we got Japan, crucially we got China, and we got India to commit to emission stabilization and emission reduction. Good. So far so good.

However, the things to which countries agreed are not nearly adequate. Not close to being adequate to achieve even the most modest level of emission reduction necessary to stabilize the climate in a way that the Intergovernmental Panel on Climate Change says is necessary. And other people say even the IPCC standard is too low. In fact, one of the things that came out of the, the Paris conference, it has long been held by climate scientists that we have to reduce emissions, that we have to stabilize temperatures at 2 degrees Celsius above pre-industrial levels.

POLLIN: Yeah. And out of Paris they said, well, actually it should be closer to 1.5 degrees, which is a big difference.

JAY: Which is a much more aggressive–.

POLLIN: A more–and so they agreed that a more aggressive standard is necessary. However, to achieve even the more modest standard, the 2 degree standard, we aren’t anywhere close. No matter if China does everything they say they’re going to do, India does everything they say they’re going to do, U.S. does everything, we won’t even come close. So that what’s, you know, what we really need is a completely transformative understanding that we need to reduce emissions now. Not reduce the rate of increase in emissions. We absolutely need to reduce missions in the range of 40 percent by 2035, within 20 years. We need to reduce emissions, at minimum, by 80 percent in 35 years. And we’re not close. We can get there, but we have to act now, and it has to be–and it does, you know, these fights within the Supreme Court and so forth are just delaying what really needs to be done, which is an absolute commitment to a green energy transformation.

JAY: In terms of the debate you’ve heard between Senator Sanders and Secretary Clinton, do you hear ideas that are being at least talked about in the direction that you think, what needs to be done?

POLLIN: I mean, they both are saying things in the right direction. To me, recognizing the magnitude of the problems and the political challenge, at this point we have to ask the question, who is prepared to actually undertake the transformative political agenda necessary to achieve this? And I mean, it’s clear what needs to be done. Who’s going to actually fight for it, as opposed to who’s going to split the difference between the oil companies and environmentalists, I mean, in my view the answer is obviously Bernie Sanders.

JAY: I mean, he makes the point that you can’t, you can’t deal with climate change and the kind of reforms that are necessary without doing what he calls taking on the billionaire class, that you can’t separate these two questions, because at least the majority of the billionaire class, there may be some exceptions, but the majority, they don’t want to make the kind of changes necessary because it means actually changing the way we do business, to a large extent.

On the climate stabilization, we can’t wait three or four years. Things have to start now, and therefore what we have to think about is a economic investment program in which we’re going to see, you know, the economy is still going to grow. There’s still going to be plenty of jobs. There’s going to be more jobs generated by green investments. There are going to be jobs lost to people in the fossil fuel industry. We have to compensate them. And we therefore have to get–we’re going to have to get capitalists on board investing in green energy. And they will make profits off of it.

JAY: Okay. We’re going to talk further, and coming–this is the beginning of a series we’re going to talk about, where we’re going to ask Bob what he thinks should be the plan, I guess as he says, he thinks Sanders is more likely to implement it. But at any rate it’s not a Sanders plan, it’s Bob’s plan. What should be a plan for this election campaign, to actually hit the targets within a time frame that’s actually in time, given the science. So please join us for the continuation of our series of interviews with Bob Pollin from the PERI Institute on the Real News Network.