Amazon-Whole Foods Price Cuts Could Have A Short Shelf Life 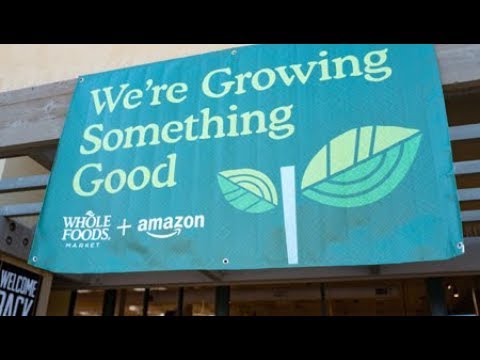 You heard about the Amazon.com and Whole Foods merger. Last week the Federal Trade Commission approved the Amazon acquisition of Whole Foods for 14 billion dollars without much consideration of the implications. This is one of the fastest approvals in the history of large-scale mergers. Amazon immediately proceeded to lower prices on Whole Foods products, which is considered expensive for most people. Many people call Whole Foods the “Whole Paycheck,” but almost every newspaper and TV news that covered this merger, they covered it as if it’s to be celebrated, giving Whole Foods free advertising. Almost every headline read, “Whole Foods prices slashed by 43%” as if it was a door crasher.

However, consumer rights groups warned that allowing Amazon to enter the grocery business like this, giving it 450 stores across the country, will force other grocery stores to go out of business, and will lower the revenues of small farmers and innovative food producers.

Joining us to discuss and analyze this merger is Patrick Woodall. He is the research director of Food and Water Watch. I thank you so much for joining us today, Patrick.

SHARMINI PERIES: Patrick, according to your analysis at Food and Water Watch, what will this merger mean for us?

PATRICK WOODALL: I think, obviously, the lowering of prices in one of the most expensive supermarket chains is something that people find appealing. I think a lot of this is being promoted by the media. Obviously, the owner of Amazon, Jeff Bezos also owns the Washington Post, so you get a lot of free advertising when you push those kind of mega-mergers that you get full coverage on the front cover of the Washington Post. That’s a great advertisement, obviously.

I think what we’re concerned about is a couple of things. First, that although this might have a short-term drop in prices, ultimately consumers may see prices go up over the long term, and it’s going to reduce the choices that you have in a supermarket like Whole Foods. Fewer innovative manufacturers might get onto the shelves when you pursue Amazon’s relentless price-cutting strategies.

And then, third, what is this going to do to other grocery stores? Not just the natural food competitors of Whole Foods, but also all grocery stores. What is the transformational effect of Amazon, and why is it that the Trump administration rubber-stamped a deal that could have implications across the country, from coast to coast, for farmers and consumers, and for manufacturers. It’s a big, big deal that they approved quite rapidly, and fairly quietly.

SHARMINI PERIES: Right, and let me remind our viewers that Trump actually campaigned against Amazon.com, as if it rules out competition in the country and so on, when he was running for office. But furthering the point you were making, the FTC, the Federal Trade Commission, argues that this takeover will not lessen competition, because Whole Foods is a relatively small grocery chain in the US, and they say, so is Amazon. What do you make of that argument?

PATRICK WOODALL: Well, I think it is true that there is little current head-to-head competition between the two of them, but the problem is that the scale and scope and complexity of this merger is one that warranted more than a 30-day review, and the FTC really approved this quite quickly. There are a bunch of things to think about.

Amazon Fresh Delivery, or Fresh Direct, is one percent of all grocery sales, but it’s a third of all internet grocery sales. So it already controls a third of the e-commerce groceries. Whole Foods is not the biggest supermarket in the country, but its 435 stores overlap substantially with the Amazon Fresh Direct hubs. What that means is, in those areas, in the major Amazon markets, and where these Fresh Direct hubs are, they have a lot of market power, particularly over their suppliers. That really means a lot of local farms, thousands of local farms, that have been getting onto Whole Foods shelves, that may find it harder to get into the store once Amazon really pushes down on prices.

There are a lot … These cuts, the price cuts that happened today, the most obvious ones were on organic butter and free-range eggs, and the suppliers for those are going to be facing substantially lower prices for what they sell, and that is going to make it harder for smaller farmers, smaller dairy farms, smaller egg operations, to deliver the kind of produce and eggs and groceries that Whole Foods shoppers want.

The reality is, today more consumers than ever want to know where their food comes from, and how it was produced, and a lot of the transparency that you see in a supermarket like Whole Foods is something that consumers really want. What Amazon has is a world with a really opaque supply chain, where you don’t know where all their goods come from. We’re concerned that when Amazon buys the reputation of Whole Foods, it will be able to sell what look like organic groceries, but might be counterfeits, basically, on their website, because they’ll have the patina of the Whole Foods freshness on the website.

Those kind of things have real impact for both farmers and consumers. When they see a smaller selection of innovative food manufacturers on store shelves, and we may not really know what we’re getting on the Amazon website for food, whether it’s really organic, whether it’s really the kind of freshness that we’ve grown to expect from Whole Foods. These are real quality concerns. Issues related to price, choice, and options, that are going to be more difficult. In the short term, Amazon may lower prices, but once it gets a stranglehold on this market, it may be able to raise prices, and at that point, there may not be much we can do.

SHARMINI PERIES: Now, Amazon has a history of lowering prices, which consumers no doubt like. However, they do so at a loss for long periods of time, driving competitors out of business. Shouldn’t this be considered a form of dumping that is anti-competitive?

PATRICK WOODALL: I think, historically, we have looked at this as a kind of anti-competitive, unfair business practice. This is the standard oil model, right, where they lowered prices, and basically drove all of the other oil companies out of business, at the turn of the last century, and that was the root of some of these biggest antitrust cases, the big stick anti-monopoly stuff of the Teddy Roosevelt era. I think Amazon is largely pursuing a really aggressive, predatory business practice that is akin to those early, early trusts, where they are lowering prices in order to drive their competitors clean out of business, like with bookstores, and in a way that makes it such that pretty much Amazon is the only game in town.

We’re concerned that in a world where they’re buying the largest natural, organic grocery retailer, they could be not only buying that kind of business, that reputation for freshness, but also really be distorting this market that has been built up on a kind of alliance between smaller, local farmers and consumers that want to know where their food is from. If that goes into the e-commerce law of Amazon, we don’t know where the food is going to be coming from. It will be much harder for consumers and farmers to get the market they want.

SHARMINI PERIES: Right. And what do you predict will happen long-term to this merger type of model?

PATRICK WOODALL: I think we’ve seen an incredible wave of mega-mergers over the past few years. The regulators have been asleep at the switch, in both the Obama and the Trump administration, on this food system. We’ve seen mergers from seed to supermarket that are really changing the shape of the agriculture and food system, really across the board. We have three major seed mergers. We’ve had a ton of supermarket mergers. We got Kraft and Heinz merged together. And largely, the anti-trust regulators that are supposed to ensure there’s still a competitive marketplace have been sort of silent on this. Very minor, minor changes around the margins, but largely approving them.

Rubber-stamping this Amazon-Whole Foods merger is just another step in that process of just giving free rein to the food monopolies to run roughshod over farmers and consumers.

SHARMINI PERIES: All right. Patrick, I thank you so much for joining us, and look forward to further analysis as we go through this process. Thank you so much.

SHARMINI PERIES: I’ve been speaking with Patrick Woodall at Food and Water Watch. I thank you so much for joining us here on the Real News Network.

Patrick Woodall is Research Director and Senior Policy Advocate for Food & Water Watch. Patrick has been a public policy analyst, researcher and advocate on economic justice issues in Washington for more than two decades, including extensive work on mergers and consolidation throughout the food system.