A Palestinian Election and Reconciliation After 13 Years?

Daoud Kuttab discusses the demand by eight Palestinian factions to reconcile the differences between the two dominant parties, Hamas and Fatah, as Palestinian President Mahmoud Abbas announces his readiness to hold elections.

Daoud Kuttab discusses the demand by eight Palestinian factions to reconcile the differences between the two dominant parties, Hamas and Fatah, as Palestinian President Mahmoud Abbas announces his readiness to hold elections. 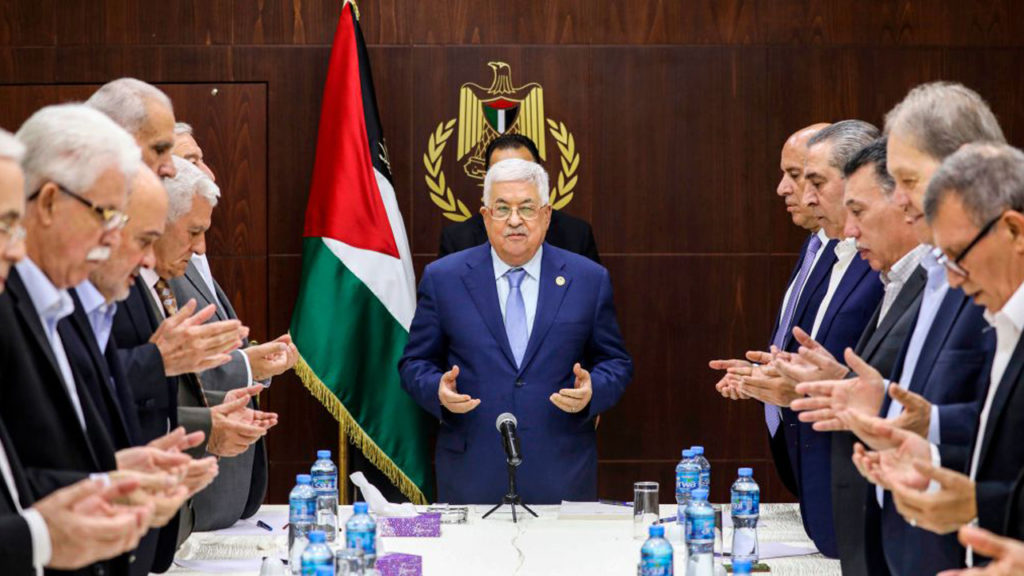 Is there a reconciliation in the works between the two dominant Palestinian political factions, Hamas and Fatah? It seems that way. Shortly after the latest Israeli election results were announced last September, Palestinian political actors started moving fast to demand democratization in Palestine. The opportunity seems to be there now. Now that Israeli politicians are involved in coalition negotiations and are thus unlikely to stop such moves by ordering attacks on Palestinians as happened the last time that a Palestinian election was scheduled back in 2014. Palestinian president Mahmoud Abbas, who also heads the Fatah party, spoke at the UN two weeks ago calling for general elections just a week after the last Israeli election

MAHMOUD ABBAS: Youth and democracy as a foundation for the building of our state and society. We have been trying this in our constitution and exercised this on the ground. We have conducted general elections in 1996, 2005 and 2006. However, they stopped, and they were paralyzed by the coup by Hamas in 2007. Since 2007 we have called for reconciliation and we have called for holding elections. Either way, upon my return to the homeland I will call for regular local elections in the West Bank, in the Gaza Strip, and East Jerusalem. And anyone who opposes these elections will be held accountable before God and the international community.

GREG WILPERT: And last week, eight different Palestinian political factions held a joint press conference in the Gaza Strip. And they published a document in which they demanded a reconciliation between the Fatah and Hamas parties to end the split that serves the Israeli divide and conquer policy. Interestingly, the eight Palestinian factions spanned the whole political spectrum from Islamic Jihad to the Communist Popular Front for the Liberation of Palestine. In a related development, the Palestinian authority in Ramallah just signed an agreement with the Israeli government about the transfer of Palestinian tax money. There has been a long running dispute between Israel and the Palestinian authority over payments to Palestinian prisoners and their families, which has caused the Palestinian government to teeter on the verge of financial collapse. This week though it seems the tax dispute was resolved.

Joining me now from Jordan to analyze what is going on with the Palestinian reconciliation is Daoud Kuttab. He’s a Palestinian journalist and former Ferris Professor of Journalism at Princeton University. Currently he’s director general of Community Media Network, a nonprofit media organization dedicated to advancing independent media in the Arab region. Thanks for joining us today, Daoud.

GREG WILPERT: So the Palestinian Legislative Council–that is, the Palestinian Parliament–held its last election in January 2006. However, almost 14 years have passed now without any new elections. Why were there no Palestinian elections for so long and why is Abbas suddenly calling for them now?

DAOUD KUTTAB: Well, there hasn’t been elections because of the split. Because the Gaza Strip has been taken over by Hamas and then all the agreements to end the split included that elections happen the day after the split is over. The problem is the split is not been over yet, and so one of the new ideas that is emerging is that the elections themselves would help end the split. And the idea is that there will not be any more winner takes all elections, but it will be proportional representation. So whoever wins or loses will be part of the caretaker government that would take us through the reconciliation. Then we would have, maybe after a few years, another set of elections; both parliamentary and presidential. It’s not clear that this will work, and many say that we should have both the legislative and the presidential elections together and that they should be after there is reconciliation, not before. And so, there is disagreement on this issue.

Also, there’s disagreement about the… Or worry that the Israelis will not allow Palestinians in East Jerusalem to vote absentee as they have done in the past. And so, that’s another problem that exists. Finally, there is talk that there should be some kind of an agreement that if people–if members–are arrested as happened in the past, that they each would dedicate or include a name of an alternative so that the Legislative Council will not be blocked up by the Israelis collecting or arresting many members of the parliament. So these are some of the issues that are holding back an agreement. But it seems that things are moving towards elections. And the reason why there is elections is because without elections there’s no legitimacy to do any kind of negotiation or to actually be president or whatever. Because if you have not been elected in 14 years, that puts a big dent on your legitimacy.

DAOUD KUTTAB: Well, any liberation movement in the world honors its prisoners, honors its martyrs, and takes care of them whenever they’re died or whenever they’re in prison. So the money was going to the families of prisoners, in fact, as part of our basic law, Article 121, guarantees that the families of prisoners and martyrs will be taken care of by the government. So this is actually part of our constitutional responsibility to any government to take care of our prisoners and the families of the martyrs. Why did they refuse to accept the deduction? Because it’s basically a theft, I mean the Paris agreement says that Israel is allowed to take three percent to manage the money from the customs and fees on the borders, but it doesn’t allow them to take any other money if they have dispute they can dispute it with the Palestinians, but not to take away. That’s considered a theft.

So that was the reason why Palestinians for many years or many months refused. Why they accepted now, it’s not clear. I mean, obviously they are in bad need of money and they haven’t really recanted their position. They took a down payment basically on the money. They didn’t take all the money. I think they took one billion shekels and the Israelis owe three billion shekels. So they took about one third of what is owed as a down payment until this issue is resolved. And the issue was, especially with the Israeli election, was an issue that the Israeli parties were actually kind of having a debate over, each one wanting to show how tough they are with the Palestinians. Now that the elections are over, the issue is not as big of a stumbling block as it was before.

GREG WILPERT: Well that seems to be the common denominator between both of these developments was precisely the Israeli election. But now I just want to turn quickly to whether you think that there is really a chance for holding Palestinian elections. Isn’t it very possible that the Israeli military would still invade or invade again to prevent them as they did back in 2014?

GREG WILPERT: Okay. We’re going to leave it there for now. But as usual, we continue to follow the situation and these kinds of developments in Israel and in Palestine. I was speaking to Daoud Kuttab, Director General of Community Media Network. Thanks again, Daoud, for having joined us today.