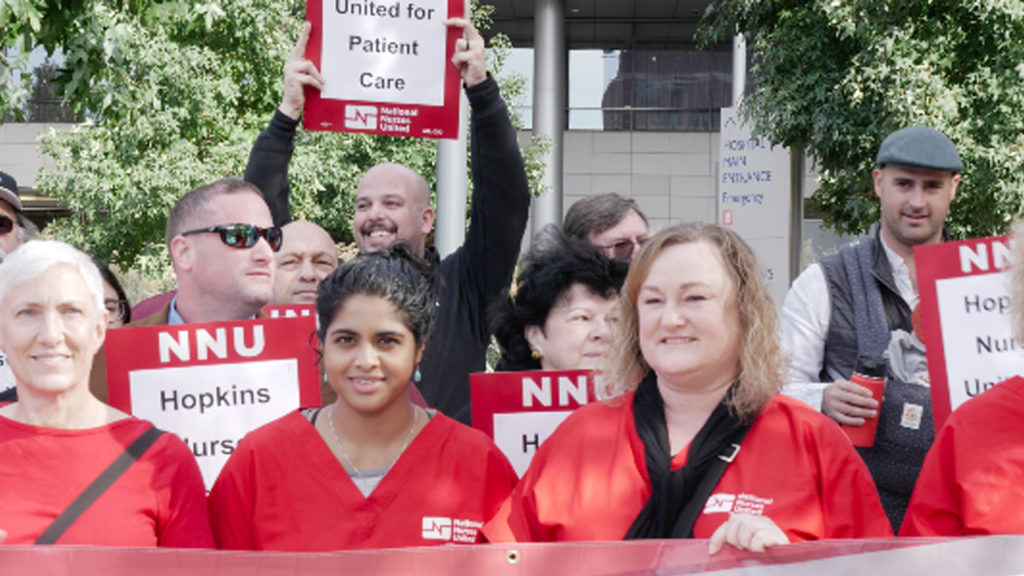 Correction: Derek Jannarone is a supporter of the union effort.

JAISAL NOOR: The nation’s top labor board has found world-renowned Johns Hopkins Hospital in Baltimore violated federal law by restricting the rights of nurses seeking to unionize one of the nation’s top hospitals.

KATE PHILLIPS: What they’ve done is have us not be able to talk to our coworkers on their breaks, and not give them the opportunity to hear vital information that they need to be able to make an informed decision about whether or not they should vote for a union. And the labor law is clear that that is not OK. It’s against the law. The other thing that they’ve done is tell us that we’re not allowed to talk about the union at work, but we are allowed to talk about the union at work.

JAISAL NOOR: The decision might come as a surprise to some, because under President Trump, the board has consistently ruled against unions.

Pro-union nurses and supporters staged a press conference in front of the hospital to announce the news on Wednesday, October 31. Just feet away, nurses opposed to the union effort held a counterdemonstration.

JAISAL NOOR: And so you think there’s no, there’s no merit to the claims?

KRISTINA HOERL: I think the largest number of people who have tried to keep the union out of the break rooms and out of their units is the nurses themselves.

JAISAL NOOR: The hospital said in a statement, quote: “We believe the union’s charges lack merit, and we respectfully disagree with the National Labor Relations Board’s regional office preliminary decision to move this matter to the next step in the process.”

They have not said yet if they will fight the ruling, or if they will agree to a settlement on the charges. If no settlement is made, the Board will issue a formal complaint against Hopkins. Pro-union nurses also say other allegations of unfair labor practices remain under investigation.

PAVI JAISANKAR: The fear is real. Management is definitely driving that fear into us, making us go to mandatory- essentially like anti-union educational sessions. And a lot of my coworkers who previously supported the union have kind of gone into silence and won’t really speak about it, because they’re scared. They’re scared of losing their jobs. So this is really hopeful.

DEREK JANNARONE: I mean, everything we put out is truthful. And in fact, a lot of the misinformation is coming from the hospital side. It’s a very expensive, coordinated campaign to spread misinformation. And we’re nurses at Hopkins; why would we lie about what the union could bring for us? Because we’re going to be in the union. When we vote Yes, we are going to be the union. So it just doesn’t make sense that we would … there’s nothing for us to keep from them.

We’ll keep following the story. From Baltimore, this is Jaisal Noor.