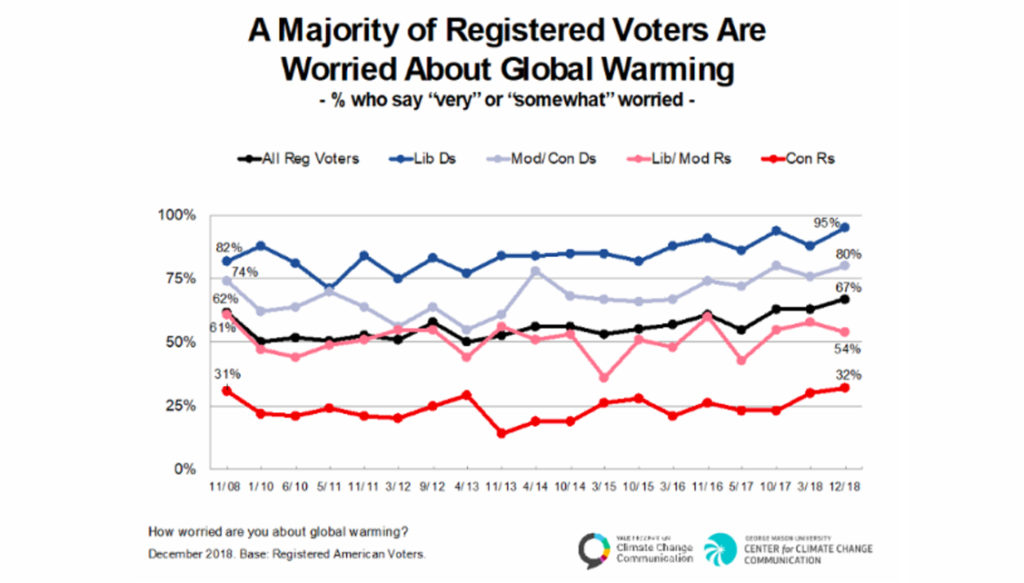 Climate change concerns are more bipartisan than some political elites would like you to believe, according to a new poll. The poll, released by researchers at Yale and George Mason University Center reveals a surprising level of bipartisan concern about climate change, as well as a desire to push for solutions. Released in December, the study, titled Politics and Global Warming, also portrays broad bipartisan public support for the Green New Deal. The study consisted of interviews of 1114 adults, with interviews taking place from November 28 to December 11.

Among the biggest findings are that 74 percent of voters believe climate change is happening and 62 percent believe that human activity has caused it. Further, about two out of every three voters, or 67 percent, are worried about climate change and its potential impacts. Also notable, some 88 percent of those interviewed by the researchers say they support growth of the renewable energy sector via funding research, while 81 percent say they support a congressional Green New Deal. The findings come as Democrats in Congress have released a resolution outlining the scope and ambition of the Green New Deal. This new polling data could perhaps shed light for congressional offices engaging the level of public support for that proposal.

Joining us now from Fairfax, Virginia to talk about the research findings is John Kotcher. He’s a Research Assistant Professor at George Mason’s University Center for Climate Change Communication and one of the study’s coauthors. His research focuses on, among other things, how civic organizations can most effectively recruit, organize, and mobilize citizens, especially political conservatives, to demand action on climate change. Thank you for coming back on The Real News, John.

JOHN KOTCHER: Thanks for having me.

DIMITRI LASCARIS: So John, based on our reading at The Real News, it is surprising how much GOP voters have embraced the idea that climate change is real, caused by humans, and that action of some sort should be taken. As the one who did the work, what do you see as the biggest takeaways from these interviews that you and your colleagues did?

JOHN KOTCHER: Well, one of the most interesting findings from this study is there’s a longstanding finding in the political science literature that many voters form their preferences about a variety of issues based upon the views expressed by their own political leaders within their party. And so, what we’ve found is that after the election, we did see a decline among belief that climate change was happening and human- caused among Republicans, likely consistent with this idea that they were following cues from President Trump that climate change was a hoax and that it wasn’t an issue that should be taken seriously. But what we’re now seeing in the data is, relative to October 2017 throughout 2018, Republican voters are now coming back around on this issue. And we’ve seen an uptick in belief that climate change is happening and human-caused, both among moderate Republicans as well as conservative Republicans. And what we also see is that about one in three conservative Republicans are now worried about climate change, which represents a 9 point increase since October 2017 and one of the highest levels that we’ve seen since we began doing these surveys back in 2008.

DIMITRI LASCARIS: Now, there seems to be a jaw-dropping level of bipartisan support for the Green New Deal too. Did you expect that when you entered into this batch of research, and do you think that could or will prove influential in whatever proposal comes out of Congress?

JOHN KOTCHER: So I don’t know that we had firm expectations about what we would find when we asked the question about the Green New Deal. But something to really keep in mind here is that we also asked people, in addition to whether they support or oppose the Green New Deal, we asked them whether they had heard anything about it previously before we asked them the question in the survey. And we found that over 80 percent of Americans said that they had heard nothing at all about a Green New Deal before we asked them about it. And so, what this suggests is that many, many people who responded to the survey probably weren’t aware that this was a proposal coming from Democrats and weren’t aware of many of the details on it. And they also hadn’t been exposed to any sort of counter-messaging from Republicans at that point. So I think we can probably expect that what we found is probably the high watermark in terms of support for the Green New Deal, at least among Republicans. And now what you’re seeing is a really concerted campaign among conservative outlets to try and erode and increase opposition among Republicans toward the Green New Deal.

DIMITRI LASCARIS: One of the biggest contradictions from the data seems to be that though conservative GOP voters believe in climate change and climate action, they still have come out in support of controversial oil and gas drilling proposals and more drilling. Generally speaking, what do you make of these dynamics and what do you believe to be the cause of such seemingly contradictory viewpoints?

So one of the things to keep in mind here is that global warming policy and energy policy are not necessarily the same things in many voters’ minds. What we’ve seen in previous research is that attitudes about climate change and global warming actually are relatively less influential in shaping people’s attitudes about the specific mix of energy that we should have in the United States compared to perceptions of how costly certain energy sources are, as well as perceptions of how harmful they are to human health. Now, what I think another thing that’s shaping this is a longstanding message strategy among Republicans that we need an all of the above energy policy. So rather than just picking winners and losers and focusing on wind and solar and other renewable sources, it’s been a longstanding talking point among Republicans to call for an all of the above energy policy, which is really code for we need not just renewables, but also oil, gas, and coal.

DIMITRI LASCARIS: Now, there seems to be a bipartisan level of acceptance about the Clean Power Plan for regulating carbon emitted from coal fired power plants as a climate change causing pollutant. This was an Obama-era proposal often denounced by Republicans as a war on coal. If there’s so much bipartisan support for it among voters, why was the entire GOP congressional body against the Clean Power Plan, and why did it spend so much time on blockading the relatively modest climate change solution? Does this depict a divide between the grassroots of the GOP and congressional policymakers on climate change?

JOHN KOTCHER: Yeah, so one thing that we’ve seen in some recent political science research is that contrary to our ideals of what a representative democracy should look like, elected officials’ actions don’t always correspond with the attitudes of their constituents. And one recent study actually found that it was the amount of contact with certain interest groups and wealthy individuals who are making campaign contributions to elected officials that was more influential in shaping the beliefs about public opinion regarding elected officials’ constituents. And so, what we’ve seen in studies like that is that elected officials, as well as their congressional staff that advise them on these policy issues, systematically overestimate how conservative their constituents actually are, and underestimate the amount of support or certain policies such as the Clean Power Plan.

DIMITRI LASCARIS: And lastly, John, one thing not tackled in this study is the intensity of these opinions, and that’s something I think you touched on a few minutes ago. Where do you think these same people, or some other generalizable sample of folks, rank climate change among the menu of policy and societal issues they care about? I know, for example, recent research disseminated by Pew pointed out that out of 18 issue areas, climate change ranked 17th in importance to the persons polled in that study.

JOHN KOTCHER: Yeah, so this is a longstanding trend that we’ve seen in terms of these issue priority ranking questions. Climate change almost always ranks towards the bottom of the list. But what we found, interestingly, the last time we asked a similar question back in 2017, was that there’s a lot of differences when you look at Republicans versus Democrats, as well as differences between liberal Democrats and moderate Democrats. And what we found is that climate change actually ranks number four on the list in terms of priorities among liberal Democrats. What this suggests is that among the Democratic base, climate change is a high issue priority. And furthermore, what we see is when we ask about the issue in different ways, so when we ask people to rank the priority of things like energy independence, developing sources of clean energy and environmental protection, those issues do rank comparatively higher relative to climate change.

DIMITRI LASCARIS: Well, we’ve been speaking to John Kotcher about a new study relating to American attitudes towards the climate crisis. Thank you for coming back on The Real News, John.