New Palestinian Government Powerless but Determined to Fight the Occupation?

Daoud Kuttab explains the dilemmas facing the new Shtayyeh government, the third Palestinian government that was appointed without elections in Palestine. Can such a government maintain legitimacy to oppose the Israeli occupation?

Daoud Kuttab explains the dilemmas facing the new Shtayyeh government, the third Palestinian government that was appointed without elections in Palestine. Can such a government maintain legitimacy to oppose the Israeli occupation? 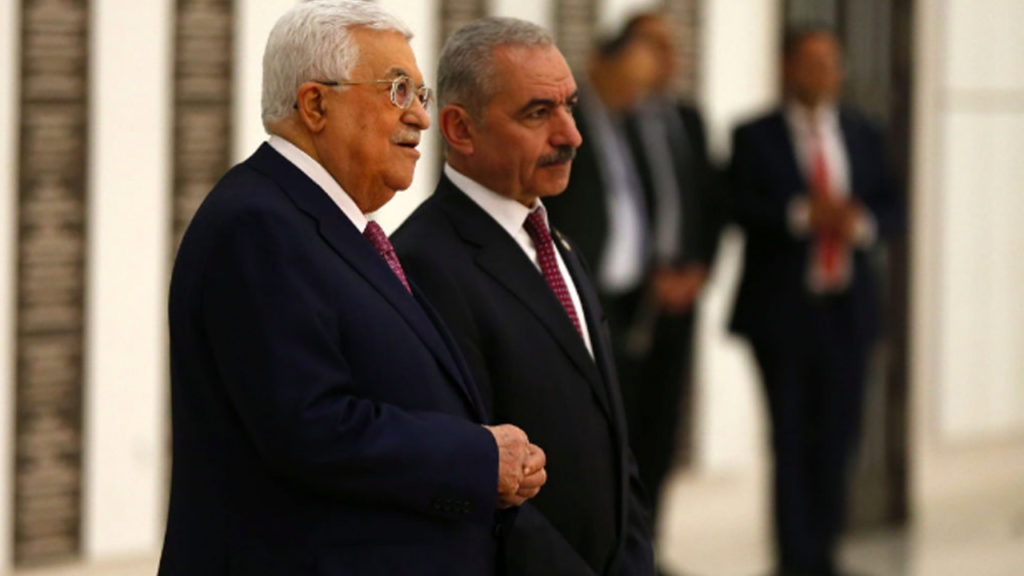 GREG WILPERT Palestinians have a new government, but it’s the third government to be appointed by President Mahmoud Abbas, not one that was elected. Is this new Palestinian government another means for Israel’s occupation of Palestine, or will it be able to resist? It’s The Real News Network and I’m Greg Wilpert in Baltimore. Prime Minister Mohammad Shtayyeh is the third prime minister to serve under President Mahmoud Abbas since the Palestinian elections took place last time, 14 years ago in January 2005. Abbas appointed Shtayyeh two weeks ago, just as he did the two previous prime ministers. The Palestinian Authority is now 25-years-old and still, there is a debate raging among Palestinians whether the P.A. is taking steps towards independence from Israeli control, or if it is a subcontractor of the Israeli occupation. When President Abbas spoke during the inauguration of the new government, he referred to The Washington Post’s revelations about Trump’s planned “deal of the century” to end the Israeli-Palestinian conflict. Here’s what he said.

GREG WILPERT In a recent article in Al-Monitor by Daoud Kuttab titled “Shtayyeh Government to Focus on Economy of Resistance,” he wrote that the newly-appointed government plans to cut down luxuries for senior officials and to implement other austerity measures to avoid raising taxes. Also, it plans to phase out the use of Israel’s currency, the shekel, and replace it with other foreign currencies. We’re now joined from Amman, Jordan by the article’s author, Daoud Kuttab. He’s an award-winning Palestinian journalist and former Ferris Professor of Journalism at Princeton University. Thanks for joining us today, Daoud.

DAOUD KUTTAB Thank you for having me.

GREG WILPERT So in 2014 and again in 2018, it seems that the reconciliation between Fatah and Hamas was just around the corner, and that a unity government could be formed that would represent a broader spectrum of the Palestinian public. Israel and the U.S., however, warned against the formation of a Fatah-Hamas government at the time. Now Abbas has formed yet another Fatah-led government. Why did he do this if his efforts to isolate Hamas don’t improve how Israel and the U.S. treat the new government?

DAOUD KUTTAB Well I’m not sure that the government is created to please either the U.S. or Israel. I think, it’s an emergency government that is created with people from Fatah, not the people close to Fatah. The last two prime ministers, Salaam Fayyad and Dr. Rami Hamdallah, were aligned with Fatah, but they were not members of Fatah. Mohammad Shtayyeh is a member of the Central Committee of Fatah, the highest leading committee of the ruling party, and he will have basically a lot of power to do or to take the hard decisions— especially in terms of austerity, in terms of saving money here and there, and trying to convince people that we have to really think in a different way of our economy. Rather than an economy of statehood, now we have to think of it as an economy of resistance, an economy of austerity.

GREG WILPERT Now in your article, you mention some economic measures that Shtayyeh’s government is considering in order to resist the Israeli occupation. Does the Palestinian government really have enough room for maneuvering? With U.S. funds being cut, and with Israel implementing a new law that confiscates Palestinian funds that are equal to the amount that’s being transferred to Palestinian prisoners in Israeli jails, how much control does the government really have over its budget and its economic policy?

DAOUD KUTTAB Well I think they’re trying two different things at the same time. On the one hand, they are trying to cut down expenses, but at the same time they’ve begun a very active process to put pressure on Israel. Mahmoud Abbas visited Paris where the Paris agreement was made, which guarantees that Israel should turn over all the money that it collects on behalf of Palestinians, except for three percent administrative costs. They also talked to some other European leaders and at the same time, the Arab League met last week, and they agreed to give the Palestinian government $100 million a month to help them overcome the deficit. So on the one hand, they’re trying to cut costs and at the same, time they’re trying to find ways to raise revenue and income for the Palestinian government.

GREG WILPERT So faced with the diminishing popularity of [Abbas]— especially after President Abbas had a role in a number of matters that negatively affected Palestinians, such as the intensifying siege on the Gaza Strip, cutting salaries of public workers in Gaza, arresting and mistreating prisoners. Isn’t it time for the Palestinian leadership to seek a general election in order to regain legitimacy?

DAOUD KUTTAB Absolutely. I think people do want the elections. A Palestinian constitutional court has ordered parliamentary elections within six months. The problem is Gaza. The problem is that the Gazan power to be there, is refusing to include Gaza in any elections, and there is a tough choice. Do you do elections without Gaza, or do you try to find ways to get Gaza involved? I think it’s a very tough call for the Palestinian leadership. I think the issue of elections is important, but I think more importantly is what should we do as the U.S.A. unveils its new, supposedly peace plan, which from initial decisions made regarding Jerusalem and UNRWA and other things, it doesn’t look like it’s going to be anything that Palestinians can live with. The question is, will the U.S. put pressure on nearby countries and others to force the Palestinians to accommodate the new U.S. plan?

GREG WILPERT Well we’re going to have to leave it there for now. But as always, we continue to follow the situation in Palestine and Israel. I was speaking to Daoud Kuttab, award-winning Palestinian journalist and former Ferris Professor of Journalism at Princeton University. Thanks again, Daoud, for having joined us today.