Sarah Harrison and Jeremy Hammond: People Have A Right to the Truth 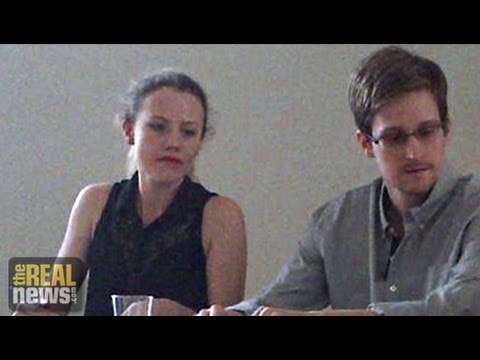 MICHAEL RATNER, PRESIDENT EMERITUS, CENTER FOR CONSTITUTIONAL RIGHTS: Jaisal Noor, it’s good to be with you and The Real News again.

RATNER: Well, this week is in large part encompassed by my work with WikiLeaks at what’s going on with revelations, Snowden, coming up sentencing of Jeremy Hammond.

Two events that really coming together for me that I think are very important: one was–and we recording this on November 7–but yesterday there was an open public letter, November 6, from a woman named Sarah Harrison, someone who perhaps most of the people listening to this may not be aware of or don’t know.

She introduced a very powerful letter yesterday that I want to talk about. And now, after four months, the letter has come out, and she is now in Berlin. She is no longer with Edward Snowden in Moscow–not that there was any break, but that she did what she had to do, and now Edward Snowden is doing, I presume, quite well in Moscow.

The other related event is the upcoming sentence of Jeremy Hammond. Jeremy Hammond is, like Sarah Harrison and WikiLeaks, is a transparency activist like Edward Snowden. On November 15 of next week, Jeremy Hammond will be sentenced in New York City in federal court for an act of civil disobedience, the hacking of Stratfor, a strategic intelligence company, which has opened up the world of private intelligence spying. That’s what Jeremy Hammond did. It was incredibly important. He’s facing up to ten years in prison. He pleaded guilty to one count of computer fraud and abuse act. There is a major campaign now, hundreds of letters have been submitted on his behalf to try and get him time served, which is about 15 months in jail so far.

And Sarah wrote in this letter something that almost brought me to tears, it’s so moving. What she said was:

“I did work with Anonymous to hack Stratfor, among other websites. Those others included military and police equipment suppliers, private intelligence and information security firms, and law enforcement agencies. I did this because I believe people have a right to know what governments and corporations are doing behind closed doors. I did what I believe is right.”

Both incredible heroes and believers in transparency and truth.

Sarah Harrison is paying a price for their beliefs. She has got to Berlin because she has been advised by her lawyers that it is unsafe for her to return to the United Kingdom, her home. Why is it unsafe? Because in the United Kingdom, national security journalism is treated as terrorism, we notice, after what happened with David Miranda, the partner of Glenn Greenwald, was held at the airport and questioned under the terrorism law. And there’s currently an investigation going on in the U.K. around what happened with David Miranda under the terrorism laws. That terrorism investigation has been opened.

Sarah Harrison, like others, has felt the wrath of the United States and U.K. She’s taken refuge in Berlin where, unfortunately or sadly, Laura Poitras has also had to take an exile. She’s the person who cooperated with Glenn Greenwald in both writing articles based on the Snowden revelations, as well as doing a video, and another activist with TOR, a person named Jacob Appelbaum. They too are in Berlin. So Sarah Harrison is paying the price for her beliefs.

Likewise, Jeremy Hammond is paying a price for his bringing the truth to us. It’s remarkable what he exposed, a private surveillance corporation, one among many. Some 70 percent of the U.S. budget for surveillance is now spent giving that money to private corporations who spy on us, Stratfor, the corporation that Jeremy Hammond revealed, spying on activists, from the People for the Ethical Treatment of Animals to the Yes Men, to those trying to get Dow Chemical to finally settle and apologize for what happened in Bhopal, India.

Jeremy Hammond has an incredible amount of support, hundreds of letters asking for time served. Among them are a letter from Daniel Ellsberg, of course, who revealed the Pentagon Papers. He said Jeremy Hammond’s actions have to be seen in light of the profound consequences of private intelligence on political activists. Jeremy Hammond was an alleged source for WikiLeaks, which has posted significant number of files from Stratfor. WikiLeaks, along with a dozen other newspapers, submitted a letter to the court pointing out the significance and the importance of the information revealed in the Stratfor hack.

An important point about that letter from WikiLeaks, as well as the other media, is that WikiLeaks and these papers did not and do not and will not abandon their sources. This is very much unlike The New York Times, and I think even The Guardian, which, after they get the material from their sources, does nothing, nothing to protect them, and in fact, in the case of WikiLeaks and Julian Assange, as well as Chelsea Manning, excoriates them on occasion.

Let’s hope that Jeremy Hammond gets time served. He is a hero, a hero for all of us. I want to end on this incredibly moving statement at the letter end of the letter that Sarah Harrison wrote. And it’s one that we should all take to heart:

And then it’s signed “Sarah Harrison” with the following: “Courage is contagious.”

So let’s hope for Sarah Harrison, Jeremy Hammond, and others who have had the courage to reveal the truth.

NOOR: Michael Ratner, thank you so much for sharing that.

RATNER: Jaisal Noor and Real News, thank you very much for having me again on The Real News.