Monsanto is about to face 11,200 more trials over the potential carcinogen in Roundup, which has prompted legislation to limit the chemical's use

Monsanto is about to face 11,200 more trials over the potential carcinogen in Roundup, which has prompted legislation to limit the chemical's use 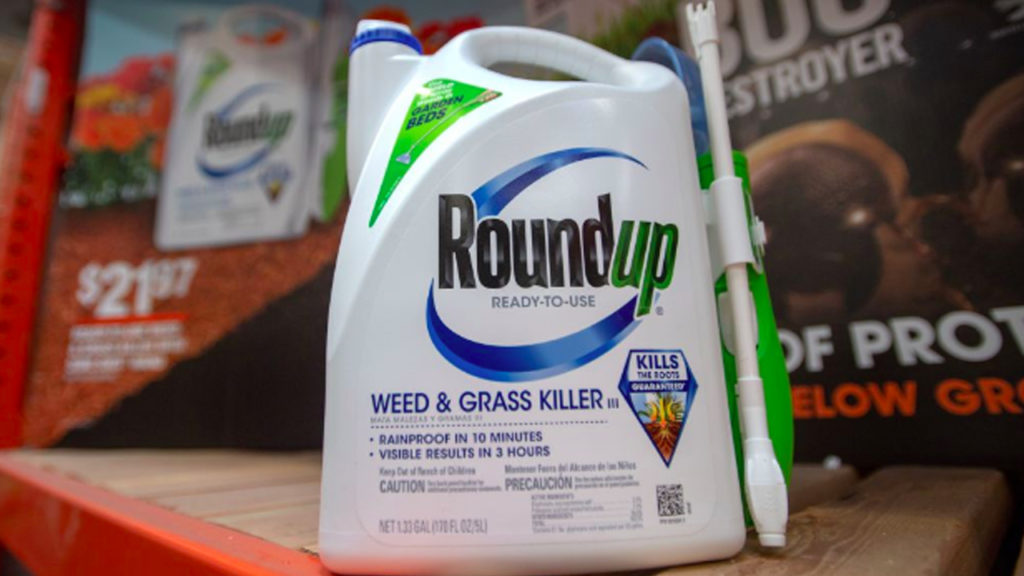 MARC STEINER: Welcome to The Real News Network. I’m Marc Steiner. Great to have you all with us once again.

One of the largest biotech agribusiness chemical companies on the planet is Monsanto, the makers of Roundup, now that it merged with Bayer, that is, especially. They were back in the news again because a federal jury ruled that the weed killer Roundup was a substantial factor in causing the cancer of defendant Mr. Edwin Hardeman. While Trump’s EPA said Roundup is probably not carcinogenic to people, the World Health Organization and independent researchers have found Roundup’s main ingredient, glyphosate, is most likely a carcinogen. Thousands more cases are being filed. What will this mean and what will this portend for Monsanto and the future of their products, the battles with agribusinesses, and for the rest of us?

Well, we’re joined today by Samara Geller, who is a Senior Research and Database Analyst for the Environmental Working Group. And Samara, welcome. Good to have you with us.

SAMARA GELLER: Thank you for having me.

MARC STEINER: So I want to start with this short video of the lawyer who won the case. This took place last month in February when he was commenting on the case and his deposition he took with the folks from Monsanto. Let’s listen to what he had to say.

ROBERT BRENT WISNER: When I took Monsanto’s deposition, I took their corporate representative deposition. He said to me that there is no evidence across the board that there’s any association with cancer. That’s just nonsense. There is a mountain of evidence and this company needs to get straight and to be honest with its customers and say listen, there is evidence that it’s associated with cancer, and let people make a choice about whether or not they use the product. This case is about failure to warn. And the simple fact is they haven’t warned, and they’re going to keep being sued until they do so.

MARC STEINER: I’m curious, your perspective on this. You have what he was saying here as he was taking the deposition before the verdict took place. And clearly, our EPA in the United States has been saying that there’s probably no real connection between that product, Roundup, and their products, and cancer. The World Health Organization, some independent researchers, have found just the opposite, that there probably is. And nobody’s really spoken definitively as I’ve read or seen so far. But talk about this debate going on and what that really means.

SAMARA GELLER: So there is mounting evidence showing a link between glyphosate and cancer, specifically non-Hodgkin’s lymphoma. So in 2015, the International Agency for Research on Cancer, or IARC, which is part of the World Health Organization, they classified glyphosate as a probable human carcinogen. Also in 2017, the state of California included glysophate on its Proposition 65 registry. So this Proposition 65 registry is a list of chemicals that the state of California publishes every year. That list contains carcinogens, also reproductive and developmental toxicants. And so, we have the World Health Organization which is fiercely defending its position on glyphosate as being a probable human carcinogen. We have the state of California, which is also aligned with the World Health Organization.

But we also have emerging evidence coming out of the University of Washington. So these researchers recently did a meta-analysis. So they actually pooled data from studies that were published between 2001 and 2018, and this particular subset of studies actually found a 41 percent increased risk in non-Hodgkin’s in the highest exposed group. That’s pretty damning evidence right there, so that’s a very compelling link between glyphosate and the development of cancer, specifically non-Hodgkin’s lymphoma. But we also know that the judge in this case recently in San Francisco unsealed internal documents from Monsanto that showed that the company worked behind the scenes with the EPA to promote the claim that glyphosate was safe and to point the finger away from the evidence showing to the contrary.

MARC STEINER: And this is the second phase of these trials, is that correct?

SAMARA GELLER: Right. So we’re actually in that second phase right now, so the jury will have an opportunity to review this evidence, this batch of unsealed documents from Monsanto. Also, Monsanto publicly worked to discredit the valid work of researchers and the valid conclusions of scientists revealing the harms of this chemical.

MARC STEINER: So I’m going to play another clip here for all of you and for our guest. This is a gentleman who actually won the first case last year leading up to this year’s case, and this is what he had to say. I found it really interesting and compelling, and I want to see where we think this might take this entire struggle.

SPEAKER: Why was the label important?

DEWAYNE JOHNSON: The label is important because as a pest controller and as those guys out there doing this in the professional field of applying herbicides, it’s a requirement to understand your label and to look at your label. It’s very serious. There’s a whole chapter on reading the label, how to read it, and what to look for. So if that was on the label, people can make an informed choice.

SPEAKER: What did that verdict mean to you?

DEWAYNE JOHNSON: The verdict really meant to me that this thing was not done in vain. And I remember standing there saying to myself, if I lose this case, this company is going to be able to get away. And then they’ll be able to say see, we told you our stuff didn’t do that.

SAMARA GELLER: So this is the second time in less than a year that Monsanto’s signature weed killer has been implicated as the cause of a person’s non-Hodgkin’s lymphoma. And as you said, there’s now more than over 11,000 lawsuits that are coming from farm workers, they’re coming from licensed pesticide applicators, they’re coming from groundskeepers, they’re coming from those most heavily impacted among us. They have repeated exposure to this pesticide from the highest levels of exposure. So these lawsuits are really just the beginning of a long list of cases that will keep coming against Bayer. And so, the chickens are really coming home to roost here. We really think the scientific evidence is mounting, and so there will be similar verdicts and similar outcomes to the last two.

MARC STEINER: So Samara, since there are like 11,200 cases we talked about that are now going to be brought against Monsanto, and that we’ve heard these last two cases were not precedent setting in regard to these other cases coming, but they clearly are going to have an effect. So this is a huge company, and we’re talking about settlements that are tens of millions and hundreds of millions of dollars and more maybe that could be set against Monsanto and Bayer. So what’s the significance of all of this in terms of the entire things that have gone before this when it comes to dealing with Monsanto and Roundup?

SAMARA GELLER: Well, it certainly puts Roundup in the spotlight. It certainly gets consumers, regulators, policymakers thinking differently about the way we regulate pesticides and the way we regulate tolerances of pesticide residues in foods. So this is all having an impact on a lot of different platforms. So EWG actually commissioned tests of popular oat-based products, a lot of them marketed to children. And so, in our tested based products, we detected glyphosate in nearly all of the samples, 95 percent of the samples we tested for glyphosate were positive. And so, we’re actually pushing consumers to do a number of things.

First of all, eat organically if possible, so purchase organic food when you have the means and the opportunity to do so, and the choice to purchase organic. That will help reduce your exposure to glyphosate. But what’s really important to note about the way that the EPA regulates pesticides is that they often set the tolerances far too high to be adequately protective of children’s health. We know children are heavily impacted by pesticides. We know that there are children eating oat-based products that are growing, their bodies are developing, and they’re more susceptible to harms, including cancer.

MARC STEINER: I’ve covered those things in the past and that’s very real. I think most people don’t know about that and people need to know about that. And finally, I’m just curious… These cases, we’ll see what happens in the second part of this case, but I’m wondering what effect you think this has on the work of your organization, other organizations in the political struggles with Monsanto, as well as the legislative battles in this country and in Europe. What effect do you think this will have on all that?

SAMARA GELLER: Well, we’re urging the EPA to actually re-evaluate the evidence of harms from glyphosate. We’re urging them to prohibit this use of glyphosate as a pre-harvest desiccant. And so, we’re assuming this trial will definitely elevate these issues for those EPA regulators. We’re also looking to the FDA to really step up their game. They’ve been really woefully inadequate at releasing information that would help us to fully understand the scope of the problem. So right now, FDA recently released data on the detection of glyphosate in corn and soy, but they’ve really withheld data on some other food crops. We know it’s in wheat, we know it’s in barley, we know it’s in beans. So we’re pressuring the FDA to release data that would help shed light on the full scope of where it’s located in our food supply.

We’re actually looking toward some recently introduced legislation by Representative DeLauro. She’s a representative from Connecticut and she’s promoting the idea that we should prohibit use of glyphosate as a pre-harvest desiccant on oats. The bill is also calling to reduce the permissible residue level of glyphosate by 300 fold, from 30 parts per million down to 0.1 parts per million. So that’s pretty significant. So this bill would dramatically lower people’s exposure to glyphosate, including children’s exposure. They want the USDA to routinely test these products that are marketed to children. That’s one component of DeLauro’s bill.

MARC STEINER: Clearly this is kind of pushing some new issues out here and kind of extending this in ways that hasn’t happened before. We’ll have to really follow this closely. And Samara Geller, first, a, thank you for your work, and b, I look forward to talking to you again as we follow Monsanto and see where this goes.

SAMARA GELLER: Great. Thank you so much.

MARC STEINER: Thank you so much. And I’m Marc Steiner here for the Real News Network. Thank you all so much for joining us. Take care.

The 1619 Project: A Nation Born in Contradiction, a Democracy Defined by Black Struggle