The $400 billion, 40 year oil and gas deal between China and Russia is a response to the new cold war pressure and sanctions on Russia, says economist Michael Hudson

The $400 billion, 40 year oil and gas deal between China and Russia is a response to the new cold war pressure and sanctions on Russia, says economist Michael Hudson 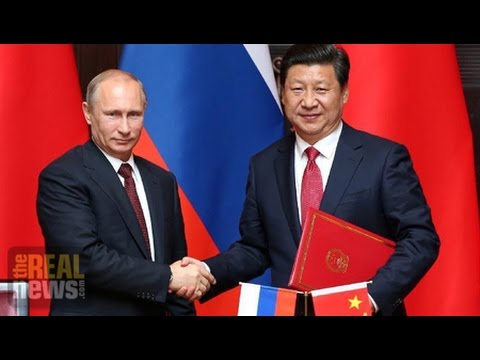 What does all of this mean to Europe, the United States, and the geopolitical reconfigurations on trade pacts?

Here to discuss all of this is Michael Hudson. Michael is coming to us from New York City. He is the distinguished research professor of economics at the University of Missouri-Kansas City.

So, Michael, what’s going on this week in Beijing?

MICHAEL HUDSON, PROF. ECONOMICS, UMKC: Well, obviously what’s in the news right now is the APEC meetings in China. Most of these meetings for the last few years and for the G20 meeting that’s coming up in Brisbane tomorrow–nothing really has been done at all in each of these meetings. So what happens when nothing is done? Well, you really have the United States appearing in Asia as sort of the odd man out.

What’s at issue there are really two different views of how economies should evolve. The one thing that President Obama was doing is talking to his American base, to the Republican Party in particular that he wants to work with on the Trans-Pacific Partnership and to his Democratic base. His vision is a Trans-Pacific Partnership that will abolish government regulation of the environment, abolish government regulation of banking, nullify the Dodd-Frank Act. And if a government such as China will impose environmental fines for polluting the environment, the government will have to pay the company whatever it would have made if it didn’t have any fines. Or if a bank misbehaves and a government says, you need higher reserve requirements, the government will–under the new international law that Mr. Obama is pushing, the government will have to pay the private bank as if it weren’t regulated.

Well, against this you have China that is moving for its own trading bloc, and this bloc is–instead of being in a privatized pro-corporate bloc, it’s a mixed economy. So what you have, really, is the Chinese economy has been growing very rapidly and the American economy that’s been going sort of flat.

So in a situation like this, when there’s really not much to say, both sides want to make everybody look good. So China and the United States have announced pretty much what they were going to do anyway and make it appear as if they’re all doing it in harmony.

As a result of America’s stepped-up new Cold War pressure on Russia and the sanctions on Russia, Russia at the meetings announced a $400 billion 30-year gas deal with China to increase the gas, with some oil also going to China, that China will scale back its coal plants and there’ll be much less coal smoke in the air. This would have be done anyway.

Mr. Obama also said that the United States was going to cut back carbon emissions. But at the same time, he’s still pushing for the XL Pipeline with Alberta to bring Alberta tar sands oil into the United States. That, of course, is the single most high pollution activity on the entire planet.

What has been less talked about are the banking changes that have been announced.

PERIES: Before you move on, Michael, isn’t it a bit ironic that on one hand China signs an accord with the United States, saying, making a commitment to cutting the emissions, but on the other hand they’re making a deal with Russia that includes oil, a fossil fuel that will obviously increase the emissions, not reduce it?

HUDSON: Well, every economy needs oil to some extent. What this means is that China has to use oil for many things that gas simply won’t work for. If, basically, every country’s GDP goes up in keeping with its energy consumption, you could say the rise in productivity for the last hundred years, throughout the whole Industrial Revolution, has been an increase in energy use per worker or energy use per unit of output. So it’s the energy that’s pushing it. And of course China needs oil. In fact, one of China’s problems is that when people are getting richer and higher income in China, they want to have cars, and cars use gas, meaning oil. So of course China’s going to be depend on oil from Russia.

Mr. Putin said that as a result of these deals, Russia’s trade with China and the rest of Asia is going to increase from 25 percent of Russia’s GDP to 40 percent. And what this does is this is sort of leaving Europe in the cold. What’s been clear at the meeting is that there’s a coming together between China and Russia. And this has been just exactly the opposite of what American foreign policy has been trying to push for ever since the 1980s. So what is ironic, if we get to irony, is that where the United States thought that it was putting pressure on Russia and sanctions by the adventure of NATO in the Ukraine, what it’s actually done is bring Russia and China together.

And the single most important way in which it’s come together is Mr. Putin announced that Russia is setting up its own bank clearinghouse system. This is the so-called SWIFT system. When you transfer funds from one bank to another or when any bank uses U.S. dollars, it has to go through the SWIFT clearinghouse system that the United States uses. Right now, the only country that’s not part of this is Iran. And Russia’s worried that, well, okay, America’s tipped its hand. It’s showed that what it really wants to do is break up Russia and break up China together, and it could use a interruption of financial services and banking services to sort of disorient an economy. So Russia and China and Iran, and presumably other Asian countries, are now moving to have their own currency clearing system.

Now, to be independent of the SWIFT system, this has to be independent of the U.S. dollar. So Russia and China and other Asian countries are using the ruble, the yuan, and other Asian currencies instead of the dollar. So what you’ve seen in the last few days in Beijing is really a rejection of the dollar standard, a rejection of American foreign policy. China’s doubled its military spending since Mr. Obama was there last time, in 2009. And so the president of China very politely said, well, let’s make sure there’s not an accidental bang up in the air or on sea. And what he means is, we’ve defined our airspace over the islands that we’re claiming as ours, and if one of your planes comes too close for ours and we bump into it and knock it down, please don’t take this as an attack. We don’t really mean it personally. So China’s really throwing its weight around.

And Mr. Obama has looked very uncomfortable at these meetings because he knows that he hasn’t gotten anything that he wants. The other Asian countries are not about to join the Trans-Pacific Partnership quite happily, and they’re moving on today to fly to Brisbane, Australia.

And this is where you’re going to see, in the next few days, Europe being completely left out. The sanctions that the United States and NATO have insisted that Europe impose on Russia means don’t trade with Russia. So Russia has put on the counter-sanctions against French and Baltic and European exports to Russia. French farmers are already demonstrating. And this means Marine Le Pen and her nationalists are likely to win the next election. The Baltic states are screaming because Europe, France, Latvia, and even Germany had been looking to the one growing market since the last few years is Russia, and the United States says, don’t deal with Russia, give up this market. Well, Europe is left in a position of economic stagnation and shrinking. The United States has put pressure on it not to trade with Russia.

And Russia has essentially said, this is just exactly what we wanted to do to protect our own industry. Now we are promoting our own industrial independence. In conjunction with China, we’re integrating the Russian economy with China, Kazakhstan, Iran. Russia is now going to be building two atomic reactors in Iran. And all of a sudden the whole center of global investment is shifting to Asia, leaving the United States out. That’s really the message. And it’s also leaving Europe out of all this.

So you can expect at the Brisbane meetings, the G20 meetings coming up next week, increasing pressure from Europe to break away from the U.S. insistence on sanctions. All the United States has diplomatically at the present time is military pressure, while Russia and China have economic growth opening up, markets opening up, investment opening up. And despite the fact that there was an agreement on high-technology trade between the United States and China, the U.S. is basically being left out. And this seems to be why Mr. Obama was looking so out of sorts at the meetings. He knows that the strategy that he was given by the neocons has backfired very badly.

PERIES: And finally, Michael, how do you think this is going to be dealt with by Congress and a Republican-controlled Senate now?

HUDSON: Well, Mr. Obama basically has said, thank God the Republicans are in power. They are the only party that would agree to the pro-corporate, anti-labor Trans-Pacific Partnership. And Obama said that he looked forward to dealing with the Republicans now that he doesn’t have to deal with the Democrats anymore. And he has shown himself really to be a Republican in the same spirit as Cheney and George W. Bush. He’s rejected his own party. The noises coming out of Washington from Harry Reid and the Democratic leadership are very resentful at Mr. Obama for mishandling the economy so badly and losing them the election. So Obama essentially, if I can paraphrase what he said, is now I’m a Republican, I’m supporting Wall Street, and he’s letting the Republicans know he’s pushing for the kind of giveaways that the lobbyists have written into the Trans-Pacific Partnership. I think you’ve had Lori Wallach on your show explaining exactly what this is. So you can expect Obama to move very sharply to the right from here on in, getting Republican support, while the Democrats scream in agony and said, oh my God, what have we ever done with bringing this guy in.

PERIES: Michael Hudson, as always, thank you so much for joining us.

HUDSON: It’s good to be here. Thank you very much.