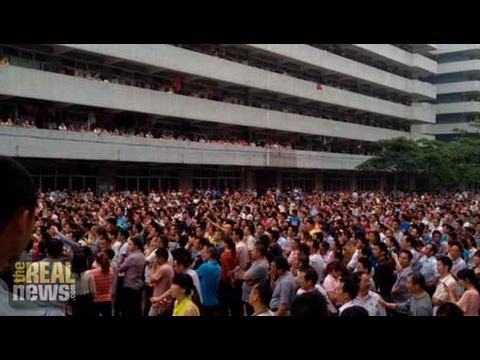 Thirty thousand Chinese workers have been on strike for two weeks against the world’s largest maker of athletic shoes. They make sneakers for companies that you know of, of course, like Nike and Adidas. And workers have shut down production. And the company Yue Yuen’s stock price has sharply declined. The workers allege the company has failed to adequately fund social security pensions and contribute to housing funds.

Joining us to discuss this strike are our two guests.

Michelle Chen is a contributor to The Nation and In These Times and an editor at CultureStrike.

And we have–joining us from China is Xiaoming Chai. He works at Peking University, and he’s an instructor for the Further Education Project.

MICHELLE CHEN, CONTRIBUTOR, THE NATION: Thanks.

DESVARIEUX: So, Michelle, let’s start off with you. The Yue Yuen strike is estimated to be one of the largest in decades. Can you tell us why so many workers are striking? And what are their demands?

CHEN: The workers basically just want the company to make good on their obligations under Chinese law to pay social insurance costs. Many of these workers say they are owed a lot of overdue payments on the part of the company for basic things like pension funds, unemployment insurance, basic social welfare protections that are laid out in Chinese law under the newly reformed labor laws.

You know, this is certainly not the only incidence in which a company has shirked on its obligations to pay. These violations of the social insurance [incompr.] payment laws are routine throughout the workforce. But these workers feel like it has reached such a crisis point that they are willing to go into the streets.

Another big issue is that there are, in addition, contributions to the housing fund that they’re owed. And with the rising cost of living, many of these workers are suffering from these really burdensome housing costs that they cannot keep up with, and their wages, unfortunately, are not rising as much as they should be to keep up with the cost of living.

So now we have tens of thousands of workers–I believe at a peak it was over 30,000 workers–marching in the streets, you know, undertaking a work stoppage, protesting. And, also, many of them are just not going to work. They were [incompr.] swiping their cards and just, you know, not working. So they’re resisting in a variety of ways.

And the Western companies have simply been caught off guard. And it’s been–it’s made some waves, because it’s very unusual for, you know, a country with supposedly no independent, you know, labor unions, where labor activity is really suppressed, for workers to be taking action like this.

DESVARIEUX: Yeah. You mentioned it’s unusual. But the Chinese civil think tank Institute of Contemporary Observations says that there have been 30 strikes involving at least 50 workers since March. So it seems like there’s an uptick. And I want to turn to Xiaoming and get your point of view. Are we actually seeing an uptick here?

CHAI: (Sorry.) And, actually, I think that this is the first time for years we got this kind of–so a huge a scale of strike, even in Canton. So there was–so there have been often strikes from different factories. It’s even from some big brand names, like the IBM and Nokia.

And also, until now, the strike last over two weeks, from 5 April to now. I think it’s quite dramatic. And, also, workers are quite confident with their activities.

DESVARIEUX: Can you tell us–I want to get a sense of do workers usually actually win in the end. What’s the likelihood that we’ll actually see the company agree to these terms?

CHAI: Okay. I would say now it’s still what they call in English: it’s a seesaw war. And we heard quite many things, like that dozens of workers have been interrogated, questioned by the local authority, even arrested. Some activists, like Zhang Zhiru, they have been detained under house arrest by the local policemen or the local government.

But workers still keep the high confidence, and because two hours ago I was into some–it’s kind of the instant social message group with workers, one of the largest with the workers, and 400 or 300 workers, they are discussing their planning, their feedback about today and several days’ feeling. So workers, still they’re planning to last the strike until the May Day. They say if they can’t get their demands, they will not give up. So it’s quite militant, it’s quite confident, yes.

CHEN: I’d just like to add, also, in a lot of these incidences when you do see workers going on strike, in the end it does end with some kind of negotiation. Often the management will give concessions. You know, it’s rare that you’d see, like, a massive victory, but, you know, frankly, the management often just wants people to go back to work, and often workers know what they want, and when they get what they want, you know, things just continue. I mean, you know, we may not see, you know, huge, radical upheaval in the streets any time soon, but workers do know how to organize and can take very targeted strategic actions when they know–when they have a specific goal in mind.

DESVARIEUX: Alright. Let’s turn and talk about this Guardian report that came out talking about a labor organizer, Zhang Zhiru. He basically has been missing for more than 24 hours, and his wife suspects that he has been detained by state security services. Can you tell us about Zhang Zhiru’s role in organizing the strike, Xiaoming?

CHAI: And, actually, I would not say he is the organizer, because this strike was spontaneous and not well organized. And it’s still [the mainly] [incompr.] automatic phenomenon. It’s planned, or that we even can say not planned by the workers but launched by the workers. And Zhang Zhiru, he’s a quite senior, experienced labor activist in Shenzhen and in Dongguan. Yes, he is quite famous, and he has been involved in the strike, probably from 12 April, but the strike did start before that. And Zhang want to advised and support the workers, and legally and also technically, how to [learning] and how to organize the individual groups. And Zhang was detained by the local authority or local policemen, I think, not only 24 hours. Probably–to today it’s already the third day. And his wife still cannot contact him, and also not only himself, and also other individual activists also had been interrogated by the local authority and the policemen, yes.

DESVARIEUX: Michelle, is it common for labor organizers to be intimidated or detained?

CHEN: Yes, common for anyone, you know, doing anything bold politically in China to suffer some kind of intimidation or harassment. You know, it doesn’t always wind up with someone actually being detained, but, you know, these things are nothing new.

The issue with labor activists is, you know, as Xiaoming was saying, this is kind of a spontaneous uprising that’s coming from the grassroots. So it’s going to be very hard for authorities to contain simply by detaining one guy that they perceive as the leader. Frankly, it doesn’t–I mean, I’m viewing it from afar, but it seems like you don’t–it can never be just one guy who’s leading, you know, tens of thousands of workers; there’s got to be something else going on there. So I imagine that this campaign will survive despite the detention, and if anything, hopefully this will open up some more room for dissent in organizing and for leaders to have a little bit more breathing room, because what they can do as organizers is help to negotiate when it comes down to bringing workers to the table. Ultimately, the government can’t keep down 30,000 people. And if there is a representative who’s willing to represent their interests on behalf of the entire workforce, then they need those people. They can’t just throw them in jail.

DESVARIEUX: Alright. Michelle, I’ll ask the final question to you. Do you foresee that we’ll see a shift from Western multinational companies to start investing and looking to produce elsewhere? Does this signal sort of an end to cheap Chinese labor?

CHEN: I’m hesitant to say that anything signals the end to cheap Chinese labor, because it has been such a faithful servant to U.S. consumers and for so long.

But yes, I mean, you do see companies increasingly undertaking capital flight, as it’s known. You know, just as we saw manufacturing jobs being offshored from the U.S., you’re seeing companies that used to produce a lot in China sort of slowly shifting a lot of their production facilities to countries with even lower cost in labor, such as Indonesia or Cambodia or Bangladesh, you know, as we’ve seen with the recent tragedies that have gone on there. So it is, you know, a race to the bottom that is continuing.

But, I mean, the thing is, Chinese workers have a lot of leverage. I mean, you know, 1.2 billion people is not something even a huge multinational can just walk away from. So if they can use that leverage and use it to advance, you know, political as well as economic justice, that might change China, it might change the manufacturing industry for the better. I just hope Adidas and those other companies will actually start to listen before it’s too late.

DESVARIEUX: Alright. Michelle Chen, as well as Xiaoming Chai, thank you both for joining us.

Xiaoming Chai is an instructor of the Further Education Project at Peking University, and a current affairs commentator for several Chinese youth websites. Before that he had worked for several NGOs for over six years in mainland China, Hong Kong and Europe. His main studying interests are labour movements, social conflicts and globalization in China.

Michelle Chen is a contributing editor at In These Times and associate editor at CultureStrike. She is also a co-producer of “Asia Pacific Forum” on Pacifica’s WBAI and Dissent Magazine‘s “Belabored” podcast, and studies history at the City University of New York Graduate Center. Find her on Twitter: @meeshellchen.

Xi Jinping: China’s ‘Chairman of Everything’

September 5, 2017
Sign Up for Our Newsletter
Help Us Make Real News!