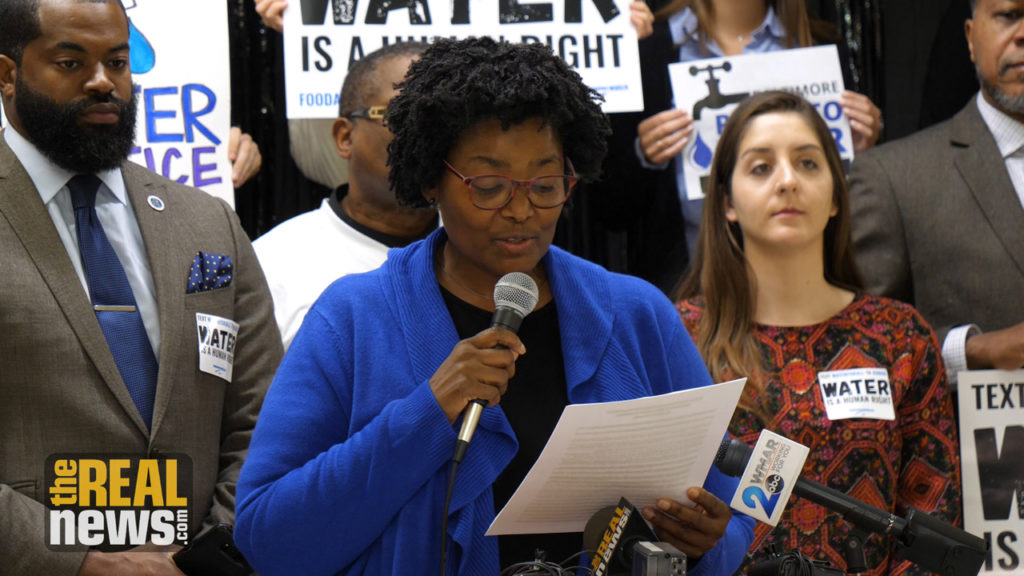 DHARNA NOOR: Senator Mary Washington and Delegate Nick Mosby announced that they will introduce legislation to prevent Baltimoreans from losing their homes and churches due to unpaid water bills.

MARY WASHINGTON: It’s time to forever remove water bills from the tax sale foreclosure abyss that has engulfed far too many of our residents and property owners for far too long.

DHARNA NOOR: In a church basement on North Avenue, the legislators stood beside faith leaders and civil rights advocates and announced the reintroduction of the Water Taxpayer Protection Act, which would bar the city from sending homes and churches to tax sale because of overdue water bills.

MARY WASHINGTON: Not only are you making people homeless, you’re dipping into their their assets, the one thing that they have of value.

DHARNA NOOR: Each year, Baltimore auctions off liens on thousands of properties to collect unpaid taxes and fees owed to the city. In 2017, the city sent almost 11,000 homes to tax sale, and over 70 percent of those were triggered by water bills. Some say the practice is an important way for the city to raise revenue, but critics call it inhumane.

NICK MOSBY: The reality is the loss of a property over something is minuscule as your water is just completely unconscionable in 2019.

DHARNA NOOR: Mosby and Washington say the practice is unnecessary.

MARY WASHINGTON: The officials managing WSSC, Maryland’s largest public system, have repeatedly rejected attempts by special interests to use tax sale foreclosure to collect unpaid water bills. If selling homes for water bills doesn’t make sense in Prince George’s County or Montgomery County, and they’ve decided that they do not want to punish vulnerable residents already struggling to cover the costs of water, then it certainly does not make sense to do this in Baltimore City.

DHARNA NOOR: Then-delegate Mary Washington introduced similar legislation, but it failed in the Senate. Instead the state passed a watered-down year-long moratorium on water liens for 2019. The legislation Washington and Mosby will propose this session would expand the existing moratorium. It would make it permanent, create protections for places of worship, and ensure that water bills cannot compound with other unpaid bills to trigger tax sale.

MARY WASHINGTON: You could owe $50 or $100 for an alarm that went off, right. And then that’s another process that actually is eligible for tax sale foreclosure. You could add that to your $400, youir $500 water bill, and then together then that could go to tax sale. What this would say is that that $400, that $750 that you owe in water is not included in that total.

DHARNA NOOR: Councilwoman Shannon Sneed also announced a City Council resolution that will call on the General Assembly to pass the bill.

Supporters say the measure is urgent because water is increasingly unaffordable.

RIANNA ECKEL: Water rates have more than quadrupled since the year 2000, and another three-year 30 percent rate increase will be voted on by the Board of Estimates this coming Wednesday. Water rates are currently unaffordable for more than a third of our city’s residents, and this impending rate hike, if approved, will only deepen our city’s water affordability crisis.

RIANNA ECKEL: There are stories of families receiving bills ranging from a couple thousand dollars up to $50,000 for just one month of usage. These incorrect bills have wrongfully landed families on the tax sale list, and nearly cost many their homes.

DHARNA NOOR: Baltimore City resident Kimberly Armstrong says this happened to her. Erroneous water bills sent her home to the tax sale list twice. In 2014 she got a $1400 bill. In 2017 she got a bill for $2500.

KIMBERLY ARMSTRONG: So when my house in to tax sale, my mortgage company would always get my house out of tax sale. But however, whatever they paid would go into my escrow account, which made my mortgage go up each time. So now my mortgage is, like, double what it was in 2014.

DHARNA NOOR: City Council President Jack Young has also introduced a measure for income-based water billing, but Mosby and Washington say even if that passes, their proposed state legislation is still necessary.

MARY WASHINGTON: It is just fundamentally wrong to sell someone’s home for an unpaid water bill at tax sale. It is a very separate issue. This is not a negotiation. It doesn’t say, OK, if I have a better system–which we should, anyway–we can’t use this process. And in fact, I think if we take this away it will force better accountability.

DHARNA NOOR: Supporters say this year they’ve got what it takes to pass this bill.

NICK MOSBY: Well, it’s my hope that the city delegation, meaning the House side and Senate side, as well as the City Council through a resolution, can all collectively come together, stand shoulder to shoulder with our most vulnerable residents, saying that this practice should no longer be in existence in the city of Baltimore.

DHARNA NOOR: We reached out to Baltimore’s Department of Public Works for their thoughts on this legislation, but they said they weren’t yet prepared to comment.

For The Real News with Taylor Hebden, Dharna Noor, Baltimore.

November 13, 2019
Sign Up for Our Newsletter
Help Us Make Real News!