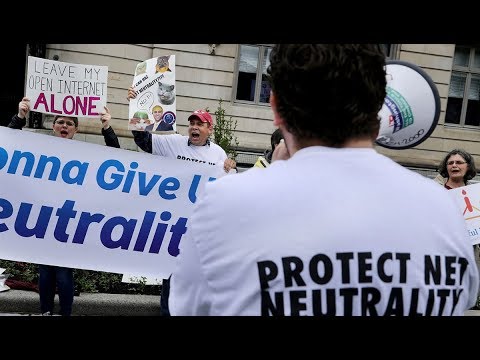 AARON MATÉ: It’s the Real News. I’m Aaron Maté. The chair of the Federal Communications Commission, Ajit Pai, wants to end the principle of a free and open internet. This week, Pai announced the plan to undo rules that bar internet providers from controlling how we access the web. The rules Pai is targeting prevent providers from doing things like slowing down or blocking content as they see fit. Pai announced this plan to the Heritage Foundation’s Daily Signal.

AJIT PAI: It is essentially in my proposal to repeal the Obama administration’s heavy-handed regulations adopted two years ago in a party line vote that regulated the internet. What I’m proposing to do is to get rid of those regulations, and to return to the bipartisan light touch framework that governed the internet, starting in the Clinton administration and continuing all the way to 2015.

AARON MATÉ: Pai’s plan would undo the net neutrality rules that were won in 2015 after years of grass roots activism. I’m joined now by Kit Walsh, staff attorney at the Electronic Frontier Foundation. Welcome Kit. What is Pai up to here?

KIT WALSH: Hi. Thank you for having me. So what Pai is doing is, for the first time, removing the protections for net neutrality that have kept the internet open. So he is doing a wholesale rollback of the protections that we, a coalition of public interest organizations, and millions of internet users won in 2015. And there’s a bit of trickery going on when the opponents of net neutrality say that this is going back to the way it was before. That’s just not true. In the very early days of the internet, when you got your internet access over phone lines, those phone lines were subject to non-discrimination rules under the same legal framework that is implicated in the 2015 open internet order. And so, that was why you were able to use your phone to call up a dial up ISP. There were thousands of ISPs, you didn’t just have to get your internet from ATT. And they weren’t able to stop you from putting a modem on your phone line.

So the internet grew, thanks to non-discrimination rules like net neutrality. Then broadband came along and there was a fight about how to classify it. This is within the FCC’s discretion. They can say we’re going to treat broadband just like any other telecommunications service, but what they chose to do instead is to treat it like what’s called an information service, which it’s really not. What that meant is you no longer had the kind of protections that the 2015 open internet order established. Instead, you had a decade of going back and forth, where the FCC would try to protect net neutrality in some way. Comcast would sue them, get it struck down. They tried another way, Verizon sued them and got it struck down. Finally, they did it the right way, the legally supportable way, which is what we and our allies and internet users urged them to do. So, this was a victory for the grassroots, like you said. And what Ajit Pai is doing now is rolling back that victory, and for the first time saying it’s open season.

ISPs can, as long as they’re transparent about it, they can discriminate with respect to who’s able to speak online, what services you can use, what information you can access, and they can create fast lanes and slow lanes that favor their own content or the content of paying partners.

AARON MATÉ: Right, so what this means for example … say, I say at the Real News, we put out our stuff on the web. If these rules are rolled back, could internet providers charge us more money to deliver this faster? And if we don’t pay up, that would mean that our audience doesn’t experience the Real News as fast as, say, a site that pays up does?

KIT WALSH: Right. Absolutely. So, for instance, Comcast owns a share in Universal Media Company. AT&T has its own streaming media platform. Verizon briefly had a news platform where they said that people were not to discuss net neutrality or mass surveillance, because that was contrary to their corporate interests. So, what companies can do if this proposed order goes through is they’ll be able to threaten to block access to your website. So they’ll say, “Hey Real News, it would be a shame if you could no longer reach Verizon customers. Why don’t you pay us an extra fee?” And short of that, they can say, “We’re going to speed up our own news content. It’s gonna be a better experience for people. And your connection is going to be degraded.” That connection that internet subscribers are already paying for … they’re gonna put road bumps in the way so, when they go to watch the Real News, they’re not able to get a high quality stream. They have to make do with less bandwidth or it’s less reliable.

AARON MATÉ: Right. Well let me go back to more if Ajit Pai and his comments to the Daily Signal, which is the website of the Heritage Foundation. And he mentioned that argument that you claimed where he’s saying that he just simply wants to reinstate the old rules, go back to the old days. And he actually said that this measure will actually help increase the quality of internet service. This is what he said.

AJIT PAI: The fundamental issue with internet access that people have in America today is not that their internet service provider is blocking access to lawful content. It’s that they don’t have the fast, cheap internet … the service that they want. And so that’s why repealing these heavy handed regulations on internet service providers will give them a much stronger business case for spending scarce capital building up these networks.

AARON MATÉ: So, that’s Ajit Pai, the chair of the FCC. I should note … so, he was speaking to the Heritage Foundation. And it seems like every time he announces a major rollback of net neutrality, he does so to right wing groups like Heritage. The time before this, if I recall right, he made an announcement to Freedom Works, which is a group funded by the Koch Brothers. But Kit Walsh, if you could respond to what he’s saying there. This is gonna actually free up much needed capital to help improve broadband.

KIT WALSH: So, it’s interesting because those are the arguments that the lawyers for the ISPs made when they went to the FCC and argued that these rules should be rolled back, but that’s not what their CEO said to investors when they had a legal obligation to tell the truth. When the open internet order came into effect, they said it wasn’t going to affect investment. And we’ve also seen … one of the things that reduces infrastructure investment is the fact that there are fewer and fewer competitors in this space. Most Americans don’t have choices for broadband. There have been a series of mergers in this space. Sprint was trying to acquire T-Mobile, and when that deal fell through they said, “Well, all the money we were going to use for that acquisition, we’re going to pour it into investment instead.” Because there’s competition, a need to invest, and that’s a good use of their capital.

So I think the idea that the rules, which are actually saying keep offering non-discriminatory internet service the way you have from the very beginning … the idea that that’s heavy handed or burdensome or is gonna decrease investment is just not supported and not true. You made an interesting point also about Ajit Pai making these announcements to right wing groups. It’s actually very difficult to find ordinary Americans who oppose net neutrality. Among Republicans, it’s a 73 percent approval of net neutrality, even more if you don’t call it net neutrality. And among Democrats, it’s 80 percent support. The only place where there’s not bipartisan support is unfortunately in Washington DC, in the halls of Congress.

AARON MATÉ: Right. Interestingly, the attorney general of New York, Eric Schneiderman, just wrote to Ajit Pai saying that he’s been investigating thousands of fraudulent comments that were submitted about net neutrality rules as part of the public comment process. And he had some interesting findings. Can you talk about what happened there?

KIT WALSH: Sure. So in the previous cycle, back in 2015. We broke records for comments to the FCC. And the overwhelming majority were in favor of protecting net neutrality with legally enforceable rules, which ultimately it did. This cycle, there were a lot of comments from both sides. There were some form letters, many of which are people legitimately agreeing with the content of those form letters, some maybe not. And under any measure, the FCC has acknowledged that the majority favored net neutrality and keeping the existing scheme. And an analysis that was done by the ISPs themselves, which you would expect to favor their side, actually found that of all the people who went to the FCC website, who bothered to type in their own unique comments, 98 percent favored net neutrality.

So, it’s very clear that public sentiment is on the side of keeping these rules. People are not interested in handing over control of what they’re able to read and do online to their internet service providers.

AARON MATÉ: Right. So finally, on that front, the FCC vote is next month in December. What is already happening to pressure them, and what can be done in the weeks until that vote?

KIT WALSH: So, yesterday was the day that Ajit Pai announced his intentions clearly. And just that day alone, our coalition drove 175,000 calls to Congress. Congress is the place where the FCC vote can be stopped right now. So the today’s announcement is just a proposed order. They’re going to vote December 14th. FCC votes have been stopped in the past. And if we keep melting down the phone lines at Congress, that’s our best shot.

KIT WALSH: Thank you very much.

AARON MATÉ: And thank you for joining us on the Real News.

Kit Walsh is a staff attorney at EFF, working on free speech, net neutrality, copyright, coders’ rights, and other issues that relate to freedom of expression and access to knowledge. She has worked for years to support the rights of political protesters, journalists, remix artists, and technologists to agitate for social change and to express…

Re-Decentralizing the Internet: The Fight to Unlock a Future of Digital Freedom (Pt 2/2)