It’s Not Left Versus Right, Both Parties Have Let Us Down

Progressive candidate for Congress Jess King who is gaining ground in a conservative district in Pennsylvania says the liberal versus conservative narrative ignores the real concerns of voters, healthcare and corporate control of congress

Progressive candidate for Congress Jess King who is gaining ground in a conservative district in Pennsylvania says the liberal versus conservative narrative ignores the real concerns of voters, healthcare and corporate control of congress 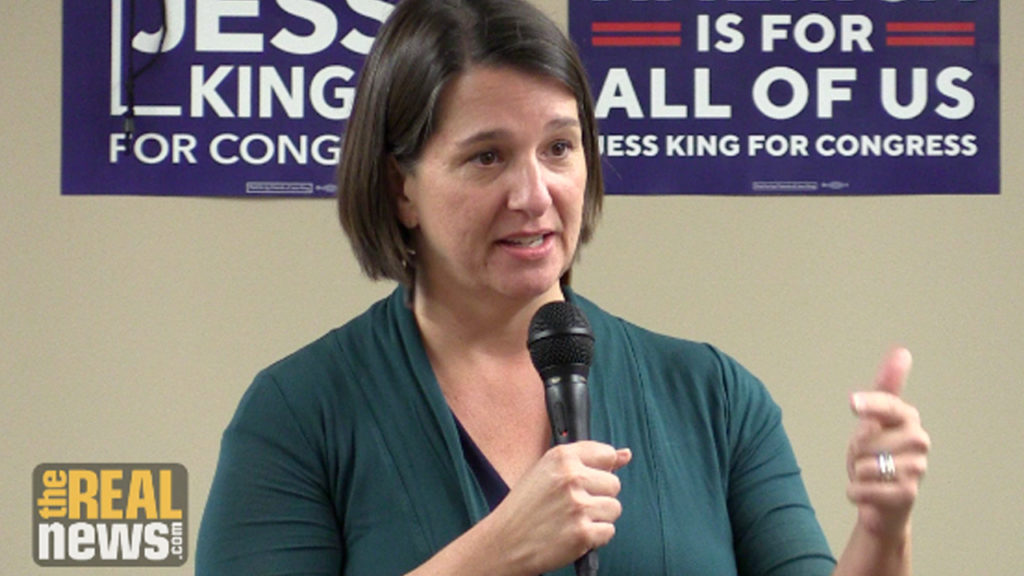 TAYA GRAHAM: This is Tara Graham, reporting for The Real News Network in Ephrata, Pennsylvania.

When newcomer and Democratic candidate Jess King begin closing in on the Republican incumbent, we wanted to know how her progressive message was resonating with Trump voters. Our journey started here, in the offices of Lancaster Stand Up; a coalition of residents organizing for progressive candidate Jess King, who is running a surprisingly close race in the conservative 11th District.

TAYA GRAHAM: The group calls voters on the phone and canvasses door to door, but not with the message of Democrats versus Republicans. Instead, the grassroots organization has been focusing on core issues like Medicare for All and getting money out of politics.

ALEX HERR: And so there’s been quite a few- I personally know a few people who are registered Republicans I plan to vote for Jess.

TAYA GRAHAM: It’s an approach that candidate Jess King described as top to bottom, not left to right.

JESS KING: You know, and I think what we see is that voters aren’t necessarily on the left-right spectrum as much as they are on a bottom-to-top spectrum, and that we need to talk more about two political parties that have sold out to special interests, have sold out to a corporate establishment and a political establishment that isn’t working for people. And so rather than a left to right, we see bottom to top. And so you have a huge opportunity to talk to folks across, you know, what we think of as a traditional spectrum, to win them over on ideas that really are commonsense at the end of the day.

TAYA GRAHAM: A way of campaigning for issues that affect and appeal to people. It was a theme that resonated throughout a town hall in a small library outside of Lancaster, where King talked about why she was not only shunning big money from Washington PACs, but had concerns about the Democratic Party and its reliance on corporate money.

JESS KING: That politics as usual is this, you know, us and them, they’re bad, we’re good. It’s not that way. I think both parties have failed us in many ways at the national level and sold out to special interests. Both parties are doing this. We know that the DNC- I’m running as a Democrat. In a two-party system you have to be that, but trying to show that we’re like an independent. The DNC is taking fossil fuel money. You know, so how- we know that Democrats have sold out on deregulating Wall Street, and don’t reflect the values of working families as much as they need to at the national level. We have our disagreements with the party, right, [inaudible].

I think that our elected officials today need to be willing to stand up to leaders in both parties; to say we need to have new leadership and new resolve to reflect the interests of the American people across party lines.

JENNY D’ILLIO: Well, what we’re finding is that issue-based politics, if you will, is much more effective. People here, they think Democrats and they think, you know, the horns and the tail and all that. But when you get to talk to them about the issues, we agree. We agree on the issues. They want to take care of him. Immigrants, they want healthcare for all.

TAYA GRAHAM: Her strategy seems to be working. In a district with two so-called ‘pivot counties’ that went for Trump in 2016. King has managed to pull within the margin of error against her opponent Lloyd Smucker.

After the town hall we went back to Lancaster to talk to voters and to see if King’s message was resonating.

SEAN: What is important to me is that we elect somebody who is willing to stand up to the current president.

There we found genuine concern about the direction of the country, and a feeling of unease.

PETE: I’m a Democrat, but a conservative Democrat. And I’ve often found that Republicans have been right on certain issues. But they’re not right on anything while they stand idly by a president like this.

TAYA GRAHAM: The question is will King’s message resonate enough on Tuesday to turn a red district blue?

KIRSTEN: I’ve seen her even talking to people who don’t necessarily agree with her, but she hears them out and listens to what they have to say.

TAYA GRAHAM: This is Taya Graham and Stephen Janis reporting from Lancaster, Pennsylvania.