Italy’s Right-Wing Government Collapses – Will the Next One Be Better?

Matteo Salvini of the right-wing League party tried to maneuver for new elections, but failed. Now coalition talks are happening to see if the anti-corruption 5-Star Movement and the center-left Democratic Party can form a government. Luciana Castellina assess the situation

Matteo Salvini of the right-wing League party tried to maneuver for new elections, but failed. Now coalition talks are happening to see if the anti-corruption 5-Star Movement and the center-left Democratic Party can form a government. Luciana Castellina assess the situation 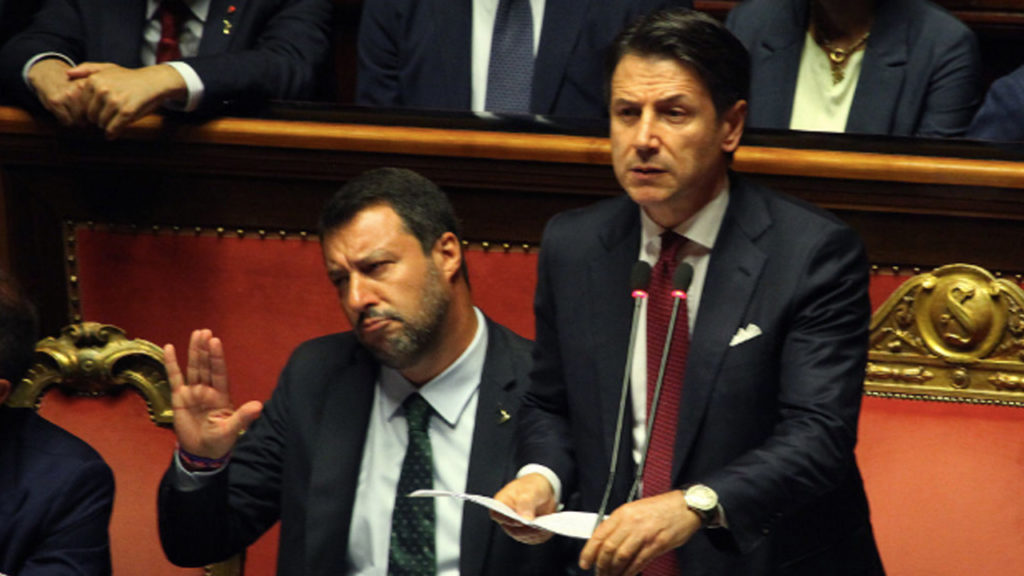 Italy’s coalition government between the right-wing League Party and the populist Five Star Movement collapsed on Tuesday, when Prime Minister Giuseppe Conte resigned. Italy’s latest political crisis began last week, when Matteo Salvini, the leader of the League, who is also the Deputy Prime Minister and Minister of the Interior, announced that he wanted a no-confidence vote against his own coalition government so that a new general election could be held. However, his move backfired when Prime Minister Conte decided to resign instead, allowing for coalition talks between the Five Star Movement and the center-left Democratic Party, so that a new government could be formed that would exclude the right-wing League party. Here’s what Democratic Party leader Nicola Zingaretti had to say after meeting with Italy’s President on Thursday.

NICOLA ZINGARETTI, DEMOCRATIC PARTY SECRETARY: Good morning. We express to the President of the Republic, Sergio Mattarella, our willingness to try and form a different majority and to start a new political phase to create a government that will be a political discontinuation of what there was before. For us, it is not an easy choice, but because of the negative legacy left by the previous government, and the political distance that separates us from some forces, in particular the Five Star Movement, a key player of the Conte government.

GREG WILPERT: Thirteen months ago, when the coalition between the League and the populist anti-corruption Five Star Movement began, the right-wing agitator and strategist Steve Bannon called it a populist experiment. He told The Daily Beast at the time that the cooperation between the League and the Five Star Movement would be almost as significant as the Trump administration or Brexit in shaping a new political order. That experiment, however, seems to be over for now in Italy.

Joining me now from Rome to analyze Italy’s political disarray is Luciana Castellina. She’s a co-founder of the Italian newspaper Il Manifesto, and has been a deputy both in the Italian Chamber of Deputies and a member of the European Parliament. Her latest book in English, published by Verso, is a memoir titled Discovery of the World: A Political Awakening in the Shadow of Mussolini. Thanks for joining us today, Luciana.

GREG WILPERT: So, Salvini is trying to topple the government in which he himself is a senior minister. Now, this looks like a big gamble, actually, in a country known for many political scandals and short-lived coalitions. Should Salvini be concerned that Italians will punish him for dragging them into yet another election, or is his popularity so big that this gamble is justified?

LUCIANA CASTELLINA: You know, I want to just make a preface. It’s very difficult to explain what happens in Italy to a non-Italian audience because it’s a very bizarre and new situation. All the political forces who are contending in parliament at the moment are different from what they used to be. And so, how can I explain to you who the Five Stars are, just to tell you something? It’s something which can be one thing and another. There is right-wing people inside, there are left-wing people, and they are much more left-wing than Salvini, of course, but it’s difficult to understand. So now what I think that Salvini, in any case, received a coup. I mean, he’s in a more difficult situation than he used to be. He is strong if he goes to the election immediately, but what happened in the last weeks proves that he is not so sure of himself as he used to be.

The wave of demonstrations in Italy in the last weeks against him, knew because lot of people [inaudible] understood that what he was promising to everybody was just fake news. So now, he’s embarrassed and he’s on his retreat. The point is, will the new alliance between the Democratic Party and the Five Star work or not? That’s the question. And my personal— and not just personal— opinion is that the Democrats should have looked for an agreement with the Five Stars from the very beginning. They – “okay, if you accept these points and you are supporting this government – otherwise, no. And instead, they lost a couple of years now in this absurd game which was the government.

GREG WILPERT: So, Luciana, the Five Star Movement and the PD, which is the Democratic Party, which is supposed to be a center-left party, are now negotiating for a coalition agreement. I’m wondering, first of all, what do you think can one hope in the best case scenario could come out of this negotiation in terms of a government? Will it be a center-left government if it succeeds, or could it be something worse? What do you think?

LUCIANA CASTELLINA: Well, you see, we all, I mean, on the left, we all hope that this government will succeed because if you go to elections in this moment, in this framework, there is the real possibility that Salvini may get a lot of votes. Plus, we have a very bad electoral load, which means that Salvini could enjoy a premium of a prize, and so it is very dangerous because Salvini’s very dangerous. But after having said this, the kind of program on which they will work if they succeed in making the government, is very, very vague because the Democratic Party has taken a very right-wing position when he was in government, you know?

On migrants, for instance, the Minster of the Interior of the Democratic Party of the time is the one who made the agreement with the Libyan government to send back the migrants. So one of the main most important points – it’s difficult to say that on one side you have the left, and on the other side the Five Star are something else. The Five Stars are a mixture of all possible positions. It’s a wide protest and now [inaudible] as well.

So what kind of program will come out? We don’t know. And I really – it depends very much on what we could probably do from outside the government. We are all hoping that they make the government because Salvini is much worse, but what kind of government will come out, it’s difficult to say. The position proposals are very vague, both sides. And I would say, in a certain way, the position of the Five Star are more left-wing then those of the Democratic Party. For instance, because they have faced and they are speaking about the ecological crisis, and it isn’t enough just to say economic development, but to say it must be a new model of development. I just think this example will show you how bizarre and ambiguous is the situation.

GREG WILPERT: Now, Italy’s economy continues to face serious problems. Its indebtedness as a percentage of GDP remains over 130%, and economic growth has been stagnant for almost 10 years now. Now, how is Italy’s current economic situation affecting the political situation in Italy at the moment? And also, wouldn’t this have an impact, a negative impact perhaps, on the League’s possibility of wining an election, should it come to an election?

LUCIANA CASTELLINA: Well, you see, misery and crises economically does never help with reasoning well. They feed the protests, and the wide protests, and this is what’s happening in Italy. The situation in Italy, the economic situation depends very much on a very high public debt, which has been accumulated by the previous governments. A long time, longer debt cancellation, the government have spent without managing and never trying to keep the budget in order. So now we are since years in a situation in which Italy cannot spend money, so we have a very bad situation at universities because the budgets are cut. We have great unemployment because two situations which exist in every country: The old work and the old jobs no longer exist, but this loss of jobs has not been replaced by new form of jobs, more technologically-advanced. Because of this, what would have been required are investments, and these investments were not there because of the depth and the lack of resources.

And then, you know, this is why Italy is in such a bad situation. One might should say that all Europe is not in a good situation, not just Italy, but Italy more because it has always been a great weakness, which is the south and the north. And you know that Italy has more migrants than immigrants? Because there are millions of young Italians all around the world who try to find jobs in other European countries, but all go abroad— New Zealand, Australia, and so on. I mean, just to tell you how bad the situation is. We have the south of Italy, which is getting worse and worse. It’s going to probably be like— So that is, the context is very difficult. And when you have unemployment, misery, and cuts in public spending— everything, health, schools, universities, and everything— then what comes out is a blind protest. It’s not a project.

The Democratic Party Remains a Party of War, Not Peace