Israeli Arms Trade in South Sudan Was Disguised as “Agriculture”

Investigative journalist Sam Mednick revealed that the agricultural company Green Horizon was a front for former Israeli general Israel Ziv's security company CST who were supplying arms to South Sudan, fueling the conflict by selling arms to both sides

Investigative journalist Sam Mednick revealed that the agricultural company Green Horizon was a front for former Israeli general Israel Ziv's security company CST who were supplying arms to South Sudan, fueling the conflict by selling arms to both sides 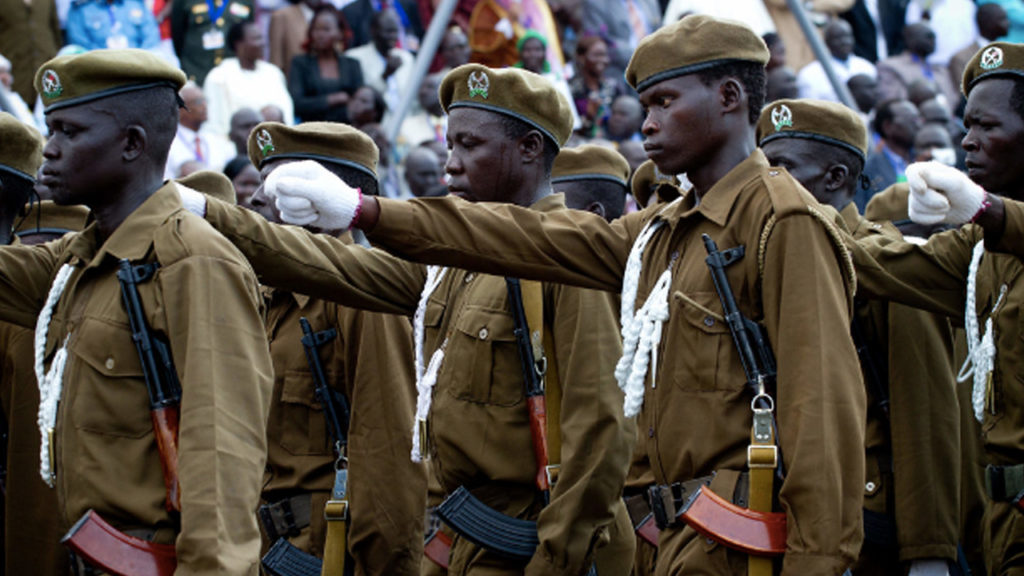 An investigation into the illicit arms trade has revealed that an Israeli security company known as Global CST and owned by retired general Israel Ziv has been funneling weapons to fuel the civil war in South Sudan. The US has imposed sanctions against General Ziv because there’s an international UN arms embargo prohibiting arm sales to South Sudan. The civil war in South Sudan, the world’s newest country, has been going on for almost the entire time that South Sudan exists, for about six years now. And last week the government extended the ceasefire agreement with the rebels that has been in place in two regions of the country since April. Over 400,000 people have been estimated to have been killed so far in the civil war.

The investigative journalist who investigated the backstory of these arms sales is Sam Mednick, who has spent two and a half years in Juba, the capital of South Sudan. According to her, money and resources earmarked for agriculture end up in the hands of private military companies. Sam Mednick recently published the results of her investigation with the Organized Crime and Corruption Reporting Project, or OCCRP. General Ziv has responded to the accusations of his illicit arms deals as follows.

GENERAL ISRAEL ZIV: It’s nothing, nothing. It’s just a bubble with no relation to reality. Our company signed an agricultural contract before a bit more than three years. And at that time we also received the money. It’s an amount which doesn’t resemble even a little the sum which they talk about.

GREG WILPERT: The President of South Sudan, Salva Kiir, recently interceded with Israel’s Prime Minister, Benjamin Netanyahu, on General Ziv’s behalf by asking Netanyahu to help lift the US sanctions against Ziv’s arms company, Global CST. We are now joined by Sam Mednick, the investigative journalist who exposed the story. She joins us from Juba today where she is a freelance journalist with more than a decade of reporting experience. Thanks for joining us today, Sam.

SAM MEDNICK: Thank you very much for having me.

GREG WILPERT: So, as people will see, this is a pretty complex story, and many companies are involved in this. And that makes it, of course, very difficult to follow the trail. In your story for OCCRP, you show a picture that you took of a sign in Juba of General Ziv’s agricultural company, Green Horizon. And later, that sign was taken down. Now, what makes the sign so significant and incriminating? And how does it fit into the overall picture here?

SAM MEDNICK: Well, I wouldn’t necessarily say that the sign is incriminating and it’s not the biggest piece of the story. What it does show is it raises questions about affiliations of the agriculture project because there is a military seal on the sign. So it raises questions about the affiliations of who the agriculture project is associated with. But I would say that the bigger picture here is that this was a multimillion dollar agriculture project meant to feed millions of South Sudanese, currently seven million of which are facing hunger, almost two million of which are on the brink of starvation, and that there’s very little to show for that project according to some government officials by their own admission. So that would be the bigger picture to what the story was speaking to.

GREG WILPERT: And tell us about what we think has happened to those funds. I mean, what is going on here? So apparently there’s very little to show for it. And instead, what do you think is happening?

SAM MEDNICK: Well, according to the US sanctions, Ziv and some of his companies were sanctioned for selling arms to both sides— the opposition and the government— during the civil war and fueling the civil war for [inaudible] sanctions say that the farms were used as a cover. In our reporting, we show that there’s no record for where these funds went. That $45 million, more than that, was given to the farming project. But there’s no record of that money, of the $45 million that Ziv said went to the project in the government budget. It bypassed regular procedures that a government-funded project would go through; such as going through Parliament and being approved by Parliament. There’s no detailed records of what the funds were spent on according to several government officials who want those records. So there’s a lot of sort of discrepancies and questions surrounding the project and the transparency of it.

GREG WILPERT: When you went to Green Horizon Farms, you said you saw soldiers hanging out in the fields among agricultural equipment, and you were told that the program is for retraining veteran soldiers, which general Ziv calls “adjusting to a post-conflict situation.” Now, how do you know that this is not actually the case? What do we know there?

SAM MEDNICK: Well, I went to two farms late in 2017, and one of them was one of their farms, one of Green Horizon’s projects where they were growing some fruits and some vegetables, which I saw. And the second farm that I went to, it wasn’t one of their official farms. It was a training project at the time. They said that they had short training projects for veterans to train them to go into agriculture after they got out of the army, demobilization. And so, I mean, that’s what I saw when I was at that project. And that project apparently was going on for a couple months, and the soldiers were there, and there were some plots of land that they were working on.

SAM MEDNICK: I think a lot of—It would make sense for a lot of people who were former generals in any army to go into security and start security firms, and many people do. And that’s not really the issue. A lot of people do that. I think the issue with this particular project, as I said before, is that it’s multinational companies profiting off of conflict and taking advantage of countries with weak governance systems and a lack of oversight. And that is really the bigger picture here, that a multimillion dollar project meant to feed the South Sudanese people – that that didn’t actually happen.

SAM MEDNICK: I think that people in any context, there are people who are happy when there is accountability, when certain things are exposed that perhaps weren’t before. And I think the idea is for South Sudan, the South Sudanese people, to not be taken advantage of or exploited by international companies that come in, by its own government here, by people who find ways to be able to do that. And so, I think that the more projects like this are exposed and looked into, that there can be more accountability for people involved and then more services given to the people of South Sudan, to the civilians.

GREG WILPERT: Okay. Well we’re going to leave it there for now. I’m speaking to investigative journalist Sam Mednick, who exposed a good part of this story. Thanks again, Sam, for having joined us today.

SAM MEDNICK: Thank you for having me.

Sam Mednick is a freelance journalist with more than a decade of reporting experience. She has spent two years based in South Sudan as an Associated Press correspondent, while also writing for other outlets covering the human impact of South Sudan’s civil war.