Khalifa Haftar's onslaught on the Libya's capital was openly supported by the UAE, but evidence has emerged that his forces received weapons and training from Israel.

Khalifa Haftar's onslaught on the Libya's capital was openly supported by the UAE, but evidence has emerged that his forces received weapons and training from Israel. 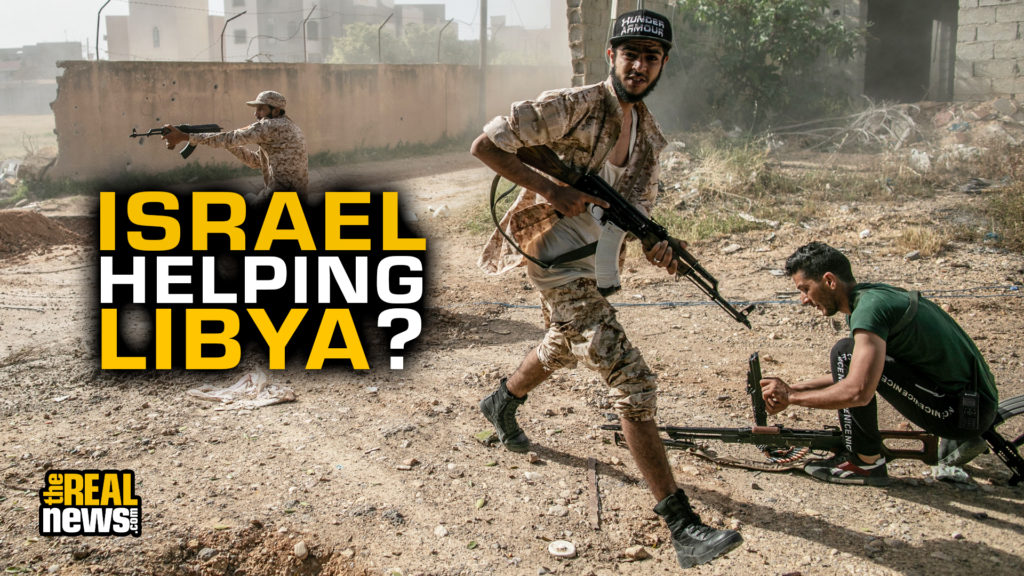 The civil war in Libya rages on despite the threat of COVID-19. It’s a civil war that became a proxy war featuring many global and regional actors.

On one side is the Government of National Accord, the GNA, backed by Turkey and the United Nations. On the other side is the warlord, Khalifa Haftar, who was backed by the UAE and to a lesser extent, Egypt.

In recent days, the GNA forces have been pushing back against Haftar’s advancement and have actually regained some of the cities which fell in his hands in the last couple of months.

Hamza Jazayeri and Fuad Yazeka are soldiers for the GNA who spoke with Al Jazeera about the recent turn in the tide of the war.

Speaker 3: We’ve launched this attack to cut the supplied line coming to their positions in Southern Tripoli. We advanced 27 kilometers inside the administers of borders of Tarhona, and the now in control of the area.

We advanced from several axes; we’ve captured a number of their forces, weapons and military vehicles. The move was ordered by our operation room. We will win the battle.

Kim Brown: New evidence published by middle East Eye by the Israeli journalists, Yossi Melman shows that Haftar has also been receiving help, training and weapons from Israeli forces; and he met with senior members of the Mossad on several occasions.

And to talk about this today, we’re joined with professor Greg Shupak. He teaches media studies at the University of Wealth in Toronto. He writes both fiction and analysis of politics and media, and his work is published in Electronic Intifada, In These Times, Jacobin, Literary Review of Canada, Middle East Eye, TeleSUR and more. His most recent book is called, “The Wrong Story: Palestine, Israel and the Media,” published by Oz Books in 2018.

Greg, thank you so much for joining us. Thank you for being here.

Gregory Shupak: Thanks for having me.

Kim Brown: So we know that Warlord Khalifa Haftar was in the employ of president Muammar Gaddafi in Libya during the late 70s. And that was the year in which the brother of Israeli Prime Minister Benjamin Netanyahu, Yoni Netanyahu, was killed in a hostage rescue operation in which Libya was involved.

Now Libya was considered one of Israel’s biggest enemies when Haftar was a member of the government and the UAE is even today considered an enemy of the state to Israel. So how do you explain Israeli forces giving aide to their former or maybe even current enemies?

Gregory Shupak: Sure. I mean it’s been awhile since the events that you referenced, Haftar eventually a defected from Libya under Gaddafi and was actually living in or near Langley, Virginia, and is known to have had CIA links.

Israel is backing him as part of a larger Alliance with ostensible or past opponents, including the UAE as you mentioned; but also this broader grouping of Sunni majority Arab States. So Saudi Arabia is involved; Jordan is involved.

They play lesser roles compared to the UAE and Egypt. But that’s one plank or the intervention in Libya is one plank of this coalescing of an Israeli partnership under U.S. leadership of this Alliance between pro-U.S. governments in the Middle East against not only the GNA in this case, but the reason driving this Alliance, I should say, is that this is an alliance against Iran.

And that Israeli partnership in that is part of why it’s participating in this Libyan War. It’s as a one Israeli source put it, in the middle East side story from a couple of years ago, it’s a case of Israel acting according to the principle that a friend of a friend is my friend, and enemy of my enemy is my enemy.

So that’s largely what we’re seeing here is that…

There are other factors I can elaborate on, but one, hugely important, is that this is part of the Alliance between us and pro-U.S. dictatorships in the Middle East and Israel to form an anti Iran Alliance, and also to basically we get the Arab dictatorships to completely give up forever on the Palestinian issue.

Kim Brown: Greg, we’ve been covering here at The Real News, the regional importance of the Libyan Civil War over the conflict of natural gas. Coronavirus has caused the price of natural gas to plunge. So as a result, in your opinion, do you think that the interest of the regional powers in this conflict will decline; and if not, do you think that this war will drag on?

Gregory Shupak: I think that the war will drag on. And I think that the drop in the price of oil, is that something thing to keep an eye on and it’s relevant. However, oil is still the engine of the global economy in many ways.

And it’s also worth considering that oil is not the only natural resource in Libya or in Africa as a whole. And in fact, I think there’s some reason to believe that part of why Israel is interested in Libya is to give Israel more of a foothold on the continent. It should be understood I think in context of Netanyahu’s visit to Chad where he met with president Debbie last year. This was a historic advance for Israel in Africa.

So African countries have all kinds of resources that are of interest to outside powers; mineral resources, for example. It’s not only a matter of oil.

And so from that perspective, I think we can understand a lot of the reason why outside powers have been involved in Libya on not only Israel, and in fact, dating back to the original 2011 intervention to overthrow the Libyan Government, the NATO led intervention, which is sort of brought so many horrors in the country; whether we’re talking about the return to slavery or the emergence of slave markets or the total social breakdown.

So I think that that thirst for resources extends even beyond oil and beyond Libya, itself, to something that we can see as Libya being an outpost for access to other parts of the continent.

Kim Brown: I mean, you raise an excellent point as to what are some of the motivations of Israel to be interested in the Libyan Civil War. But why would Israel take such a risk of being exposed for supporting the warlord Haftar’s forces and in defiance of the United Nations?

Gregory Shupak: Yeah, it’s a good question. I think that Israel has done many things that have flouted international law; certainly with regard to the Palestinians, but also historically in recent history in Lebanon and present day in Syria.

So I don’t know that international public perception or international law are major concerns for Israel. I think that, like most states, Israel is pursuing, it’s ruling classes, perceived material interests. And in this case, that can include not just the natural resources and geopolitics that we’ve been talking about, but things like having an alliance with someone they can work with, which they believe Haftar to be since they’ve met with him, Israeli officials have.

And this could lead to future weapons contracts, for example, if a Haftar were to come to power; so that could be lucrative. Israel’s a big player in the international arms market. So you know it may be that Israel miscalculated like it has in other contexts to endure maybe a bit of a bad press here and there in order to pursue these longer term economic and geopolitical advantages.

Kim Brown: All right. Well, we’re going to leave the conversation there. We’ve been speaking with Professor Greg Shupak. He teaches media studies at the University of Wealth; and his latest book is titled: “The Wrong Story: Palestine, Israel and the Media.”

He’s been joining us today from Toronto.

Greg, thank you so much for your time today.

Gregory Shupak: Thanks so much for having me

Kim Brown: and thank you for watching the real news network.