TRNN's Shir Hever explains that Israel's new Law of the Nation-State makes it impossible to pretend that Israel is a democracy. Unequal rights are recognized by the government as the essence of the state

TRNN's Shir Hever explains that Israel's new Law of the Nation-State makes it impossible to pretend that Israel is a democracy. Unequal rights are recognized by the government as the essence of the state 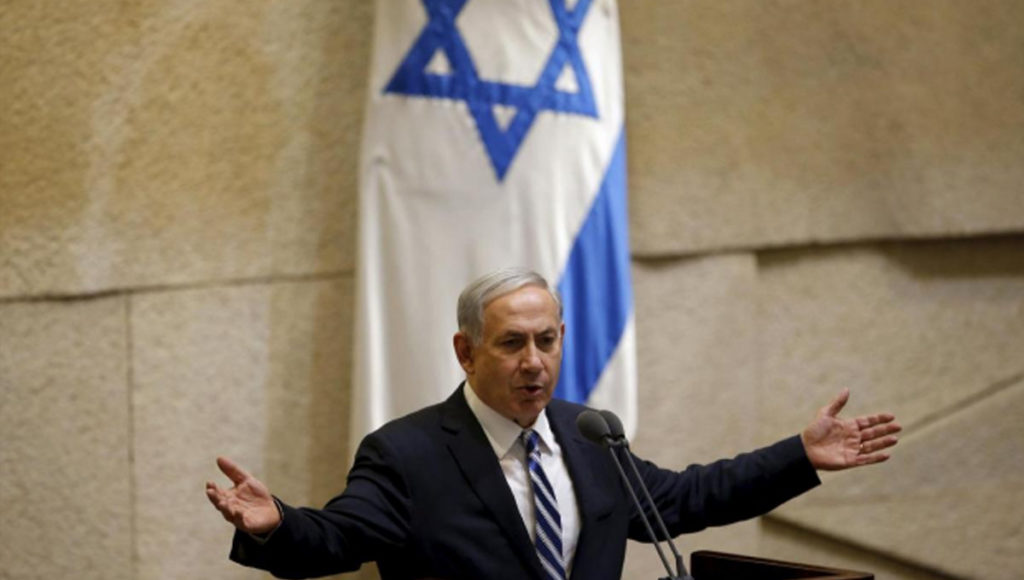 SHARMINI PERIES: It’s The Real News Network. I’m Sharmini Peries, coming to you from Baltimore. In the wee hours of the morning on Thursday, the Israeli parliament, the Knesset, passed a controversial law: the law of the nation-state. The Prime Minister Netanyahu pushed for this bill, which was originally proposed in 2011. The bill was passed just before the Knesset enters its summer recess. Now, the state of Israel does not have a constitution, but instead a series of basic laws which form the foundation of the Israeli legal system. This Basic Law will declare the state of Israel as belonging to the Jewish nation, and will set Hebrew as the only official language; and it will put the concept of the Jewish state above the concept of democracy. The joint Palestinian and Jewish opposition party, the United List, wrote an alternative bill last month calling for a democratic state with equal rights to all its citizens. But in a surprise move, the Knesset Presidium has banned the bill from being brought to a vote, explaining that the bill threatens Israel’s existence as a Jewish state.

Now, the Presidium has only banned three bills in the history of Israel. Here is how Netanyahu presented the law just a day before the vote.

SHARMINI PERIES: What is this all about? Now, Prime Minister Netanyahu has had four electoral victories for prime minister. But for this upcoming election he has very little to run on. So does this law, passed at wee hours of the morning without much debate, have anything to do with that? Well, joining me now to discuss all of this is Shir Hever. He’s our TRNN correspondent based in Heidelberg, Germany. Shir, good to have you with us.

SHIR HEVER: Thanks for having me, Sharmini.

SHARMINI PERIES: All right, Shir, let’s start with what this bill is all about. Why it’s being introduced at this time, and very, very little debate has taken place. But Netanyahu managed to push it through.

SHIR HEVER: Well, actually, there was a lot of debate taking place when the bill was first introduced in 2011. And there was a lot of opposition, because the bill is very antidemocratic, and it changes the balance, the very delicate balance, that the Israeli government has tried unsuccessfully to maintain since the founding of the state between the concept of having a Jewish state and having a democracy. And in truth, Israel was never a democracy. But it could always pretend to be. And the problem with this bill is, for the Israeli parliament and for the Israeli government, is that the pretense is gone. Now it’s very clear that Israel is a Jewish state first, and a democracy later, if at all.

And that’s really what this bill is all about, because it doesn’t really change much in terms of the legislation. It mainly focuses on symbolic issues. And the fact, for example, of declaring Hebrew as their only language, or the only official language, is again all about the symbolism. It’s not so much about how the government practices are about to change. But it’s a clear statement to the citizens of Israel who are not Jewish, you are now second class citizens. And it’s a clear statement of the world, Israel is a Jewish state first and it’s only a democracy in as much as the supremacy of the Jews is not challenged.

SHARMINI PERIES: Now, the United List proposed an alternative bill here which would have ensured equal rights for all of the citizens of Israel. If this bill was so popular in the Knesset, why did the Presidium decide to ban it from a vote?

SHIR HEVER: I think what the United List did with their bill-. They also knew that this bill would not get a majority. If there was a majority in the Israeli Knesset to have a democracy, then Israel would have been a democracy by now. But they put this bill forward because they wanted to have that vote in the open. They wanted to have a list of all the members of the Israeli Knesset who raised their hand and voted against equal rights to all citizens. And of course, Israeli members of Knesset don’t want to raise their hand and admit that they are rejecting the idea of equal rights.

SHARMINI PERIES: Shir, in March of last year the U.N. published a report which accused Israel of implementing an apartheid regime. In fact, this bill does exactly that. Now, following this report that the U.N. had done, the U S had pressured that the report be censored by the Secretary General Antonio Guterres. And one of the most important issues in that report was this kind of separation between citizens and citizenship rights, and the national rights one has as a citizen of a country. Now, this new law, as I said, does exactly that. Do you think that this means that the U.N. report was just ignored by the Israeli leadership? And they must have known what’s in it.

SHIR HEVER: I actually think that the law was not passed back in 2011 but was passed now because of the U.N. report, and because of increasing accusations of apartheid. Let’s not forget that in South Africa during the days of apartheid, the government didn’t try to argue that there is no apartheid in South Africa. They were very open about it. And this is what we see in Israel, as well. They are being very open about it. They just don’t call it in the Afrikaans word, apartheid. They use the Hebrew word hafrada. But they amount to the same thing. And this is actually a law that has been passed out of fear. It has been passed out of fear that because of the Israeli propaganda aimed at the world to say such lies as Israel is the only democracy in the Middle East, and this is the kind of propaganda that makes Israelis worry, oh, maybe the non-Jewish citizens of Israel, the Palestinian citizens of Israel, will exploit this propaganda and say oh, you’re saying that you’re a democracy, so we demand equal rights.

So in order to respond to these accusations of apartheid, the answer the Israeli Knesset and the answer of the Israeli government is yes, we are apartheid. This is exactly what’s going to happen. We want to make sure that the state of Israel doesn’t belong to its citizens, it belongs to the Jewish people, wherever they may be. And the Jewish people are not necessarily citizens of Israel. About half of the world Jews don’t live inside Israel. But now the state of Israel belongs to them even more than it belongs to people who have lived in the land of Israel for many generations. But now their own country doesn’t really belong to them. And that’s really the very essence of apartheid.

SHARMINI PERIES: And in terms of the actual implications of this law, how would it change the way that people live in Israel and exercise their democratic will?

SHIR HEVER: Well, here I think it seems like the law is not going to change anything. Because when they say, for example, Hebrew would be the only official language, in practice Hebrew is the only official language. Israeli institutions and public institutions refuse to use Arabic, which used to be an official language of Israel until today. And they insist on speaking Hebrew and publishing everything just in Hebrew. And there is also a clause in this law that says that the government will promote Jewish communities, or Jewish settlement, which is another form of apartheid; Jewish-only communities, Jewish-only settlements. And that’s also something that has been done for decades, and it’s nothing new. The fact that now it appears in the law is just a way of the government to say this is our policy, and we’re going to continue it and not, no longer try to pretend as if we are actually a democracy where Palestinians can also have their, their communities supported by the government.

So in that sense, I don’t think there’s going to be a lot of change. But I do think that this kind of very aggressive discourse that the government is bringing, openly calling for Jewish supremacy and for racist legislation, is something that affects the whole political discourse in Israel, and the whole atmosphere. When Palestinian citizens are told you have no hope, you were born Palestinians, you’re not born Jewish, so you will never be equal in this country. Then, of course, they understand that their only way for equality is through resistance and protest. They cannot hope that one day their rights will be bestowed on them. And that is a big difference.

And I think with this new-. Or not new, but certainly intensified sense of racism and discrimination it’s not surprising that we see a lot of other laws popping up on the, on the outskirts. And while everyone was talking about the law of the nation as the main legislation move of the current government, they just legislated some other laws very quietly, one of them which denies the rights for homosexual couples to adopt. And the other is a law that prevents Palestinians from appealing to the Supreme Court. So they will be only, only be allowed to appeal to regional court. And that is intended to prevent them from demanding compensation when their property or lives are damaged or destroyed by the Israeli military. So this is actually how this law is changing the lives of people living in Israel and Palestine.

SHARMINI PERIES: Devastating law, enshrining that Palestinians will remain second and third-class citizens in Israel. Shir, I thank you so much for joining us today.