On Reality Asserts Itself, Prof. Alexandr Buzgalin says while Putin heads a powerful state, this is not a system of one man rule; more than 100 billionaires and a stratum of top bureaucrats have political power - with host Paul Jay

On Reality Asserts Itself, Prof. Alexandr Buzgalin says while Putin heads a powerful state, this is not a system of one man rule; more than 100 billionaires and a stratum of top bureaucrats have political power - with host Paul Jay 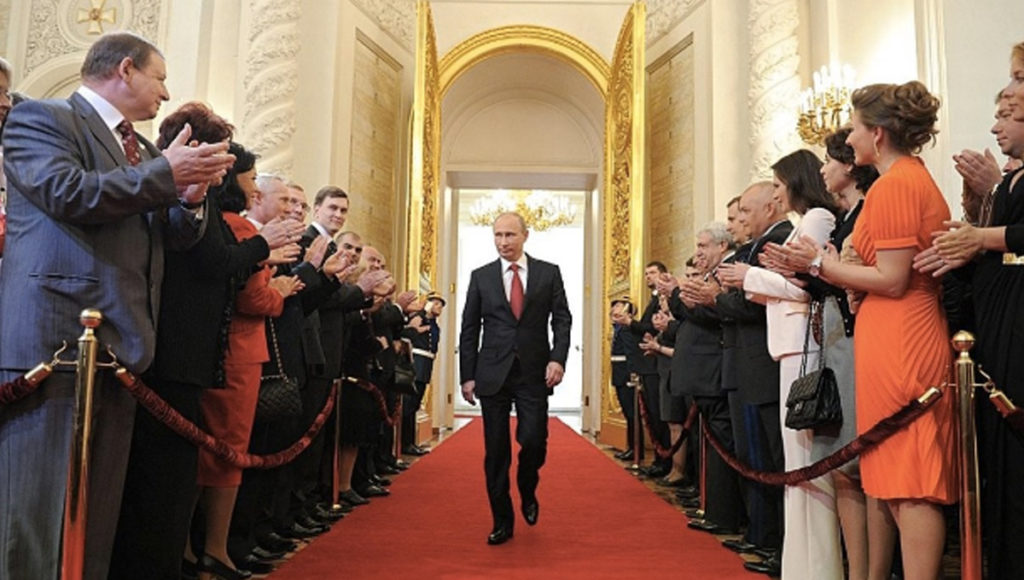 PAUL JAY: Welcome to the Real News Network, welcome to Reality Asserts Itself, I’m Paul Jay. As you can see, we’re continuing our discussion in a new studio, but we’re still in New York City with Dr. Alexander Buzgalin.

PAUL JAY: Professor Buzgalin teaches political economy and is director of the Center for Modern Marxist Studies at Moscow State University. So, we’re going to pick up where we left off. You go on vacation for a lovely little August and you get away from it all, and you come back, you’re on the central committee, youngest member, I guess, maybe in history, I don’t know, of the communist party. You’re amongst the most powerful people in the county. And certainly, for decades and decades, the Soviet State looked like it would never go anywhere. And you come back from vacation and there’s no more Soviet Union.

The Communist Party, I think, is probably illegalized at this point. Yeltsin is the president, and so that’s kind of where we left off the story. We went a little bit further, we talked about the story of the next decade and the grab for cash, the emergence of the oligarchs and the many who came from the party itself and from the state bureaucracy. And we get to the end of the ‘90s with a fairly established class of now billionaires or becoming billionaires, and a very chaotic state. And Putin becomes the new leader, and that’s sort of where we left off.

The sort of common narrative of this period after Putin becomes leader is that this is the story of the rise of a one- man dictatorship. And this is what the story of this whole next period of the Russian state is. What do you make of that?

PAUL JAY: So, Putin advocated more of an integration with the Western capitalism.

ALEXANDER BUZGALIN: Yeah, Putin advocated, he became- I would say, in the modern sense of this word. Only after crisis, 2007, 2009- before, it was only some elements, some trends, maybe. And about democracy and dictatorship. In that period, we had growth of statism, but mainly in ideology, growth of Russian conservatism, but mainly in ideology, and it was not so strong. It was domination of liberal ideas before crisis, world crisis, 2007-2010. That was the trend. And it was, I want to remind, period when we had enormously high prices on oil and gas. It was up to one hundred fifty dollars per gallon. And Russia had an enormous amount of dollars for really nothing. And it came, it led to the enormous enrichment of oligarchs, but also some resources came to workers in budget sector, education, healthcare, to bureaucracy. It was enormous growth of bureaucracy and a little bit for ordinary workers and peasants.

PAUL JAY: And we talked earlier, in the previous segment, about even most of the oligarchs, as in medieval times, realized there needed to be a king because the competition between the oligarchs would threaten the systems of the oligarchs, and they needed a state to play that kind of role. In terms of Putin and the role of that state, there’s a perception, again, in the West, that it kind of gets used in a way that enhances Putin’s power in a sense that he can favor these oligarchs, and disfavor those, and a sense the state becomes more important than the oligarchs.

ALEXANDER BUZGALIN: It’s true and not true. If any oligarch, and billionaire- and in Russia, we have hundreds, more than one hundred owners of more than one billion dollars.

ALEXANDER BUZGALIN: Yeah, and the country is not so rich as the United States or China, it’s ten times, maybe, not less than ten times- many times less than the United States or China. So, if any from these oligarchs will decide to attack rules of the game or personally, president and his team, he will be in prison or he must immigrate, and so on. But that doesn’t mean state became more important than class of oligarchs and top bureaucrats. First of all, it is not even class, it is strata inside class of bourgeoisie. We have very diversified class of bourgeoisie, very different types of bourgeoisie. And inside ruling strata, new nomenklatura is name which Voslenski used for Soviet bureaucrats. And now it’s very similar. A few thousand people with families, kids and so on, who are real rulers who concentrate economic and political power.

ALEXANDER BUZGALIN: Yeah, executive power. They control ruling party, administration of president, and they control main part of wealth of Russia. Seventy percent of Russian wealth is concentrated in the hands of less than one percent of population.

ALEXANDER BUZGALIN: And key resources in the hands of a few families, one hundred, two hundred families. So, the problem is that they have common interests, but they have clans, like in, I don’t know, court of Louis XIV or XV in France, different clans of aristocracy fighting between themselves. But generally speaking, it is one power, one strata of aristocrats who has power. The same in Russia. We have different clans, regional clans, clans that have connected with military-industrial complex, with oil and gas, with small difference between state gas and oil corporations and private gas and oil corporations. But difference is small because top managers of state corporation are also oligarchs. And the private owners of private corporations are in the control of bureaucracy.

So, in Russia, state and private means not too much. It’s not very big difference, unfortunately. And they have common interests. And these common interests led to stagnation of the economy because the development can be realized only if big money from this capital, oligarchic capital, bureaucratic capital, will be used for investments in high-tech technologies. And it will be redistribution of power, not simply of money, but redistribution of power. It will be new, active class. Class of engineers, creators, business people, but business, productive business people, not speculators and those who take land from the oil. And they will lose their power. So, if we have not simply growth, but development, new quality of development, this strata will lose their power.

That’s why for them, it’s not profitable to change economic, social, tendrils of life, of rules of the game, better to say. And for other population, this is stagnation, and stagnation on the low level with very big social differentiation. During last decade, we had more or less the same. After crisis, 2007-2010, it was ten percent decline of production. Then, we had small growth after five years, more or less the same level as 2007, then minus two percent plus one percent, zero plus two percent, near zero. And then finally, after twenty- I will finish on this. After twenty-five years of transformation from so-called inefficient economy of Soviet Russia inside Soviet Union, we have only plus fifteen percent, twenty-five years and only plus fifteen percent.

ALEXANDER BUZGALIN: In production, yeah, gross national product. Less than one percent per year during twenty-five years, all zig zags. And the quality is another.

PAUL JAY: Well, that’s kind of a dramatic number because, given computerization and such, productivity and gross national product in the West has gone far, far higher than that.

ALEXANDER BUZGALIN: And if you compare with China, which had similar problems, but China had minimum seven percent per year, and an average eight point five.

PAUL JAY: So, what does this mean in terms of the life of working people and what their expectations were? Remember, in an earlier segment you were saying everyone thought, “Get rid of the Communist Party and socialism,” and everyone was going to have “capitalism without capitalists,” the utopia.

ALEXANDER BUZGALIN: Utopia, unfortunately. So, first of all, as I said, during first years of so-called market reforms, shock without therapy, we had terrible decline of production, incomes, and social differentiation. We received real poverty. And before, it was impossible. And poverty for not only lazy people, liberal dogma, but intelligentsia became extremely poor, workers became extremely poor. After this, high prices on oil, life became a little better. But what we have now- let’s move to modern situation. As I said, twenty million people from one hundred fifty, little less, in Russia, are living under the poverty level. And poverty level is ten thousand rubles. Ten thousand rubles is one hundred-

PAUL JAY: And how many people below that?

ALEXANDER BUZGALIN: We have twenty million people who has less than ten thousand rubles.

PAUL JAY: At this time?

ALEXANDER BUZGALIN: At this time. And this is continuation. Before, it was sometimes little less, sometimes little worse, but more or less the same. What is ten thousand rubles? It is one hundred sixty dollars per month. Of course, purchasing power of dollar is high, but if you want to buy normal equipment, you will pay even more than in the United States. If you want to buy bread, it will be a little less. So, that’s why it is poverty. Wage of majority of Russians, working Russians, is less than thirty thousand rubles per month. This is five hundred dollars. This is not poverty, but still, country is rich with oil.

PAUL JAY: The majority of people earning that wage.

ALEXANDER BUZGALIN: Fifty percent has less than five hundred dollars per month. And in the same time, we have one of the best, second or so place as far number of billionaires is concerned. Billions, not of rubles, but billions of dollars. And they are buying football teams, palaces, two hundred thirty meters long yachts, and so on. It is a country with such situation.

ALEXANDER BUZGALIN: This is big question.

PAUL JAY: So, we’ll talk about why Putin seems to remain so popular in spite of tremendous inequality of the society. So, please join us for the continuation of Reality Asserts Itself with Professor Buzgalin on The Real News Network.