Neither Ben Jealous nor Governor Larry Hogan support the protestors' call to abolish ICE, but advocates say it is time to stop Hogan's policies of criminalizing Maryland immigrants

Neither Ben Jealous nor Governor Larry Hogan support the protestors' call to abolish ICE, but advocates say it is time to stop Hogan's policies of criminalizing Maryland immigrants 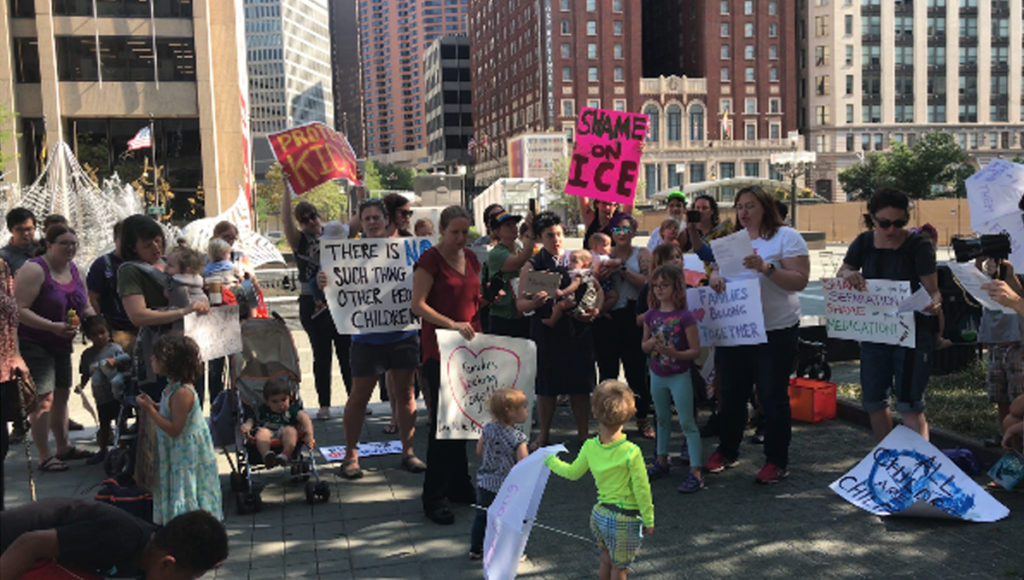 JAISAL NOOR: Outrage against President Trump’s immigration policies of separating families at the border have sparked protests across the nation. In Maryland, hundreds have taken to the streets in recent weeks to demand families be reunited. The daughter of undocumented immigrant Marta Rodriguez recently spoke at a rally against ICE in Baltimore this week.

YESSINA RODRIGUEZ: They told her that she has to leave from this country, that this is not her county. And it has been devastating news to all of us, because no one deserves to be separated from anyone.

JAISAL NOOR: While immigration policy is largely under the purview of the federal government, if widespread protests motivate voters, they could help propel Democrats to gain seats in Congress and in statehouses in the 2018 midterm election. In Maryland, Democratic nominee for governor Ben Jealous has been a vocal critic of Trump’s immigration policies.

BEN JEALOUS: What’s happening is outrageous. I tweeted out the other day, what Donald Trump and Jeff Sessions are doing on our border, it’s, it’s not just anti-civil rights or anti-human rights. You know, it’s, it’s un-American. It’s fundamentally un-American.

SPEAKER: Is there a point where you would send them back, considering that there’s some movement on a solution?

LARRY HOGAN: Well it’s, I’m encouraged that there’s some movement. But you know, a lot more has to be done. And you know, we’ve got to see what happens in Washington. Congress, the whole, everybody is responsible for not coming up with any kind of a solution.

AIMEE POHL: I will not be supporting Governor Hogan. Governor Hogan is-. What he’s doing is far too little far too late. And I’m supporting Ben Jealous for governor because I believe that he would actually take real steps for families in this state.

JAISAL NOOR: Thus far, Larry Hogan has declined to give us an interview. But a spokesperson emphasized that Hogan himself is a husband of an immigrant, and he’s the only Republican governor in the nation to remove National Guard troops from the border, and to express his opposition to the administration’s family separation policy.

But leading immigrant rights groups like CASA de Maryland have backed Jealous, citing his work fighting for the passage of the Maryland Dream Act that allowed undocumented immigrants to receive in-state tuition at public colleges and universities.

LYDIA WALTHER-RODRIGUEZ: He stood with us. He’s marched with us. He’s gotten arrested with us. People know him and people trust them. So we know we need a governor who will stop this separations from children, from family members. And we know that Larry Hogan has volunteered us into many programs which continue to separate our families here in the state of Maryland, and we can’t forget that, as voters. We can’t forget that. If we’re standing right now with children, if we’re standing right now with families not being separated, if we’re standing with the immigrant community, we should not be standing with Larry Hogan.

JAISAL NOOR: In an e-mail, a Hogan spokesperson emphasized that he supports immigration policies that target criminals. But critics say such policies only serve to criminalize immigrant populations.

He says he’s going after criminals.

JAISAL NOOR: Studies show that immigrant communities report fewer crimes when such policies are enacted. Foreign-born residents commit crimes at lower rates than those who are native born. The Hogan administration also released a letter that addresses some of the over 60 undocumented youth being held in federal custody in Maryland, saying they believe they should be reunited with their parents as soon as possible. But critics say the state can do more.

AIMEE POHL: The state and various counties have contracts with ICE. They could break those contracts, they can refuse to engage in those contracts until ICE lives up to certain basic humanitarian ways of treating people. So I don’t buy it.

JAISAL NOOR: Many of the protesters have called for abolishing ICE, something neither Hogan or Jealous say they support. But but they said Jealous would be more willing to listen to them over Hogan.

MIKE HACHEY: Larry Hogan has been an obstacle in the way of social movements fighting for progress. And when we compete, you know, when we fight in the electoral arena at the same time that we fight in the streets and in all other arenas, that’s when it adds into making advances in the movement.

JAISAL NOOR: Trust Act, which Hogan opposed, would have limited cooperation between federal and local authorities. Jealous says he does support the measure. Many also acknowledge that policies enacted by the George Bush and Obama administrations created the institutions like family detention that Trump was able to harness to fulfill his zero tolerance policies, but that the new wave of protests can be educational for those who have not been previously involved in the immigration debate.

The Real News will keep following this story. From Baltimore, this is Jaisal Noor.