How the Mainstream Media Ignores the Climate Change Crisis

The climate change crisis is real: more powerful storms, droughts, floods, and rising sea levels. However, mainstream media continues to ignore the crisis. A TRNN documentary on the lack of coverage

The climate change crisis is real: more powerful storms, droughts, floods, and rising sea levels. However, mainstream media continues to ignore the crisis. A TRNN documentary on the lack of coverage 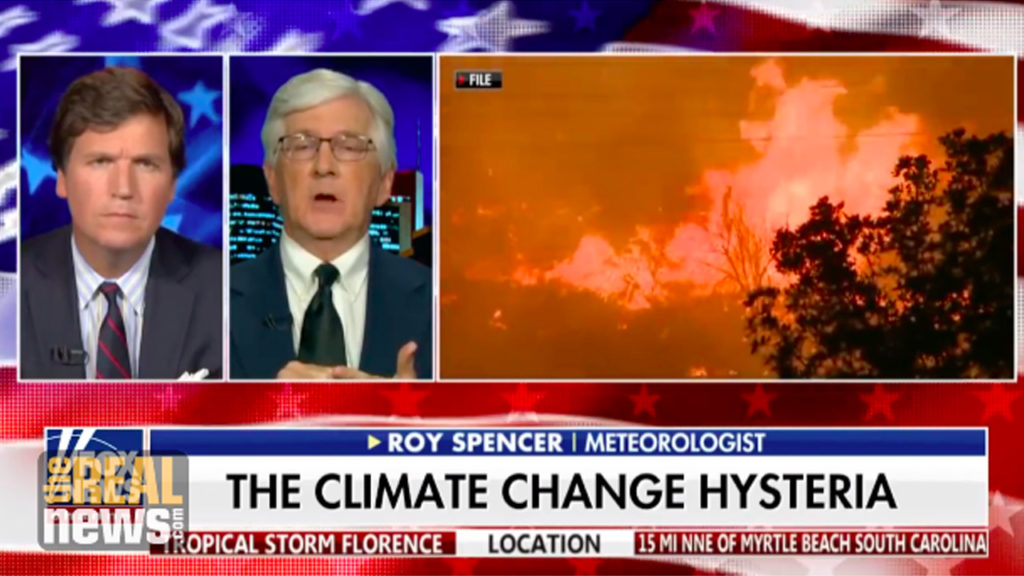 NARRATOR: In the fall of 2018, the U.N. Intergovernmental Panel on Climate Change held a press conference to announce a dire warning.

The pledges that governments have made over the last three years are not enough to keep warming below 1.5 degrees C.

NARRATOR: How did the mainstream media cover this ominous prediction?

LISA HYMAS: Monday morning after that we looked at the home pages of 50 top newspapers in the U.S. Less than half of them had that story on their home page. So most of them just weren’t giving it high billing.

NARRATOR: Lisa Hymas is director of the Climate and Energy Program at Media Matters for America, a liberal media watchdog in Washington, D.C.

NARRATOR: But 2018 was an alarming year on the global warming front. In the U.S. two powerful hurricanes slammed into the East Coast, while fires burned down almost 2 million acres of California’s forests. These disasters alone cost $54 billion in damages. Droughts hit Europe, Australia, South Africa, and Argentina, while floods struck Japan, India, and China, and more recently the American Midwest. Powerful cyclones recently leveled parts of Africa. 2018 was the fourth hottest year on record, with carbon emissions hitting a new high.

LISA HYMAS: The big picture is that the mainstream media are not covering climate change with the frequency and the intensity that it deserves. This is a major crisis, and it’s not being covered like a crisis.

NARRATOR: Moreover, Media Matters has done studies that reveal something else.

LISA HYMAS: The mainstream media too often doesn’t connect climate change to extreme weather events. So whether those are hurricanes, or wildfires, heatwaves, droughts.

MICHAEL MANN: So the problem isn’t so much that there isn’t any news coverage about climate change.

NARRATOR: Michael Mann is one of the world’s leading climate scientists. He works at Penn State University.

MICHAEL MANN: The problem is that we’re not seeing the sort of coverage that we should be seeing among the largest networks, the major nightly news programs, and cable news programs. This is the biggest threat that we face, climate change, and it should be the lead story on every news program.

NARRATOR: Instead, since 2016, now-President Donald Trump’s antics have dominated the news cycle.

MICHAEL MANN: Donald Trump’s latest silly tweet of the day is entertaining. But why does the media have to spend 100 times as much on that stuff as they do on the single greatest threat that we face?

LISA HYMAS: The media’s obsession with Trump definitely makes its climate coverage worse. A lot of the times when climate change gets covered it’s just around Trump. It involves something he said, or something he did, or a stupid tweet that he sent. So Trump really is distorting the coverage, and I think that’s just–the media just can’t get enough of this guy.

NARRATOR: Is the media’s spotty coverage of climate change why people aren’t more alarmed about the threat it poses?

LISA HYMAS: I think the poor media coverage of climate change definitely contributes to the problem that a lot of Americans don’t recognize how serious the issue is.

NARRATOR: Journalist Andrew Revkin has reported on climate change for more than three decades, including 21 years for the New York Times. Today he works for National Geographic.

ANDREW REVKIN: Meaning no new normal sea level for centuries to come. Meaning no easily predicted weather patterns. Meaning that your coastal vulnerability to storms gets really amplified by that sea level rise. So where we used to build houses, it will no longer be feasible to do that. That message is not really out there.

NARRATOR: While the New York Times is one of the best mainstream media outlets to cover climate change, Revkin says the topic was still often a hard sell to the paper’s editors.

NARRATOR: Yet newspapers and television have also been a convenient vehicle for the oil industry and its supporters to spread doubt and denial that global warming is real.

MICHAEL MANN: And the media, to some extent, has been complicit with that, playing to sort of the fallacy of false balance.

NARRATOR: A good example is the editorial page of the Wall Street Journal, the most powerful business newspaper in the world.

MICHAEL MANN: It’s a tragedy that the newspaper that reaches the largest cross section of our business community, the people making business decisions on a day-to-day basis, the Wall Street Journal, has used its editorial pages to promote climate change denialism and to sow doubt and confusion. And it’s difficult to actually estimate how much damage that has done.

NARRATOR: The Wall Street Journal’s bias is not surprising, given it’s owned by the billionaire Rupert Murdoch, who controls the most aggressive media empire in the Western world; an empire that includes Fox News. Fox News reaches 95 million U.S. households.

LISA HYMAS: I would say hands down in major media Fox News is the worst. They often have on climate denial. They have people who just dismiss the problem, make fun of the solutions. I mean, that’s not really a big surprise coming from Fox News.

MICHAEL MANN: There’s a large cross section of the American public that basically has been subject to this brainwashing by the Murdoch media empire. And it’s very difficult to bring them back into the fold on the side of science and reason.

MICHAEL MANN: They are so reliant on that fossil fuel money that one can’t help but suspect that that has led to a dilution and a dimunition of their willingness to cover this problem.

NARRATOR: Consequently, the media rarely investigates the power that fossil fuel industries hold over political systems around the world.

KEITH STEWART: One of the stories it’s really hard to get covered is just the political influence of the oil industry and how it’s affecting government policy.

NARRATOR: Keith Stewart is an energy analyst with Greenpeace Canada in Toronto.

I usually say it’s time to separate oil and state. Because in the way that the church and state used to be semi-fused, we now see that with the oil industry. You know, in the U.S. you’ve got the influence of the Koch Brothers, you’ve got any influence the American Petroleum Institute, Exxon Mobil, whose CEO was the first secretary of state for Donald Trump.

ANDREW REVKIN: I don’t think the mainstream media have ever adequately dug in to the influence that corporate America has had on climate policy.

NARRATOR: Another story the mainstream media gave little play to was how Exxon, going back to the 1970s, conducted extensive research on whether fossil fuels might cause global warming.

MICHAEL MANN: And in fact, you can find internal Exxon Mobil memos where their own scientists in the 1970s were referring to the threat of climate change as potentially catastrophic.

SPEAKER: Well, the New York attorney general filing a lawsuit against Exxon Mobil, accusing the multibillion dollar oil and gas company of defrauding its investors by downplaying the financial risk of climate change to its business.

NARRATOR: But the company hid this research from the public, and instead embarked on a decades-long campaign of denying the link.

LISA HYMAS: I think the media, the mainstream media, definitely is not doing enough to explain how the fossil fuel sector has caused the problem; has tried to conceal the problem.

KEITH STEWART: And it’s not part of the main reporting on the oil industry, where what we should be talking about is this is a sunset industry. It’s not going to shut down tomorrow. But it’s got to be shut down in the next–by, you know, by the midcentury if we’re going to have any hope of avoiding catastrophic levels of warming.

MICHAEL MANN: What I sometimes call the softer form of climate change denial, which is to not outright reject the scientific evidence, because that’s not credible anymore. People are seeing the impacts of climate change play out in real time on their television screens. So instead there’s been this move towards saying, well, it’s happening, but you know, we’re not sure how much of it is due to human activity. And it’ll probably be good for us. And by the way, it’ll destroy the economy if we do something about it. When the irony, of course, is that what will destroy the economy is not acting on climate.

MICHAEL MANN: If we had acted decades ago, our carbon emissions–the curve, bending down to the curve–would have been a bunny slope. We could have mildly sort of gently come down and transitioned away from fossil fuels toward renewable energy. Now, because of decades of delay bought by fossil fuel industry propaganda and a media that too often has wittingly or unwittingly played into their agenda of false balance and inaction, what that’s bought us now is a trip down the double diamond slope. We have to now bring our carbon emissions down dramatically over the next 10 years if we are to avert catastrophic climate change.