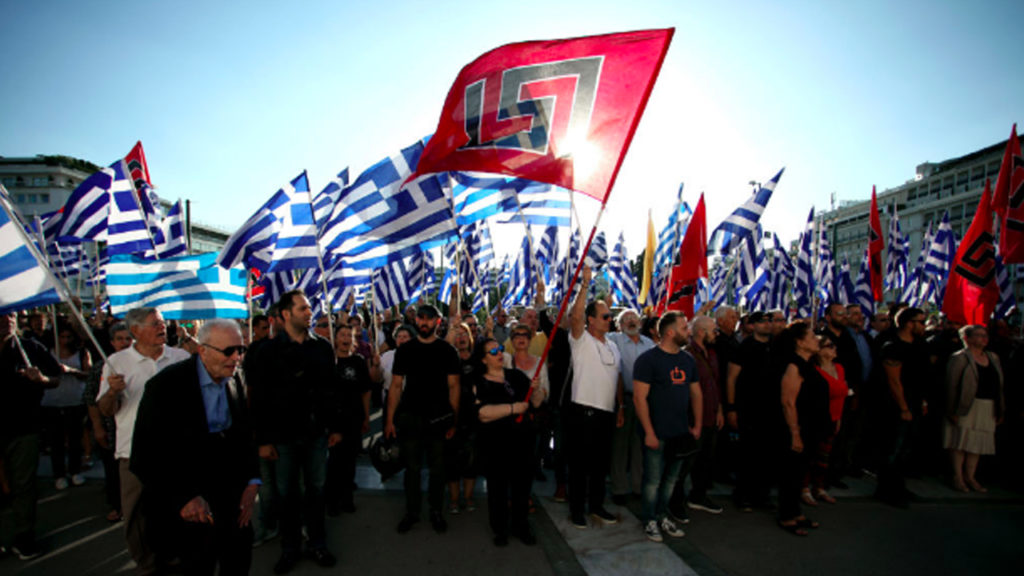 DIMITRI LASCARIS This is Dimitri Lascaris reporting for The Real News Network from Montreal, Canada. This is part two of our interview of Greece’s former Deputy Defense Minister, Costas Isychos. In part one, we talked about the election on the weekend of July 6th in Greece, which saw the right-wing New Democracy Party return to power after four and a half years of rule by the party described by many in the mainstream media as “radically left.” Namely, the Syriza Party of Alexis Tsipras. Thank you for coming back on The Real News, Costas.

COSTAS ISYCHOS It’s a pleasure to be with you again, Dimitri, and our viewers.

DIMITRI LASCARIS So, Costas, in this part I’d like to talk about three aspects of this election which have been less prominently discussed in the media than the overall result— you know, the removal of Mr. Tsipras and Syriza from power and the return of New Democracy. The first of those issues is the Golden Dawn Party. This is this virulent neo-Nazi party that gained, as I’m sure you know, 7% of the popular vote in the last election in September 2015, and thereby became the third largest party in Greece’s Parliament. It only gained, however, 2.93% of the votes in this election and failed to clear the 3% hurdle needed under Greek electoral law to secure seats in Greece’s 300-member Parliament. Why do you think that happened, Costas?

COSTAS ISYCHOS Well, I think the main reason is that this neo-Nazi party— which is probably the most open neo-Nazi party in Europe, the most nostalgic of the Hitler era— is a party which has been accused, rightly accused, of a very famous young rapper and artist and singer in Greece three and a half years ago, Pavlos Fyssas, a 30-year-old young person who was brutally knifed by a Nazi gang in an evening in a coffee shop. Now, the leaders of Golden Dawn admitted that they were morally responsible for the murder of this young person, calling him garbage. And well, I think that the people of Greece realized that you cannot have Nazi murderers and Nazi thugs in the Greek Parliament, especially when all over the world Greece is known as the birthplace of democracy. You can imagine how many Greeks felt when this Nazi Party was the third party in power in the parliamentary seats with 7%.

Now this is a positive accomplishment of this election, but we must take into account that many of the votes of this Nazi Party, Golden Dawn, went to another extreme right-wing party which does not call itself openly Nazi or openly neo-fascist. But it’s a very racist, anti-immigrant, anti-economic refugee party, which is calling for a “clean Greece.” A clean Greece— which, of course, means a Greece without foreigners, without economic refugees who are looking to escape from death and from war in their regions. This party is called the Greek Solution led by Mr. [Kyriakos] Velopoulos. This party entered the Greek Parliament with 3.7%. If you put that, plus the 2.9% of Golden Dawn, and you put also about four or five digits more of smaller extreme right-wing parties, the extreme right-wing, the neo-fascist right-wing, and the neo-Nazi right-wing in Greece has more than 12% for those parties who entered parliament and for those parties who are not able to enter parliament.

So the extreme right-wing is still growing in Greece. It’s favored by the systemic media. It’s portrayed as a new lifestyle for young, uneducated youth who live in poor ghettos in Greece and in Athens and Thessaloniki who really have no historical memory of what Nazism was in this country, what it meant, the Nazi occupation meant for Greece with more than 400,000 people dying of hunger and another 300,000 dying as partisans for more than five years in the Greek mountains fighting the Nazis. So it is positive that they’re not in parliament, but we have to take into account that these ideas are still growing and are very favorable in a region and in an area in a social context where neoliberal policies are creating more unemployment, more misery, and more emigration. So the anger sometimes transmits into these extreme right-wing parties who represent a real danger for social peace, and social growth, and progressive ideas.

DIMITRI LASCARIS So, Costas, another significant development, a new development in this particular election, was that the MeRA25 Party won seats in Greece’s Parliament for the first time in its history. It earned 3.4% of the popular vote, giving it nine deputies in the 300-seat parliament. This is the Greek wing of the new pan-European DM25 Party led by Greece’s former Finance Minister in the first Syriza government, Yanis Varoufakis. How do you account for the fact that Mr. Varoufakis was able to break through the 3% threshold? And how if at all do you think his party’s electoral success in this election will affect Greece’s political landscape?

COSTAS ISYCHOS Well, I answered before that one of the positive accomplishments of this election was that we have no more of the Golden Dawn Party, the neo-Nazi party in parliament. On the other hand, we have the appearance of a new center-left or progressive party led by Yanis Varoufakis. It’s very early to say what the political landscape will be. It’s very early to say what his positions will be in parliament according to the very tough austerity measures and anti-social measures, which will be presented by Mr. Mitsotakis who will cut back on health, education, and other social policies— hurting more and more, the youth and the unemployment. Mr. Varoufakis was able to break the 3% barrier because he was able to get back a lot of disappointed Syriza voters who felt that he had perhaps an agenda that takes them back to the summer of 2015 when that new spring opened in Greece, a new window of opportunity opened for progressive policies to perhaps be conquered and implemented in Greece, especially before and after the referendum of the 5th of July.

He was able to convince voters that he is an alternative to Syriza, which of course has become now and is becoming more and more a conservative party of the center-left and center-right perhaps. Mr. Tsipras has already announced that in the next few months, he will hold the Congress and his party will be mutated into something else— not any more of the radical left party even in title or in content, in words, and rhetoric. But it will be now a center-right, center-left party, a social democratic party like the SPD in Germany or Mr. Macron in France and so on, which we already know what these parties represent the policies of neoliberal implementation. Mr. Varoufakis will perhaps be an effective opposition, or he will not. It will have to be proven. I think we have to wait for the next day to see what Mr. Varoufakis is going to achieve in the parliament with a very difficult opposition where Syriza is trying to present itself again as the only alternative to Mr. Mitsotakis.

I hope and I believe that the reconstruction of a democratic movement or the left movement— which will be against war, pro-peace movement, a movement of dialogue, a movement for real dignified jobs for the youth, for real social policies and health and education— can be achieved. It remains that if Mr. Varoufakis will be part of that unified left, or he will try to follow as his predecessors again, as the only successor of the alternative. There is no alternative of unity in the left, especially of the movements. It will be more disintegration, less hope, more despair for the young people who will resist in voting. We had almost a 45% abstention of youth between 17 and 25-years-old, which is one of the highest in the country. The youth are turning away from democratic participation and voting. They see no real hope, so if we don’t convince the youth that there is hope, there is an alternative— unity and participation on reconstruction of our society— we can do it. We have to wait where Mr. Varoufakis will present as an agenda the next day in the parliament. We’ll hope that it will be a favorable situation. We hope that it will not be a Syriza number two that we lived through in 2016 until today.

DIMITRI LASCARIS Well, we’ve been speaking to Costas Isychos, the former Deputy Defense Minister of Greece under the first Syriza government. Thank you again for joining us on The Real News, Costas.

DIMITRI LASCARIS And this is Dimitri Lascaris reporting for The Real News Network.

Greece Exits its Bailout but Remains Shackled by Debt and Austerity