A UAW union member and truck worker from Flint discuss the challenges of dismantling the two-tiered GM employment system and how workers are holding firm with community support.

A UAW union member and truck worker from Flint discuss the challenges of dismantling the two-tiered GM employment system and how workers are holding firm with community support. 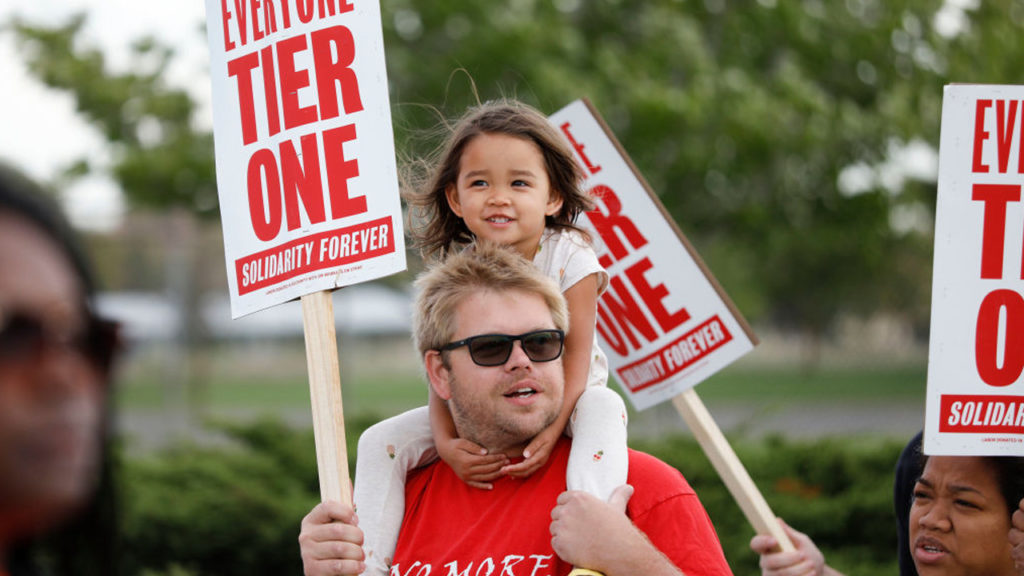 The General Motors UAW strike has entered its fourth week now, and according to insider reports, there are still some major sticking points in the contract negotiations. Meanwhile, striking workers are feeling the hardships of a strike income that is only a fraction of what they normally make, $250 per week compared to an average salary of $1,200 per week. The strike has shut down 30 GM factories across the United States as well as Canada and Mexico, where parts shortages have led to shutdowns. According to some estimates, 150,000 workers are idle; including part-timers, temporary workers, and full-time employees. This week for the first time, union and company negotiators were up almost all night Wednesday to Thursday to hammer out the last sticking points, which involved job security and the union’s demand to reopen factories in the United States.

Joining me now to discuss the state of the GM strike and what it means for workers is Sean Crawford. He’s a fourth generation union member and auto worker who works at the Flint Truck Assembly. Thanks for joining us today, Sean.

SEAN CRAWFORD: Thank you for having me.

GREG WILPERT: Let’s start with how the strike is going from the worker’s perspective. It’s been almost four weeks now. How are the workers seeing it at this point? How is morale?

SEAN CRAWFORD: Every time I’ve been out on the line, everyone’s been incredibly positive, and I think the reason for that is because people see the ultimate goal at the end of this strike, right? They’ve seen their brothers and sisters being exploited as temporary workers. They’ve seen their brothers and sisters have their jobs outsourced to third party companies in the very same plant that they were, with different contracts with lower pay and lower benefits doing jobs that they used to do that were pretty much slated just for high seniority folks. They see the exploitation of second tier workers as well. These are all things that we see day in and day out, exploitation of the working class by corporate America. And because we have that in our hearts, we want to see economic justice. I think morale is pretty high, because people know it’s worth it, you know?

GREG WILPERT: Now in terms of the negotiations, you already said that the main issue is this gap basically between temporary or contract workers and the full-time employees. Do you think that, or as far as you know, has there been progress on this issue, and are there any other issues that you would highlight as being key to these negotiations?

SEAN CRAWFORD: Well, there are a lot of important issues. There are issues in job security, there are issues of health care benefits. But I think overall the most important issue is equality, because if you’re not equal and functioning as a unit you can’t go forward as a unit. You can’t demand better things for everybody. When you’re divided, it creates resentment. It creates division within a union, and the entire point of having a union is coming together. That is your strength as an organization. To me that’s the number one issue, so we can actually move forward together as equals. And I think also that we’ll have another side effect as well, because it will… You know, obviously a lot of folks know about what’s happening in the South. We haven’t been able to organize a lot of the plants down South, and I think when they see us doing what’s right in making second tier and temporary workers full, it will be much more appealing to join the UAW. We will probably have a lot more success in our organizing efforts.

GREG WILPERT: Now, unionization in the United States is actually at an all-time low. Compared to the early 1980s, it was around 20% of the workforce, and now it’s about half that at 10%. how do you see this strike impacting the state of unions and of organizing in the United States at the moment?

SEAN CRAWFORD: Well, you just have to look at history. Say for example if you go back to the ’36, ’37 Flint sit-down strike, after we won union recognition here in Flint, it set off a wave of sit-down strikes across the country and even across the world, and that was a momentous event. People want to see wins for other working people, and it can be extremely inspirational for other members of the working class, not just in the auto industry, but many industries. It doesn’t matter if you’re a teacher or a professor or a nurse or a fast food worker. Everyone who trades their time for money, everyone who is a working class person deserves it. And I think a big success could really inspire a lot of people to join and fight for their own rights as working people.

GREG WILPERT: Now, of course the business media and the business-friendly analysts are blaming unions for General Motors’ economic difficulties, saying that the unions are making GM cars too expensive. For example, they’re pointing out that the strike is costing GM $450 million per week. We actually have a clip here from Fox News that talks about this.

SPEAKER 2: Well, I agree with you. Because their number one selling vehicles; the trucks, the Silverados and the Sierras, they’re not… They’ve got a truck sale going on right now. So within two weeks they’re going to be hurting the golden goose.

GREG WILPERT: So Sean, what’s your response to these types of arguments that we hear in the business media?

SEAN CRAWFORD: Well, first things first. I noticed that they mentioned the parts suppliers, right? The idea that oh, people are going to be getting laid off in other industries and from other companies as a result of the strike. That’s just another aspect of the divided contract strategy. You don’t need to pit one group of workers against another. Those folks and these parts suppliers, they should be walking out with us. We need to expand the strike. We need to expand worker power. These are the very things that are necessary for us all to have a better quality of life. And so you see they’re trying to pit worker against worker here. They make no mention of people like Barra who are making $22 million a year at our expense, right? So not only do the taxpayers bail the companies out here in the U.S. and in Canada, but we’ve been taking concessions for 30 plus years.

You know, they act like we’re living so high on the hog. We just have a reasonable lifestyle where we can actually take care of our families. We’re not out here like these CEOs of these huge companies that are making millions and millions of dollars. Where is the anger against them? We need to be working together as workers, as working class people, and have an analysis that encompasses everybody. Because as we come together, we gain more power. This needs to happen in all industries and in all countries, and that’s how we can all get a better quality of life.

SEAN CRAWFORD: Well, there’s a lot of community support. A lot of local companies, for example, they understand that we’re on strike, so they’re allowing us to defer payments on certain things. We’ve been getting a lot of donations from the food banks of Southeastern Michigan here in this local area, and we’ve just been getting a ton of community support. Personally, I’ve been saving up for a strike since the beginning of the year, so my family and I were well prepared because we know the benefits of the wages that we won didn’t come without a fight. With that understanding, I think a lot of people have been preparing for this, and yeah, I think we have to hold on as long as it takes.

GREG WILPERT: Okay. Well, we’re going to leave it there for now. But we’ll continue to follow the strike, of course. I’m speaking to Sean Crawford, UAW member and auto worker at the Flint Trunk Assembly plant. Thanks again, Sean, for having joined us today.

The Autoworker Strike Is Over. Did GM Just Win?