The U.S. continues to dominate the worldwide arms market, selling far more than any other country in the world, to over 100 countries. Meanwhile, Saudi Arabia's arms imports have tripled, according to SIPRI's latest report

The U.S. continues to dominate the worldwide arms market, selling far more than any other country in the world, to over 100 countries. Meanwhile, Saudi Arabia's arms imports have tripled, according to SIPRI's latest report 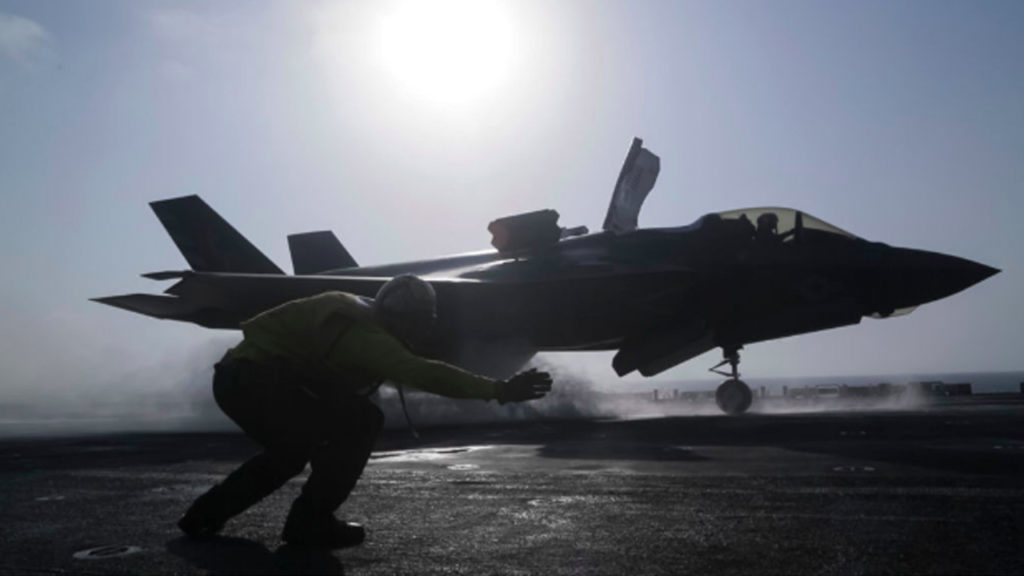 The Middle East has increased its arms imports by a whopping 87 percent in the last five years relative to the five year period before that. Most of these arms were purchased by Saudi Arabia, which is the world’s largest arms importer. The world’s largest arms exporter remains that the United States which has increased its share of the world’s arms trade from 30 to 36 percent during the period of 2014 to 2018 relative to the five years before that. These are just some of the findings of the Stockholm International Peace Research Institute, also known as SIPRI, which recently released its annual Trends In International Arms Transfers Report.

Joining me now to discuss the report in further detail is Pieter Wezeman. He is a senior researcher at SIPRI and co-author of the report. Thanks for joining us today, Pieter.

PIETER WEZEMAN: We assess, based on our specific methodology, that the United States counted in the past five years for about 36 percent of all arms exports in the world. And it has a significant lead over the next largest arms exporter in the world, which is Russia, which account for roughly 21 percent. So that’s already a big gap. And if you go to the next largest, which is France, we talk about a percentage of about 6-7 percent of the world’s share. So the U.S. really has the lead, and has advanced its lead.

GREG WILPERT: What can you say to us about the types of arms that the U.S. is exporting? Is there anything that predominates or is notable, especially in terms of the increase in exports?

PIETER WEZEMAN: I think what’s very important to mention there is the fact that the United States is especially strong in the export of advanced combat aircraft and all the munitions that go with it. So all the air launch cruise missiles and guided bombs, all those kind of things. That is one of the main strengths. Where it’s not very strong in, for example, export of naval equipment, frigates or [water]ships, or for example it does not export submarines. But it’s especially in the area of combat aircraft, and also in the area of advanced sensors, like radars and air defense systems, and missile defense systems. Also there the United States plays the leading role in the world.

GREG WILPERT: Now, Israel and France are the other two countries that have significantly increased their arms exports. France increased exports by 43 percent, and Israel by 60 percent. Now, one should note, though, that they still have–like you said already, they have a far smaller market share than the U.S. But what can you tell us about what has been driving their exports?

PIETER WEZEMAN: I think on the side of these states you see that it is a combination of industry heavily supported by the governments in those countries. So in the case of France, we see that the French authorities have really helped the French arms industry to promote its wares everywhere in the world. They weren’t so successful in that, let’s say, 10 years ago. It was a bit of a slump in French arms exports. But that has changed a lot. They’ve really found some major clients, especially in India. And somewhat surprising, also, a new client Egypt, which has bought some pretty significant equipment from France over the past five years.

Israel is a different case, again. It’s a very small country, and therefore somewhat surprising that it figures amongst the largest arms exporters in the world. Also there we see that it’s the state together with the industry which really promotes the arms. And Israel really hit the jackpot when they managed to convince India that Israeli military hardware is really good, and that they’re also willing to share this technology with India. Not just selling the whole system, but also the technology, so that India can make that equipment by itself, or at least assemble it. And India has become a really big market for Israeli arms in recent years.

GREG WILPERT: Now let’s turn to the import side of the equation. As I mentioned in the introduction, Saudi Arabia has been the world’s largest arms importer, now nearly tripling its arms imports in the five year period of 2014 to 2018, compared to the previous five year period. It now has 12 percent of all arms imports. What can you say about what has been driving their imports?

PIETER WEZEMAN: It’s a combination of factors, but I think the most important part of that is the fact that Saudi Arabia wants to be a regional power in the Gulf, or even in the Middle East as a whole. And at the same time it sees primarily Iran as a regional rival, a country which also wants to have that position. And of course it has a bit of a wary eye also on smaller states, particularly on Qatar, which is very small, but also wanting to play a major role. And all those things together seem to have led to Saudi Arabia increasing its arms imports even more than it had already in the past. And I think an important finding there was also that Saudi Arabia is not just buying arms; they are also actually using them. And particularly in Yemen, for example. They have also used them in Syria.

GREG WILPERT: Now, in the Middle East, the other major increases were in Israel, Egypt, Oman, Iraq and Qatar. All more than doubled. And they’re are all, as I said, in the Middle East. What do you see as being the reasons and patterns behind these increases?

PIETER WEZEMAN: They’re very diverse. So in the case of Qatar, also, they want to–it’s a very small state, but still they want to play a major role in the region. They didn’t want to do that before approximately 2010. But then it completely changed. They started to play that role. There was a very angry reaction to that in 2017 from the side of Saudi Arabia and the UAE. But that together that led Qatar to invest heavily in a large amount of new arms. So a very small state which is really expanding its arms forces to that of a medium-sized state.

Israel is a completely different story. Israel is interested in defending itself. It is a very small country which always has felt threatened by its neighbors, and also by nonstate groups such as Hezbollah. And so they have really invested heavily already for a long time in a very strong military capability, and we see that they’re now in yet another cycle of buying new very advanced equipment; more advanced than any one else in the region really has.

Egypt, it’s a bit of a question what happened there, because we see that the economy is in a slump, but at the same time they’ve stepped up their arms procurement. Partly it has to do with conflict ongoing in Egypt, in Sinai, and also the sanctions towards certain groups which are coming from Libya. But there are also other things which maybe are ongoing there. It might be that arms procurement is part of the–of how the military in Egypt wants to to establish or to continue itself as the major power in the country.

GREG WILPERT: Now, since 2000 there has been a steady rise in the arms trade. Are there any indications as to what has been driving the steady upward trend globally?

PIETER WEZEMAN: It’s such a diverse picture. In some parts of the world we’ve actually seen a decrease; for example, in Latin America over the past few years we’ve seen a clear decrease in arms imports related to, for example, the fact that Venezuela now has an economic crisis and cannot really continue its last arms imports, which had been ongoing for a period around 10 years ago. But elsewhere in the world we see several parts where there are clear threat perceptions which drive these things. But again, they are diverse. In Southeast Asia, there’s apprehension towards China. In India, arms exports have gone down now a little bit, but they will most likely go up again because of a threat perception towards Pakistan, and China, too. In the Middle East–well, we’ve just discussed that. But in Europe we see also an increased demand for arms due to an increased threat perception towards Russia, Russia having annexed part of Ukraine, and having also taken a number of other actions which really have led to European states being concerned and looking for more arms, which often they have to import.

GREG WILPERT: OK. Well, we’re going to have to leave it there for now. I was speaking to Pieter Wezeman, senior researcher at the Stockholm International Peace Research Institute. Thanks again, Pieter, for having joined us today.