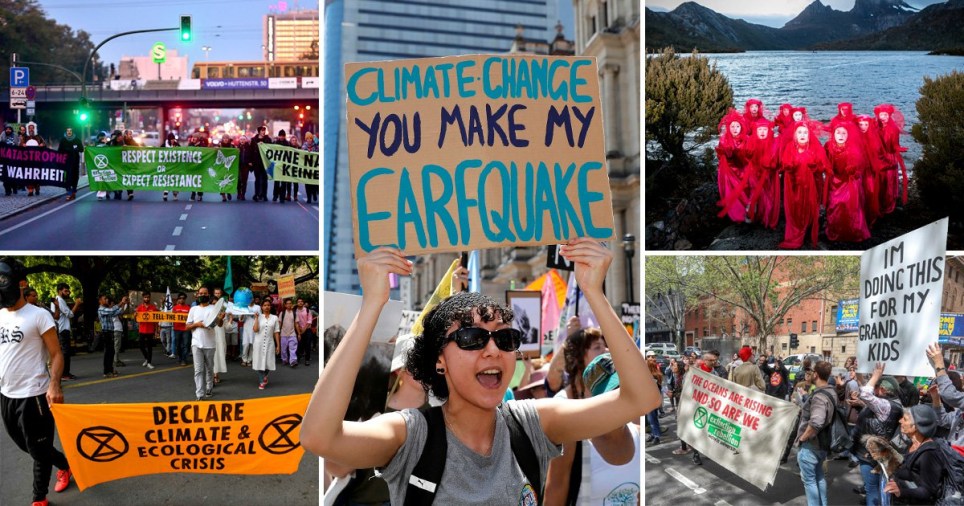 JAISAL NOOR: This is The Real News and I’m Jaisal Noor.

Extinction Rebellion. Mass protests in dozens of cities including London, Sydney, Amsterdam, Paris, Berlin and New York are all calling for immediate action against climate change. 500 have been arrested in London alone this week, as protestors have gridlocked city traffic, setting up tent cities as part of a two week civil disobedience campaign. On Wednesday, dozens of breastfeeding mothers holding up their children in their arms shut down traffic in central London. This is one of the protestors, Sally Davies.

SALLY DAVIES: I’m concerned that she won’t have a future. I mean, most immediately living in London I’m concerned about the fact that the terrible air quality will be affecting her lungs, but that’s just one small piece of the puzzle. I think that it’s not just her generation, but her children, what kind of planet are they going to inhabit, what sort of opportunities are they going to have? So I couldn’t forgive myself, I won’t be able to look her in the eye when she’s older if I didn’t come out and do something.

JAISAL NOOR: Dozens or even hundreds more have been arrested in protests around the world. Over the past year the grassroots movement has turned into a force to reckon with, using direct action aimed at shaking up the status quo. Activists have chained themselves together, glued themselves to streets, buildings and subways, all to demand governments protect the environment. This is another protestor, Caroline Risdon.

CAROLINE RISDON: What worries me the most is that she won’t have, or neither of them will have, well, the full range of flourishing Earth to enjoy really. And I come from South Africa, and I think countries that are developing are disproportionately affected by climate change. So if we have the authority and the power to exert some change here in the West, then we ought to do that for the benefit of all.

JAISAL NOOR: Among those arrested Wednesday in London was a 91 year old supporter of Extinction Rebellion. Thousands of climate change activists also blocked traffic at two main squares in Berlin this week, kicking off a week of protests intended to force the German government to take more drastic measures to protect the environment. This is German Sea-Watch 3 Captain Carola Rackete.

CAROLA RACKETE: As Extinction Rebellion, we demand that net emissions be reduced to zero by 2025 as part of an emergency program, as well as an immediate halt to the loss of biodiversity. What we also demand, and this is the interesting part, is that there be a citizen’s gathering which votes on the necessary measures. Extinction Rebellion will never make concrete policy proposals, we are saying the issue has to be handed back democratically to the citizens who then decide on the measures together.

JAISAL NOOR: On Monday, activist Greta Thunberg joined the global climate protest from South Dakota. The 16 year old made a surprise announcement, she joined a local march when she visited Native American reservations to meet with activists who fought against the Dakota Access Pipeline, which was green lighted by President Trump. Here’s a clip.

GRETA THUNBERG: We are standing up right now and we will not back down. Because we know what is at stake and we will never give up.

JAISAL NOOR: We’ll keep following this international movement for climate justice. For The Real News, this is Jaisal Noor.

In A Pandemic, The US Addiction To Incarceration Comes Back To Haunt Us

February 26, 2020
Sign Up for Our Newsletter
Help Us Make Real News!